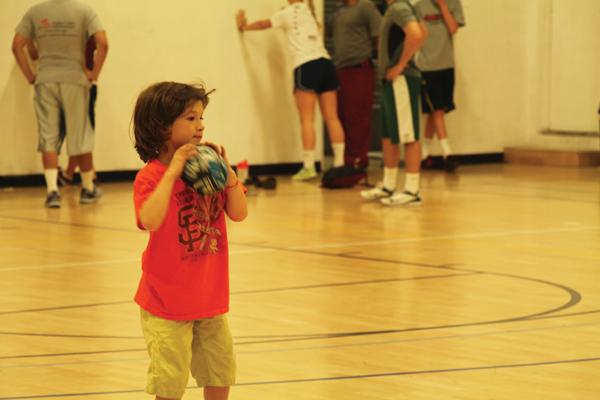 A boy prepares to throw a football on the basketball courts inside the center.

A small group of boys crowds into the parking lot of the Riekes Center for Human Enhancement, preparing for a game of basketball.

From one of the center’s many music rooms comes the faint chords of “Hold On” by the Alabama Shakes, as a local high school band seeks to discover its own rhythm and sound. The walls, painted in hues of orange and key lime, are covered by photographs which depict Riekes Center alumni in their moments of glory, and murals representing the center’s artistic talent.

The center, at 3455 Edison Way, Menlo Park focuses on creative arts, athletic fitness and nature awareness, and consists of a gym, batting cages, recording and film studio and an outdoor fire pit and basketball court.

The program serves people of all ages, offering activities that range from archery to photography.

Since the opening of the center in 1995, tens of thousands of people have walked the halls. But the core values of self-supervision, honest communication and sensitivity to others remain  the central focus of founder Gary Riekes, who aspires to infuse them into every aspect of the center’s operations. 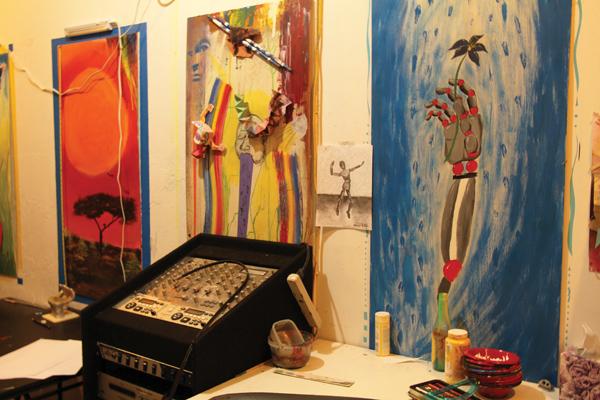 Members’ art hangs from a wall in the center of the art room.

A column of light shines on an old mahogany piano that sits in the corner of a narrow room. The sunshine highlights the tubes of paint resting on the keys and the paintbrushes that lie strewn across the top.

“This department teaches any kind of art — whatever you want to learn,” says Jonah Moshammer, a home-schooled senior and regular member of the center. “We can teach you realistic sketching, or really abstract art.”

The next room houses the Riehm Institute, which offers hip-hop, one of the most unique programs at the center.

“We do song-writing and beat-making here after school,” hip-hop and spoken word instructor Rahman Jamaal says.

“It includes elements like learning how to DJ and how to mix songs and use the turntables as a musical instrument,” Jamaal says, adding that the institute also teaches students to break dance and perform crowd control.

Upstairs, students learn how to print, enlarge and color their photos by hand in the photography room. The center also offers courses in Photoshop and cinematic arts.

While visual arts make up a large segment of the center’s area, there is also an emphasis on musical expression.

Paly students Remi Wolf and Chloe Zilliac, who perform together as the band Remi & Chloe, record in the studio regularly.

“The music program is really awesome,” Zilliac says. “It’s different than traditional music lessons, it’s student goal-oriented, which is a unique set-up. No other program could let us [Remi & Chloe] do this effectively.”

The center, which holds bimonthly recitals, encourages all age and skill levels to participate, allowing Wolf and Zilliac to work with a wide range of artists.

Performances are often semi-spontaneous, with rehearsals as short as five minutes. This impulsivity, according to Riekes, helps to build the community and talents.

One of the most popular activities is the “Fire by Friction” tutorial, which teaches the basics of making fire without matches. Most of the outdoor workshops are held at Huddart County Park in Woodside.

“It [the Riekes Center] has a big community emphasis, so we all learn how to work together and be part of a community while contributing our own personal self to it,” Moshammer says. “We do backpacking trips and a lot of team-building exercises and plant-animal identification and we play a bunch of games.” 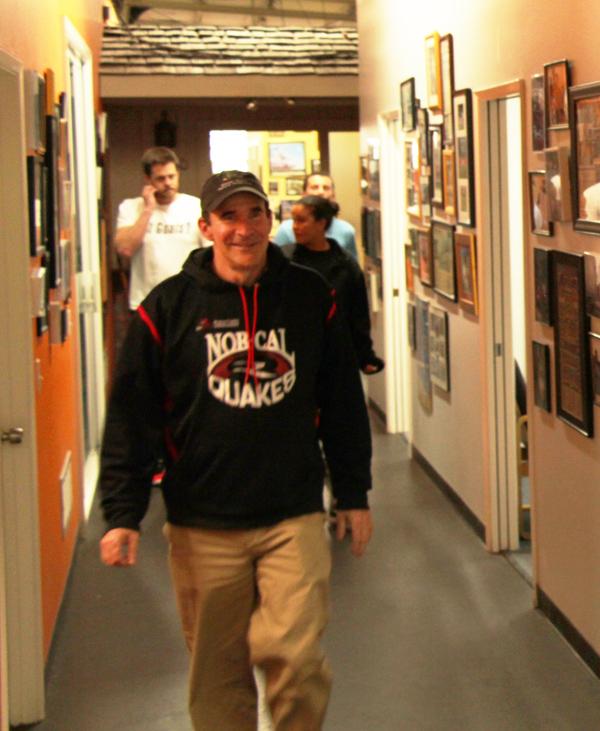 Founder Gary Riekes walks the halls and greets members along the way.

Riekes strolls around the floor of the gym and greets each member by name, asking them how their workouts and other activities are going.

He seems to know every person in  the center, which he says has 5,000 to 7,000 members. Everyone is greeted with a handshake, a smile and occasionally some questions on how they are accomplishing their goals.

On any given afternoon, the center’s extensive athletic facilities are sure to be filled with masses of students for afteschool workouts.

“People here can work out under different programs,” Moshammer says. “We have the CORE programs, so you get a folder and a trainer will take you through the first three workouts when you come and after that time you can decide when you want to come in by yourself and work out.”

Riekes, who initially aspired to be a professional football player, knows a lot about fitness. After being sidelined with a back injury, he decided that he wanted to help others attain their dreams.

The center, which Riekes initially conceived in 1974, consisted of little more than private lessons on athletic fitness, hosted in his own backyard. But it soon blossomed into an a multi-focus organization that required its own space, so Riekes moved it to its current location in a Menlo Park warehouse in order to pursue his vision. 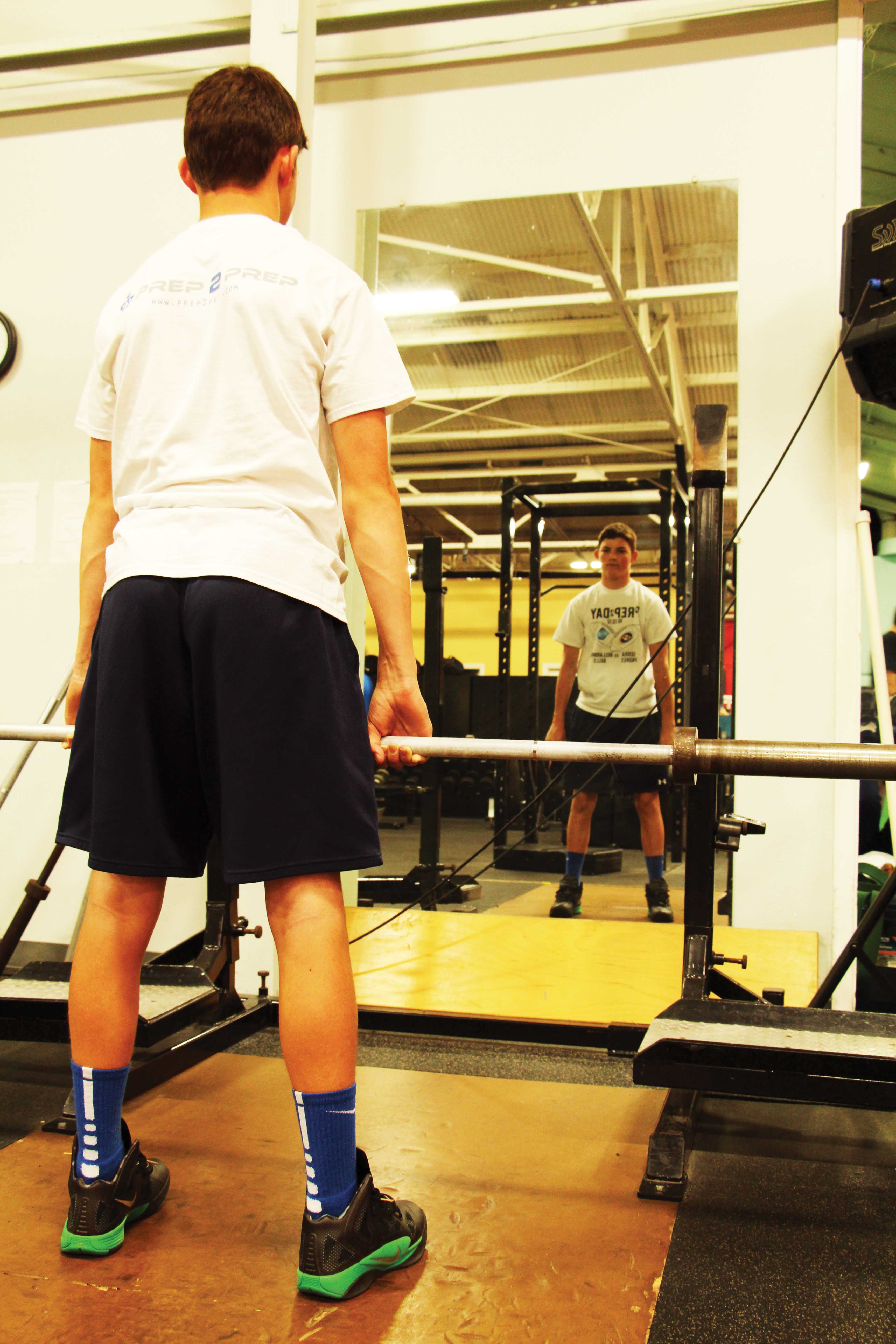 A member lifts weights while training in the exercise room.

At every possible moment, Riekes incorporates his own distinctive philosophy, which can seem unorthodox and at times, even silly.

“Say somebody’s in the hospital and we hear that they’re struggling,” Riekes says. “I’ll send someone and she’s going to give him a gift packet that has this [a fart machine]. And this is going to make him laugh.”

Riekes highlights this approach for its lack of pity. He doesn’t want anyone to feel sorry for anyone else, or feel burdensome. In fact, he says he only wants members who can dedicate themselves to making everyone feel valued.

“The only admissions requirement is that you make everyone feel important and comfortable,” Riekes says.  “It’s not a private club and there’s no exclusivity; it’s a place of non-judgment.”

Riekes’ fundamental message is one of teaching and acceptance. A veteran with only one arm can learn mouthpiece archery, in which the string is pulled back with the mouth rather than the other arm, and eventually then teach it to someone else, discovering, as Riekes says, a skill that “brings them joy” and then teaching others “that same skill and joy.”

As the dinner hour approaches, the basketball players leave, but the sounds of “Up, down!” and clashing weights continue fill the halls, along with chords signalling the start of guitar practice.

For Jonah Moshammer, Remi & Chloe and all of the other thousands of members of the Riekes Center, this is what it’s all about.

“It’s a place for whatever your dreams are,” Riekes says. “You should be free to explore.”