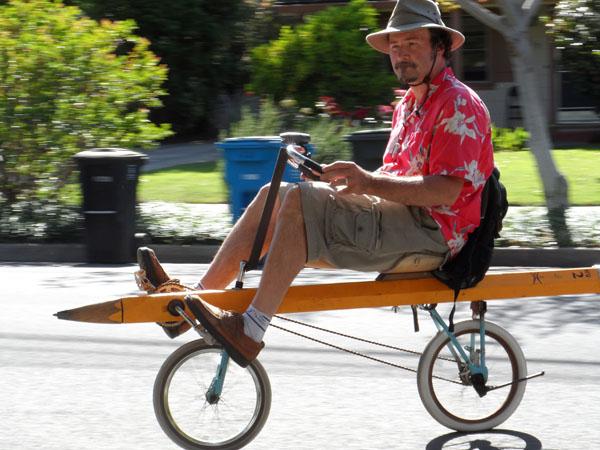 Tom Kabat on the pencil bike. The eraser even erasers.

Tom Kabat is used to pointed fingers and gawked mouths as he rides down the streets of Palo Alto. Kabat knows he’s asking for it though, with his quirkly shaped contraptions. From spliced parts of scavenged bikes, skateboards, rollerblades, and more, he not only fixes, but enhances and builds new vehicles. Kabat does not sell his creations, but simply finds enjoyment in making a fully functional, original invention.

“I used to look at antiques a lot,” Kabat says. “ But after I biked across the country and became much more interested in bikes.”

Kabat begins the process of building a bike by dumpster diving at Stanford University. It takes Kabat about a week to finish most bikes, a majority of the time spent thinking and engineering the bike design.

“Once there were some Stanford music students that were carving up bikes to make musical instruments,” Kabat says. “They were just going to throw away the old pieces, so I offered to take it off their hands.”

The complicated designs combining skateboards, bikes, skis, and scooters all come to life through an experimental process without blueprints or rulers.
“I can usually make do with using cardboard cutout [of parts] as measurements,” Kabat says.

In contrast with Kabat’s obscure bikes, the purple curtains and silver hubcaps of a Hearse catches the eyes of many  in the Palo Alto community.

“You could call the hearse an impulse buy,” says Clark Vineyard, a Palo Alto High School Alumnus and current car mechanic, “I was like a kid in a candy store. I bought it on Craigslist just an hour after making an initial phone call.”

Originally abandoned in a self-storage yard in Campbell, the hearse was a rusty gray color in need of a lot of work.

“I look at my hearses as having performed their grim duty for years and now retired to the next, more relaxed phase in their lives,” Vineyard says regarding it’s unknown past as a funeral car.  “Though they [continue] to carry their mystique with them.”

Vineyard’s interest in automobile engineering began when he was just 14. Vineyard, who has worked in several restoration shops, fondly remembers Auto Class at Paly with Teacher Doyle.

“While I threw away most of my other high school work,” Vineyard says, “I admit I do still look at my Auto notes from time to time when restoring a car.”
Vineyard acknowledges that most of the money spent in the restoration business is in returning the cars to their original factory condition, but this type of restoration is not always possible.

“I spend enough money on a car to make it worth it for the buyer to spend,” Vineyard, “ But the cars are getting more and more rare. Sometimes there have [already] been too many changes made by [a previous owner] that I just enjoy the car in its new form.”

Of the 12 different cars he owns, four surround his house: a black matte chevy, a 1964 Cadillac with zebra print seats, the Hearse, and a tan 1963 Cadillac. Having eccentric-looking cars is enjoyable, but Vineyard still believes a cooperating car is key.

“The 1964 Cadillac is my favorite,” Vineyard says. “It is a loud, fun, statement car that is extraordinarily reliable.”

Although finding enough space to park all his cars can be a challenge, the inconveniences are overlooked.

“People love the nostalgia and react well to seeing classic cars driving around,” Vineyard says. “The attention and appreciation from people when I drive is a big payoff.”