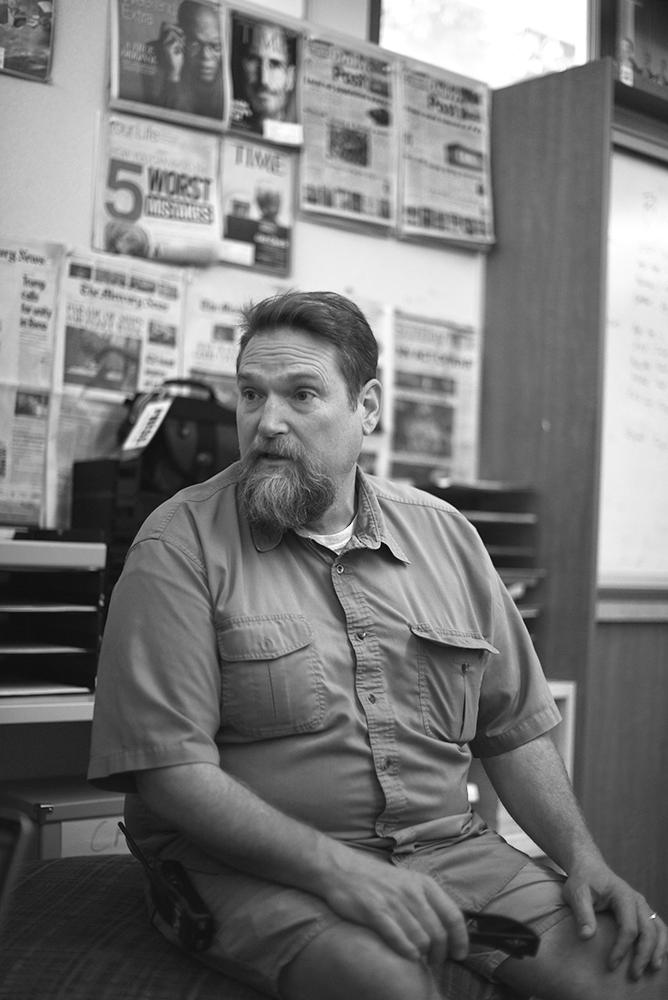 Respecting While Protecting: A Piece of the Puzzle that is Campus Security

The whirl of the golf cart and the blare of a walkie talkie signal the impending arrival of campus supervisor Carl Hubenthal. Carefully removing the sleek sunglasses from his eyes and placing them on the top of his head, Hubenthal jumps off his golf cart and makes his way into the student-filled Media Arts Center to do what he does best: ensuring student safety.

Although classes start at 8:15 a.m. Campus Supervisor Carl Hubenthal’s day starts much earlier. As early as 6 a.m., Hubenthal comes in to check the campus for anyone who should not be there. According to Hubenthal, homeless people who take the bus to the Opportunity Center on the other side of Town and Country often get lost and wander onto the campus, posing a security risk.

“I’ve found people who sleep here that I have to ask to leave,” Hubenthal says. “Once there was a man in between the PAC [Performing Arts Center] and the MAC in that little area who was enjoying himself with an [alcoholic] beverage. Getting him to leave was pretty hard, I had to get backup and eventually call the police.”

Hubenthal says he began his career as a bouncer at a “seedy” bar in Oregon. There, he first gained experience in handling unruly people and adopted the philosophy he uses every day as campus supervisor.

“Everyone basically wants to be treated with respect,” Hubenthal says. “If you come at anyone with respect and be nice to them you get a much better response than if you come at them very authoritatively.”

Throughout the day, he patrols the campus in his golf cart, delivering messages to classrooms or looking for students cutting class. For Hubenthal, maintaining student safety is about much more than just physical protection; it is about safeguarding students’ mental well-being as well.

“I usually patrol the entrances, and look for people that shouldn’t be there or students who should be in class,” Hubenthal says. “But I also look for students who may be crying or look sad, and I pick up those kids and take them to the Wellness Center.”

In the wake of school shootings and  Paly’s recent lockdown, Hubenthal says he continues to evaluate his actions as well as his own safety as campus supervisor.

“It’s scary because you know that in Columbine, the first person who was killed was a campus supervisor,” Hubenthal says. “That’s why I try to be very nice and respectful and, you know, don’t be angry or forceful with anyone if you don’t have to be.”