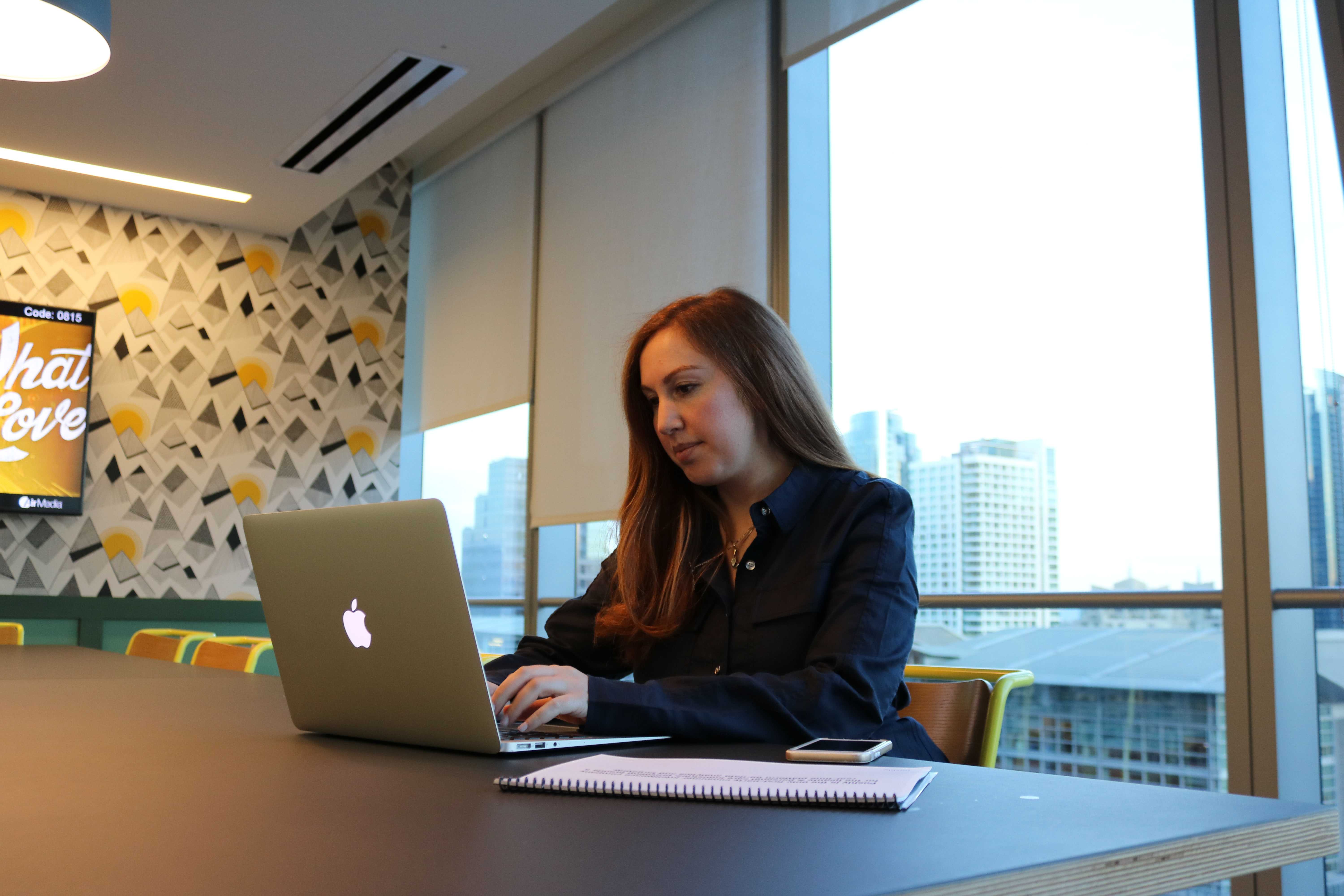 The office space is a hipster’s dream. As a low hum of activity permeates throughout the space, industrial metal beams frame a stunning city view of the San Francisco Bay and Mission Street. Inside the building, people gather around a tea and coffee bar, to stave off caffeine withdrawal. The office is divided by glass walls, and each area is designed with geometric wallpaper sporting funky colors like lime-yellow and mauve.

This office represents a new idea, a communal office space — one shared with many companies. So, the studious twenty-somethings, faces illuminated by wafer-thin computers, are from a completely different company than the entrepreneurs dressed to the nines playing ping pong. The space, owned by We Work is rented  to companies, like Poshly, founded by Palo Alto High School alumna Doreen Bloch.

Recently featured in Forbes’ annual feature “30 under 30,” and winner of L’Oreal’s NEXT Generation Women in Digital Award, Bloch  is making a name for herself in the tech world. Poshly is an online company that has users answer personal beauty quizzes to help brands develop new products. In exchange, participants are entered in raffles for beauty and lifestyle products.

After graduating from Paly in 2006, Bloch attended the University of California, at Berkeley to study business. Due to her stint as Editor-in-Chief at Paly’s online news publication, The Paly Voice, she looked into joining a publication staff at Berkeley, but decided not to when she realized she would need to start at the bottom regardless of her previous experience. Instead, Bloch founded Bare Magazine, an online and print fashion and lifestyle magazine, in 2007.

“She [Bloch] is the kind of person that if she has an idea, she’ll go for it and there’s nothing really stopping her from going for it,” says senior Adele Bloch, Doreen’s sister.

Though she is a serious worker, Bloch can always have a laugh with her coworkers and almost always wears an enthusiastic smile.

“At the office, she has the nickname ‘Dbot’ because of her automatic attention to detail, vigilance and laser constant focus,” says founding data engineer at Poshly, Matt Drescher.

The idea for Poshly came from Bloch’s love for both beauty and digital elements. She also believed that the idea of a beauty company based solely online has potential. After working in the finance world as a strategy analyst at SecondMarket, Bloch realized she wanted to do something more innovative and creative.

“What initially attracted me to Poshly was that its mission is very transparent and really all about helping people have a fun time finding products they will love,” Drescher says. “I found Poshly to be a pretty refreshing angle.”

Using her knowledge of the tech

ld to create her company seemed obvious to Bloch because of the lack of digital presence of the immense beauty industry.

“It [the beauty industry] is a four-plus billion-dollar industry,” Bloch says. “Each and every person buys these products, whether they think they are an avid personal care consumer or not.”

While the process of establishing a business seems intimidating, using advice from friends and family, Bloch was able to use resources and contact companies to found Poshly.

Bloch describes Poshly as a place where people can discover great new products, regardless of their price.

“On the brand side, we want them [the clients] to think of us as the go-to place to look at consumers needs and preferences and hopefully make better product development decisions based off of that,” Bloch says.

Although problems arise in times of crises, Bloch attempts to deal with her doubts in a positive way.

“Doubt and anxiety I find to be very interesting human emotions in that they can be very destructive but they can also be extremely productive.” Bloch says.

Despite facing naysayers who didn’t believe in the viability of her company, her determination to see her company succeed outweighed any doubts.

“At Poshly, we are very big on encouraging, supporting and celebrating personal growth, and that whole focus, as far as I am concerned, comes from Doreen,” Drescher says. “Yet, when a problem arises in the server, Bloch is able to take a step back and try to look at the problem from another angle.”

“As the claws of panic started to be felt, … I will never forget Doreen, who was also quite flummoxed but just collected herself, furrowed her brow and said ‘Okay. I think we should eat some pie,’” Drescher says. “As we were on our second slice, the pieces of the puzzle started to fall into place. Sure enough everything was back up and running and everyone was happy. It was a great grace-under-pressure moment.”

Bloch is regarded as an inspiring leader of the Poshly team by her employees and coworkers. Regardless of the situation, she always keeps it together.

“She really believes in what she is doing and she stops at nothing in going after what she wants to accomplish,” Drescher Says. “She really doesn’t compromise very much at all when it comes to making things that are awesome.”

Now, Bloch is “bi-coastal,” spending time in both New York and California. While she sometimes lives in New York, she was born and raised in the Silicon Valley.

“Almost every Sunday, she makes sure to come home and spend time with family,” Adele Bloch says. “The other day we had a four-hour karaoke night, and it was just her and me singing for literally four hours. She’s very family orientated.”

Bloch credits much of her business’s success to her experiences in the Paly Voice. Along with her internship at Yahoo over the summers of 2006, 2007 and 2008, Bloch had help being launched into the the tech world.

“Having those classes at the highschool level really is one of the only hands-on experience kind of classes you can get in high school at Paly and otherwise,” Bloch says. “We’re very, very, very privileged to have that kind of program and the kind of teachers that we do.”

Bloch’s time in the Silicon Valley has given her new insight on what the tech world is and what it is becoming.

Although Bloch didn’t pursue a major relating to the tech industry, she found it a necessity to have Poshly as a digital business due to the quickly-growing online world. She is constantly reading books about coding to become more knowledgeable on the inventive new world of tech.

“I very much encourage people who are intimidated of anything technical to just take the time to read about how it has come to the point of where it is today,” Bloch says. “I think we are … in our infancy of this tech boom revolution.”