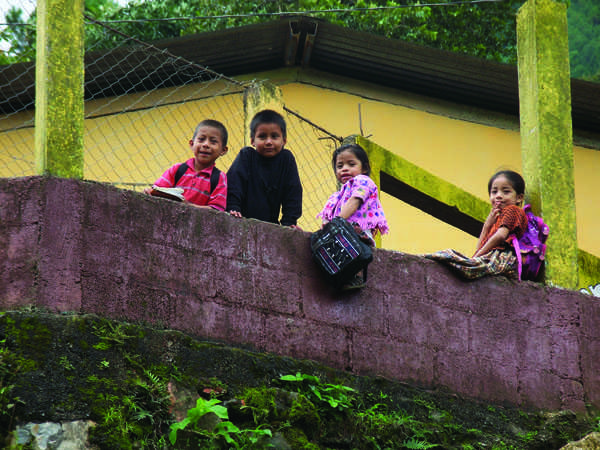 VOLUNTEERING: Guatemalan children from the school wait outside to begin their day of school.

In the tropical mountains of Tamahú, Guatemala, a small school of anxious learners and hopeful children aspire to make a better future for themselves.

Trilingual teachers travel from hours away to inform children suppressed by their familys’ poverty. At the end of every day, students come home got dinner eager to teach their siblings simple ideas like the brushing of teeth or how to wash their hands correctly.

Three thousand miles away, stressed-out Palo Alto High School students spend their evenings struggling to finish the last of their homework into the early mornings.

Friends of the Poor is a charity organization that created a Guatemalan school focused on bridging this gap between youth of Guatemala and Palo Alto. Ana Marshall, current president and daughter of the founder of the charity, has created a network of volunteers that are reaching out to Palo Alto students. Marshall aims to teach students palpable skills so they can individually learn how to make a difference in a world completely different than their own.

“[The project] helps [Palo Altan students] to understand the limitations of what can be done and to work alongside locals instead of coming in from the U.S. with lofty and very American ideas,” Marshall says.

Castilleja student Meghan Colford’s family has been a part of the program since its founding and she is currently a regular teen volunteer.

“At the meetings, we generally talk about future projects, such as fund-raisers and events,” Colford says. “We also discuss our own personal projects.”

The program involves mandatory bimonthly meetings at the Marshall household, and culminates in a week-long summer trip to Tamahú, a city in central Guatemala.

The local children benefit from the extra volunteers, but the trip means even more to the teens. In Tamahú, they are finally able to see what their work has done and the reality of the situation in the community.

“[Our main goals are] to instill in the teens a commitment to social justice work throughout their lives,” Marshall says.

Paly junior Yumi Temple has been involved with Friends for the Poor for six years now and is currently the student vice president of the organization.

“I joined because I was curious about philanthropy and how teens today can create substantial positive change,” Temple says. “I continued with the project because I felt like [the teens on the team] were getting a really rare opportunity to change the world we live in for the better.”

Temple finds that this organization uniquely allows teens to help for a greater good.

“It’s really hard to find organizations that recognize the strength and capability of teens, and give you so much power and freedom in the running of a project,” Temple says.

Temple felt she really benefited from the bimonthly meetings, but it was only when she reached Guatemala that her eyes opened to the severity of the situation, especially after volunteering at the local medical clinic.

“My first year, I had two girls that I was looking after,” Temple says. “I was super freaked out about helping at the clinic. I just kept thinking, these kids have diseases. I was worried about catching something or even making them sick. I didn’t know about taking care of kids with special needs. The girl was blind and had a tumor in one eye.”

However, the program leaders helped Temple remember what she had done to prepare for the trip and gave her the confidence to face her fears.

“I finally went in and realized they were the sweetest, cutest little kids,” Temple says. “One of the girls, Elsa, was left by her parents who thought she was a devil child because she kept having seizures. But by the time we had shown up she was fattened up and was a totally cute attention hog.”

Friends of the Poor doesn’t focus only on youth education, but also on total rehabilitation of the community. Even though only one kid from each Guatemalan family is allowed in the school at a time, the education has a snowball effect.

“We collected a lot of data from our first trip,” Temple says. “We saw the kids are teaching their families all of the things they are learning in schools, so it is not just affecting the kids in the school. The teachers and nuns are getting jobs and they are taking that money to help their families.”

Friends of the Poor records data from the trips to help them  best to rehabilitate the school and clinic. For example, its research has shown a gender gap in the roles for rehabilitation.

This student-run approach gives students the ability to gain an appreciation of the work that goes into running a charity and discovering their individual potential.

“We also educate Bay Area teens in how to be global citizens and community leaders, not tomorrow, but today,” Temple says.

While many teens are looking for a way to fill up their college applications with extraordinary deeds of good merit, Friends of the Poor’s commitment time ensures teens’ good intentions and dedication to the cause. Temple and Colford are both disappointed that teens join charities for college applications.

“Community service is about opening up space in your life and your heart for someone else,” Temple says. “It’s about extending your sphere of empathy and consciousness to focus on someone that isn’t you, and helping to lift someone else up.”

Colford reiterates the Tamahú Project’s impact on her education.

“We are learning what it means to be philanthropists and how to go about making a difference in something we really want to see change,” Colford says. “Yes, being a part of the Tamahú organization means doing charity work, but it also means learning about giving back to the world in any way you see fit, ensuring that you are not just doing, you are also learning.”

The influence of the Friends of the Poor in Tamahú is showing that teenagers in the Palo Alto community that they have the potential to make a progressive change, Temple says.

“We are slowly breaking the cycle of poverty by allowing these kids to reach high levels of education and then higher levels of jobs so they can continue the process.”