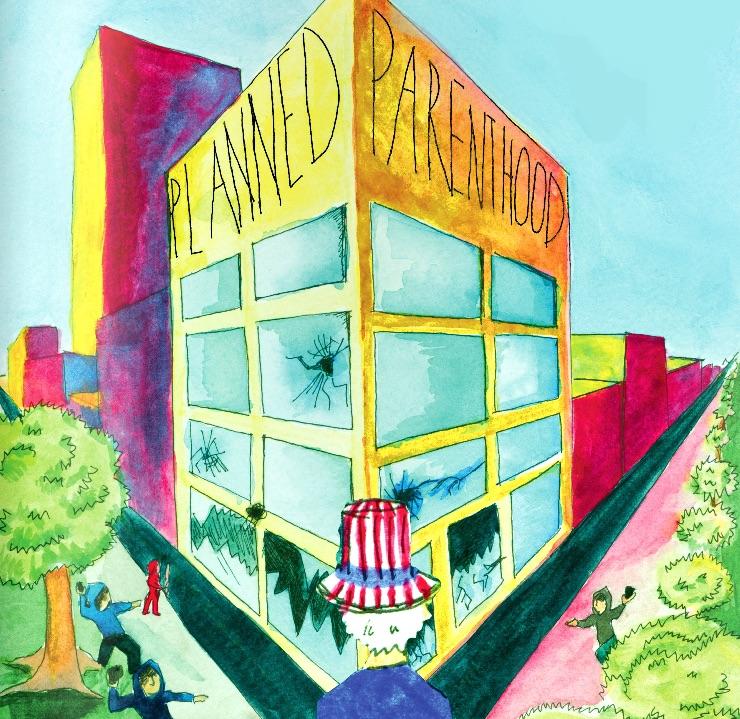 “I have to hide 13 packs of birth control from my parents,” says Audrey, a Palo Alto High School senior whose name has been changed to protect her identity.

Audrey and her boyfriend have been sexually intimate for the past two years, however, her parents don’t know about her sex life, so she hides her oral contraception from them any way she can. She tapes pills under picture frames, hides packets underneath her drawers and stores birth control at her boyfriend’s house.

“I get pretty creative,” Audrey says. “My mom is Catholic, so she doesn’t believe in sex before marriage. If they [my parents] found out, I would probably have to break up with my boyfriend, and I just would not be happy.”

Despite the fact that it is difficult for Audrey to keep her sex life a secret from her parents since she needs to take the pill daily — she prefers not to use condoms as a sole method of birth control because she is afraid they will break during sex. Instead, she goes to Planned Parenthood to get more effective contraception.

Two years after becoming sexually active, Audrey still frequents the Planned Parenthood in Menlo Park, going in yearly to pick up birth control pills and to get tested for sexually transmitted diseases and pregnancy.

The general public often overlooks these services, and Planned Parenthood’s involvement in the tense abortion debate as an abortion provider has made it a target of anti-abortion advocates’ ire. This summer, the Center for Medical Progress, an anti-abortion activist group, released a series of covertly filmed and edited videos that show Planned Parenthood personnel discussing the donation of fetal remains from abortions to research. This triggered a political response so robust that on Sept. 18, the United States House of Representatives voted to defund Planned Parenthood. While the United States Senate voted against defunding the organization on Sept. 24, and a shutdown was averted on Sept. 30, the issue of Planned Parenthood remains prominent in politics.

“I went to Planned Parenthood because I had gone to my parents to ask them for birth control,” Sarah says. “I needed it for my period length — they were lasting 10 days — but they said that until I was sexually active, they weren’t going to put me on it, and that’s just awkward, so I went so they wouldn’t know.” 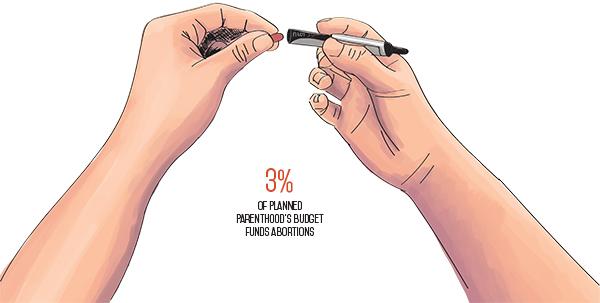 A student hides a birth control pill inside of a pen

Now, Sarah gets birth control from her regular doctor.

“My parents actually found my birth control and surprisingly, they weren’t mad at me,” Sarah says. “They realized that if they didn’t get it for me, I would get it myself, so they kind of decided that they’d rather be more in the loop. I got a gynecologist and I got a different set of pills, but they do the same thing.”

Catherine, a junior whose name has also been changed to protect her identity, went to Planned Parenthood for many of the same reasons that Sarah originally did.

“I was [sexually] active with my boyfriend, so I just wanted to be safe,” Catherine says. “It was a scary thing for me to go, but they were very nice there. I knew that if I went to a doctor’s office, I would have to tell my parents and I didn’t know how my parents would react. I wanted to stay secretive about it.”

Planned Parenthood provides confidentiality to all individuals who use its services. Before this year, when a patient went to his or her health provider using his or her parent’s insurance, the insurance company could send back an explanation of benefits to the patient’s parents. This would tell the parents why their child had gone to the doctor’s office.

However, with the passing of California’s Senate Bill 138 earlier this year, minors can prevent their insurance companies from sending the explanation of benefits, which grants students the ability to procure confidential birth control from their own doctors.

“I was [sexually] active with my boyfriend so I just wanted to be safe. It was a scary thing for me to go.”

Aside from confidentiality, however, Planned Parenthood’s offer of services to those who cannot afford them allows students such as Audrey, Sarah and Catherine to obtain birth control. Oral contraception costs between $160 and $600 per year. Without parents providing money, the cost of buying birth control can be daunting.

“I asked my friends, ‘Oh, do you have to pay [for contraception]?’ because birth control is expensive,” Audrey says. “I did not expect them [Planned Parenthood] to give it for free. All they asked for is a donation, which is really nice. The lack of cost and the anonymous part is really appealing.”

Brown agrees that Planned Parenthood plays an important role in providing teens with reproductive health services as well as general health services; however, her one concern is that teens are unaware of the services available to them.

“I think most people know they can go to Planned Parenthood, because … people are used to hearing about them,” Brown says. “But in general, I don’t think teenagers understand where to get information.”

Audrey and Sarah both learned about Planned Parenthood and its services from their friends, who also used it for contraception.

“It was Audrey actually that introduced me to Planned Parenthood,” Sarah says. “I knew about it from Living Skills [health class] but I never actually considered doing it until I saw my friend do it and then I saw how easy it was, so that’s when I went.” 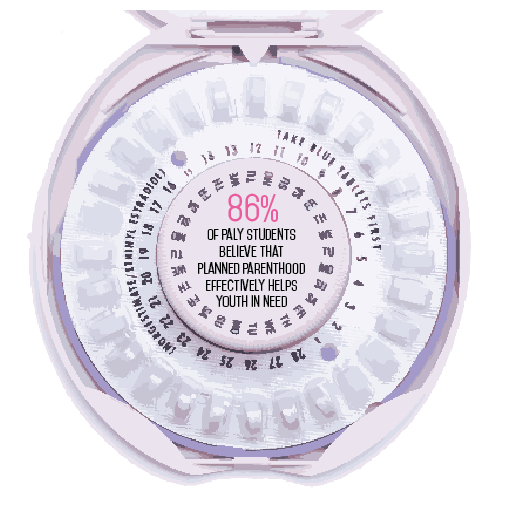 Planned Parenthood’s additional services — the health services that make up the majority of what it provides — also deserve attention.

Other students use Planned Parenthood for general health needs because its services are more convenient and often take less time to secure than a regular doctor’s appointment. However, the political debate and the potential shutdown of Planned Parenthood affects these students, such as junior Layla Solatan just as much.

When Solatan registered for high school in Palo Alto after moving from a different city, the school district refused to let her enroll until she received mandatory vaccines.

“I had already missed about a week of school,” Solatan says. “I couldn’t start without getting the vaccinations first and … I couldn’t go to a doctor because I would schedule an appointment and it would take a few days or something so I wouldn’t have been starting school for another couple weeks.”

Because all of her other options would have taken too much time, Solatan turned to Planned Parenthood, the only local clinic that would allow walk-in vaccinations. “It was really awkward being in there [Planned Parenthood],” Solatan says. “Typically, when you see teenagers at Planned Parenthood, people assume something and so I felt judged by that, [but] this was the one where I could go in that day and just start school the next day.”

Without Planned Parenthood, Solatan would not have had access to the quick healthcare she received.

“I think it definitely [has] a very supporting role, especially for girls,” Sarah says. “It definitely reassures me and some of my friends to know that we have that alternative if we ever need to get pills or get Plan B or do anything and if we can’t get it for whatever reason, we know we can go to Planned Parenthood and get that help. I don’t think it encourages sex because the girls I know that go there would have sex whether or not they were taking the pill, but I would definitely say that it encourages safer sex.”

Planned Parenthood is not the only healthcare center that focuses on reproductive health.

Real Options is a collection of centers that provides pregnancy care and counseling for women who are uncertain about what choice to make considering their unborn child, but that does not offer abortions or contraception. Shirley Poitier, the director of Real Options’ Healing of Post Abortion Program, encourages teens to make informed decisions about what types of choices to make concerning their reproductive health and their pregnancies.

Poitier also thinks that teens should make an informed decision about where exactly to receive their care. She believes that people should do thorough research on their options and on what Planned Parenthood offers, so as to choose the organization that better fits their individual needs.

“I think that people are going where they can be best served to a place that meets their need,” says Poitier. “So why they would come to Real Options is because we are confidential and focused on helping the whole woman.”

“Don’t let politics trump medicine. … Keep the government out of the uterus.”

Without Planned Parenthood to rely on, teens across the country would be confronted with the issue of privacy, while those of lower income backgrounds would also lose access to their primary source of affordable primary and reproductive healthcare.

“By taking away Planned Parenthood clinics and family planning clinics, there will unplanned pregnancies, there will be more abortions,” says Sophia Yen, a professor at the Stanford School of Medicine specializing in adolescent health. “There will be people dropping out of school. To me, every teenage pregnancy is a shattered dream. I don’t think any teenager meant to get pregnant during their teenage years. They were hoping for bigger, better things.”

The politicization of women’s health

Thrust into the larger spotlight of the pro-life versus pro-choice debate, Planned Parenthood defends its stance by emphasizing the multitude of health services they offer to women and men all over the country; however, the predominantly Republican side that aims to defund the organization argues that Planned Parenthood’s alleged selling of tissue from aborted fetuses is an action worthy of retaliation, using the videos released last summer to bolster its argument. Planned Parenthood, on the other hand, denies any wrongdoing.

“We unequivocally deny that any of the allegations made against the organization are true,” says Lupe Rodriguez, director of public affairs at Planned Parenthood Mar Monte. “We are constantly audited and examined by the government and other organizations for our practices, both medical and the option that has been highlighted [in the videos], the facilitation of the donation of fetal tissue to research that our patients choose to do [has been approved by the government].”

According to Rebecca Griffin, assistant director for California programs at NARAL Pro-Choice America, the negative reaction to Planned Parenthood is a continuation of the pro-life agenda. 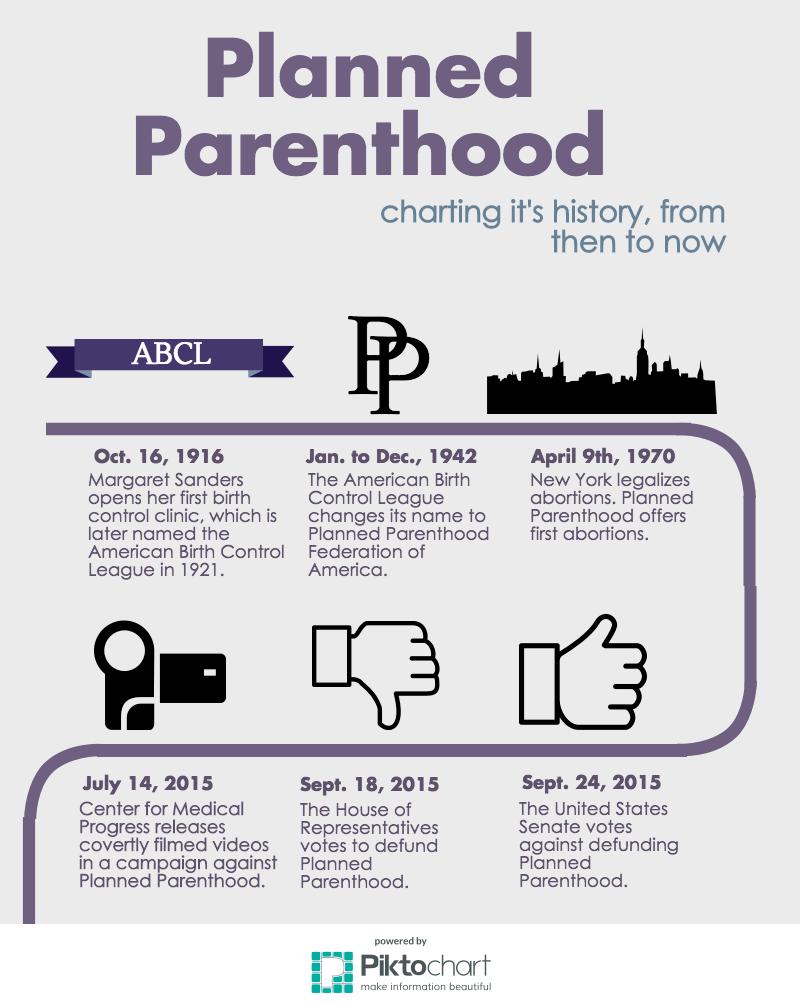 “They are using this as another opportunity to go after an institution like Planned Parenthood that is immensely popular and a place that a lot of people rely on to give them a grand stand on these issues,” Griffin says. “It gives them an opportunity to just keep pushing this agenda and trying to again put the pro-choice movement back on its heels, which is why it is really important that we push back.”

Griffin’s points bring up the issue of the polarization of women’s health. Like many other subjects in our political sphere, reproductive health and abortion has fallen into the partisan mold of Republicans versus Democrats. However, with a multifaceted dispute as personal as contraception and abortion, there are more sides to the story than simply “pro-life” or “pro-choice.”

“I see that people choose abortion because they are stressed out,” Poitier says. “They choose abortion thinking that it’s the easiest thing … I am pro people making a choice that they’re not in a position that they have to choose to end a life.”

To Yen, the solution to the debate is simple.

“Don’t let politics trump medicine,” Yen says. “Leave medicine to the doctors, leave personal health decisions between a patient or doctor. Keep the government out of the uterus.”