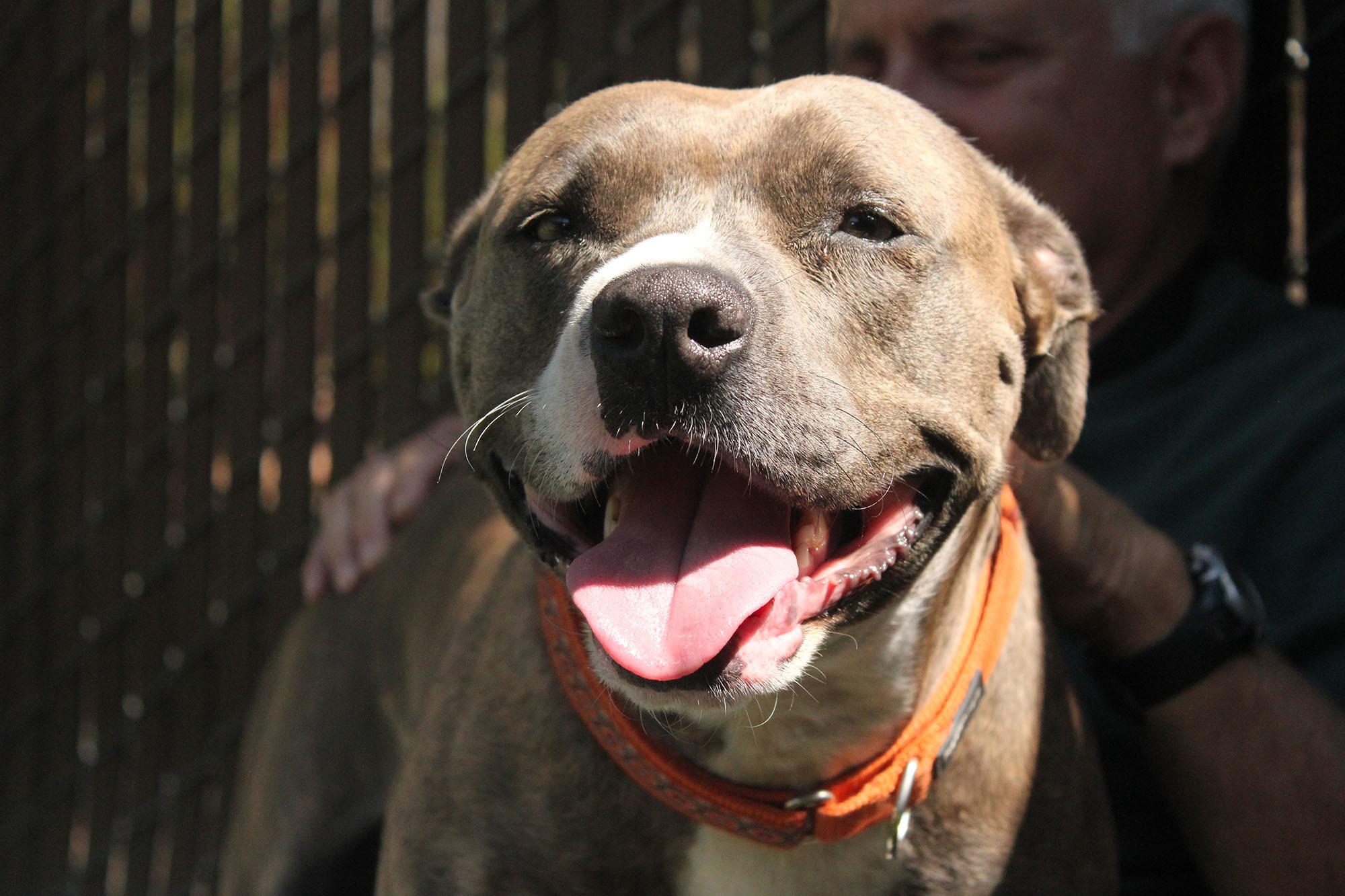 Plight of the Pitbulls

She blinks at me with her hazel-brown eyes, her tail a blur, wagging in eager anticipation, the corners of her ears flopped over. She sniffs at my outstretched hand and licks my fingers with her warm, rough tongue.

Wendy is always the first one I greet and the last one I say goodbye to when I volunteer at the Palo Alto Animal Services every Thursday. She is a big dog among a crowd of small dogs, and the only calm one among a clamor of excited ones.

She is also a pit bull.

When most people hear “pitbull” they think: vicious, innately mean and people-hating dogs. But the reality is, pit bulls are simply misunderstood.

The first time I volunteered at Palo Alto Animal Services was the first time I had ever come into contact with pit bulls. I love animals, especially dogs, and while I was eager to meet Wendy and Baloo, both American pit bull terriers, there was a little voice in my head saying, “Pit bulls? Remember what you read in the news? They’re dangerous.”

That little voice could not have been more wrong. Pit bulls are not the innately monstrous creatures the media portrays them as — in fact, Wendy and her fellow pit bulls are the exact opposite.

At one point, pit bulls were considered the perfect “nanny dogs.” They were ideal family dogs and were known for being especially calm and affectionate. So what happened?

While some pit bulls are trained to be vicious, statistics are often skewed in favor of the stereotype that all pit bulls are born evil. These numbers are often taken from biased media sources whose goal is to create sensationalized and exaggerated headlines, as opposed to being factually correct. According to a 2008 study conducted by the National Canine Research Council, a labrador retriever attack in Arizona was reported by only one newspaper,  while a pit bull attack in California received international attention from more than 285 media sources.

The American pit bull terrier actually scored very well in an experiment testing friendliness, protective instinct and stability in an experiment done by the American Temperament Test Society. They had the second highest score with an 86.8 percent pass rate, only bested by Labrador Retrievers with a pass rate of 92 percent. These results indicate that pit bulls, contrary to myth, have very good temperaments and are not as innately aggressive as the media has painted them to be.

Given the obvious inaccuracy of stereotypes against pit bulls, the breed should not take the bulk of the blame for such myths. Townsend Brady, a volunteer at PAAS who has trained Wendy at the shelter and is pit bull owner himself, agrees that the dogs are not at fault.

“We should hold the human beings responsible,” Brady says. “Dogs want to please you. They [pit bulls] are taught to be vicious.” The ASPCA agrees, saying, “pit bulls often attract the worst kind of dog owners.”

And thus a ruthless cycle is born.

“We should hold the human beings responsible. Dogs want to please you. Pit bulls are taught to be vicious.” - Townsend Brady, volunteer and pit bull owner

Evidently pit bulls are not innately the monsters the media paints them to be — Wendy is living proof that if caregivers take responsibility for training and loving pit bulls, they can be great household companions.

“She is very people-oriented, and contrary to the myth, she is very friendly and has a sweet disposition,” Brady says. Wendy’s a super sweetheart.”

At the end of the day, dogs are like people. They need care and love and in return can be affectionate and loyal. Pitbulls deserve to be judged based on individual personality.

Wendy has received the attention that all dogs deserve, and she is a pitbull ambassador. She has shown me and many others what pit bulls are capable of being — affectionate, loyal, playful and non-aggressive.

Wendy sits on the bench next to me. She turns to lick my face, and when I turn to look again, the corners of her mouth are curled upwards: she is smiling.