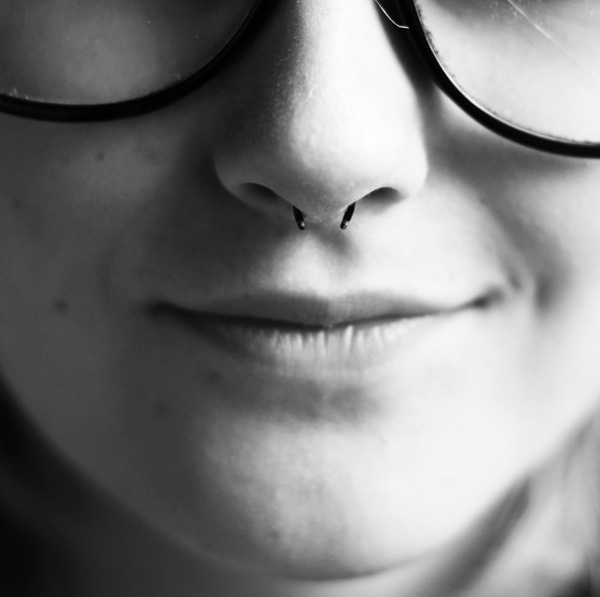 Flashes of silver catch the light as exposed bellies and backs are shown off in the open. Men, women, girls and boys 15 and older move from one person to the next, admiring and comparing the small jewels, studs and rings adorning assorted body parts.  Metal hoops cling to slender backs, as hooks thread in and out of semi-exposed flesh. It is a Saturday night in San Francisco and a group of body modification aficionados, each with their own story to tell, has congregated near a strip of piercing parlors in the Haight-Ashbury district.

“Like many kids my age, I have an interest in piercings,” says Brianna, 16, a Menlo Park resident and piercing devotee, who along with other sources in this story, has asked that her last name no be used. “My most beloved of them all is my [Marilyn] Monroe piercing [simulated beauty mark above upper lip]. While most girls get their belly buttons pierced, I have an interest in piercings that are not so common.”

This quest for the less traditional seems to be the driving force behind many piercings, but sometimes it’s accompanied by an impatience which can lead to a disregard for the law. Although she is now 16, many of the piercings Brianna had done were illegal.

California state law dictates that one can receive a body piercing starting at age 16 with written consent by a parental guardian. People 18 and older can receive piercings after showing acceptable state issued photo identification that proves their age.

Parlors can enforce laws differently for their individual sites so long as they enforce the age limit.

“Our parlor, specifically, doesn’t even allow minors [under 18] to get any sort of piercings or tattoos,” says Deana Wardon, a piercer and tattoo artist at Tattoo Boogaloo in San Francisco. “We just don’t want to deal with the hassle of all the paperwork we would have to go through, and the risk of going outside the ranges of legality rises exponentially once you open that door [allow minors to come in].”

Many parlors in the Bay Area do not want the legal risk, which disappoints those minors who travel to San Francisco in hoping to bend the rules in terms of piercing legality.

While this is the case for the majority of sites in the Bay Area, some parlors choose to take their chances and disregard the law completely, which is how many underage kids end up with so many piercings.

“I’ve been getting piercings since I was 15,” says Julian, a Palo Alto student whose name has been changed. “I just walked into this place in San Jose and asked to get one, and they let me.  It’s not as if I brought a fake ID or anything, but they didn’t ever ask.”

Others feel they don’t exactly know how their piercing interest started, and admit to some feeling of ignorance when looking back at the moments they decided to start piercing.

“The reasons that motivated me when I’d had them done seemed so totally stupid and irrelevant, to say the least,” Angela, 19, says. “The scar from my chest piercing is a constant reminder of a fight with a friend, and other scars point to a relationship gone bad.”

Lisa Dimarino, a psychologist at the Pacific Wellness Center, offers insight on the piercing phenomenon.

“I hear this topic come up a lot,” Dimarino says. “They want to feel individual, or have control over something. It may also be attributed to ritualized behavior, just as cutting is, however it is probably different for each person.”

In these instances, parlor employees feel they do a decent job of veering minors in the opposite direction. “Every so often we’ll get someone underage coming in asking for permanent corset piercings [a set of rings placed into the body, through which one threads ribbon, simulating a corset], or an order for piercings meant to cover the face entirely,”  says Mackenzie Mullen, 20, another artist at Tattoo Boogaloo. “But I normally give them one look over, and it’s obvious that they’re not even over 18, so I turn them away.” Mullen and Wardon express their concern with the rising trend in odd piercings among teens.

“We have always gotten people who come in asking for the ‘new’ weird piercing trend,” Wardon says. “But I’ve definitely noticed a recent growing appeal for the bizarre and uncommon trends.”

According to Wardon, a tattoo or a stereotypical piercing — one on the nose, ears, eyebrows or belly button — used to be the standard order for parlor-goers.  However, new ideas for piercings seem to be formed every day.

“Piercings are an art,” Mullen says. “Sometimes I feel like the rapid spreading of the culture into the younger generations, and on top of that with their own rebellious twist, is invalidating this art form.” This rebellious twist is seen through high risk piercings.

“I got my zipper piercing about a year ago, but it didn’t exactly turn out as planned,” Jacob, 18, says. The zipper look, a set of piercings placed along a slit in the tongue simulating a zipper, is a new favorite among the modification crowd, according to Jacob. “I thought it would be cool. As soon as I heard about it, I knew I wanted to get it.  But everything turned out wrong: I chipped a tooth, and my gums started to constantly bleed, so I got it taken out.”

The piercing trend, although not as prominent, exists at Palo Alto High School as well.

“I just like the way they look,” Paly senior Annie Chládková says.  Chládková has multiple piercings on her ears. “I love putting jewelry on, and with these I just get to use more,” she says.

According to Dimarino, this sort of attitude among teens can be troublesome to adults.

“It is a very common argument between children and parents,” she says. “This may be attributed to the generation gap — it wasn’t the norm 20 years ago, but now, many more teenagers have them [piercings]. There’s a certain stigma attached to piercings: parents don’t want their children perceived as rebels, or part of the emo crowd.”

One such Paly parent does not want her daughter joining in on the body modification trend.

“I had my daughter’s ears pierced when she was six weeks old,” she says. “But I’m not going to let her get any more [piercings].  I just don’t think it’s tasteful, and I think many other adults would agree with me.”

Some, such as Laura, 23, a regular piercing client, believe piercings have therapeutic  benefits which outweigh the social stigma.

“It’s been my experience that many people into modification have come out of abusive childhoods,” she says. “I guess, for myself, I think of my piercings and tattoo as a way of reclaiming or marking my body for myself.”

For others, body modification is a way for them to connect to the spiritual realm.  Just as piercing, tattooing and other forms of painful body modification were common among tribal people, they want the same “religious” experience for themselves.

“Body piercing and tattooing are sacred rituals,”  says Clara, 27, another modification enthusiast at the piercing reunion at the Haight. “Through these mediums, we can customize our bodies and proclaim publicly that we are in control of our destinies. If it didn’t hurt and wasn’t difficult it wouldn’t mean anything. To me a piercing or tattoo is an embodiment of my spirit and soul, an important step in my spiritual quest.”

Regardless of the reasons, many modified people grow to love their body add-ons. Angela says her piercings have become a part of her identity. Although, at the time, she admits she didn’t get the piercings for any specific or intelligent-seeming reason, she accepts them now.

“After a few non-modified months, I see something,” she says, referring to her reasons for getting pierced. “That’s not what they [the piercings] represented. It was a defiant pride, an air of self-confidence and self-love. It can be an extra handicap at times, but it is well worth it. Make yourself into the image you wish was in the mirror.”