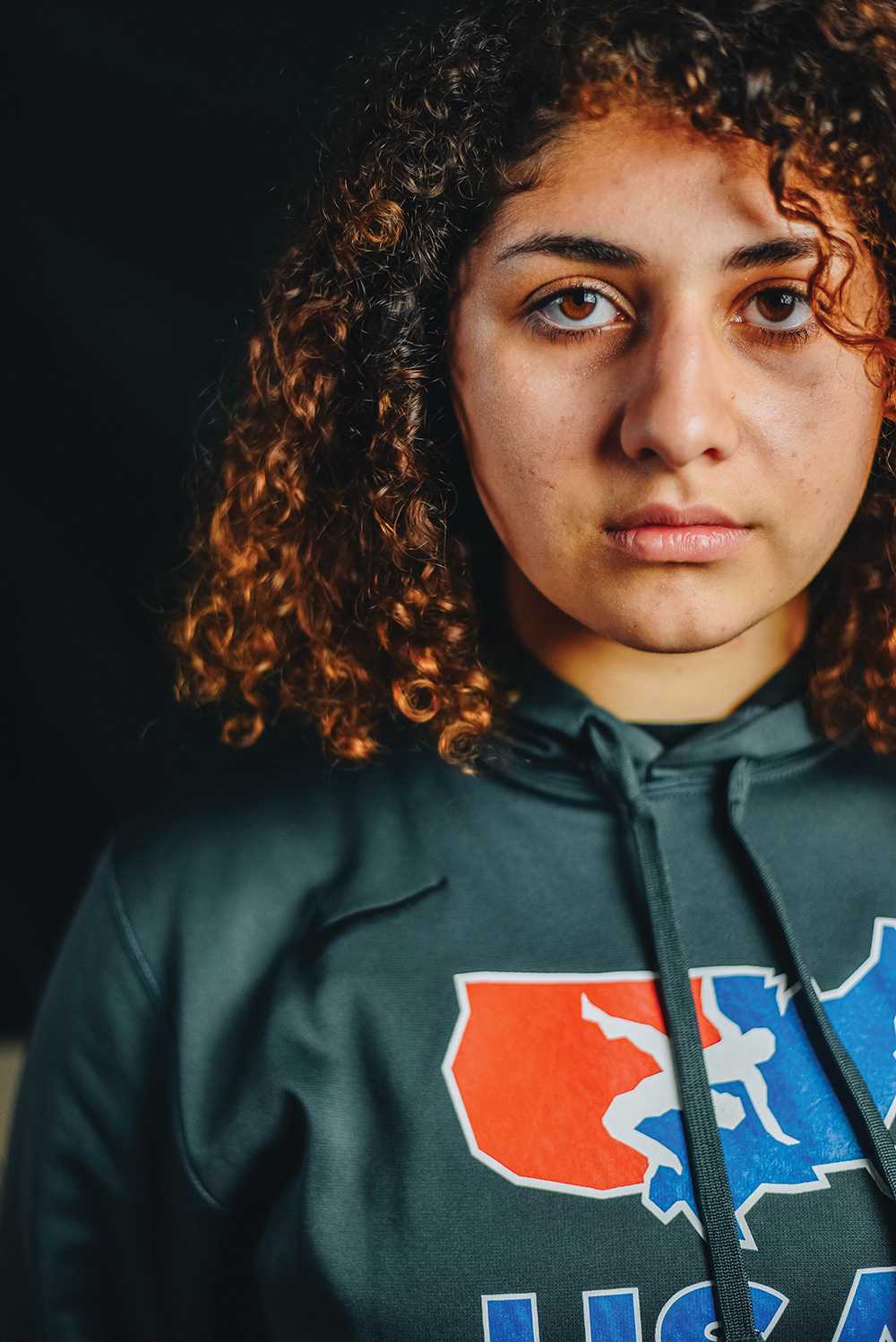 Peace Through Wrestling: Champion comes out on top in battle with dysthymia

Editor’s note: Resources for any person who is feeling depressed, troubled or suicidal are listed at the bottom of this article.

On the day before a wrestling tournament, Sara Aguilar eats two Quaker Chocolate Crunch Rice Cakes and 10 almonds, though she sometimes caves in and eats another two rice cakes with peanut butter in between. She also takes sips of water: at least a bottle and a half, but never over two.

What Aguilar, a Palo Alto High School senior, is going through, is the process of weight-cutting. In addition to brutally restricting her calorie intake to a nearly negligible value while concurrently dehydrating herself dry, she also runs in layers of sticky sweatpants and hoodies with the heater on blast to sweat away any lingering fluids in her body system. Repeating this tried-and-true regimen for a week drops Aguilar at least a full tens digit, or however much she needs to reach 164 pounds. 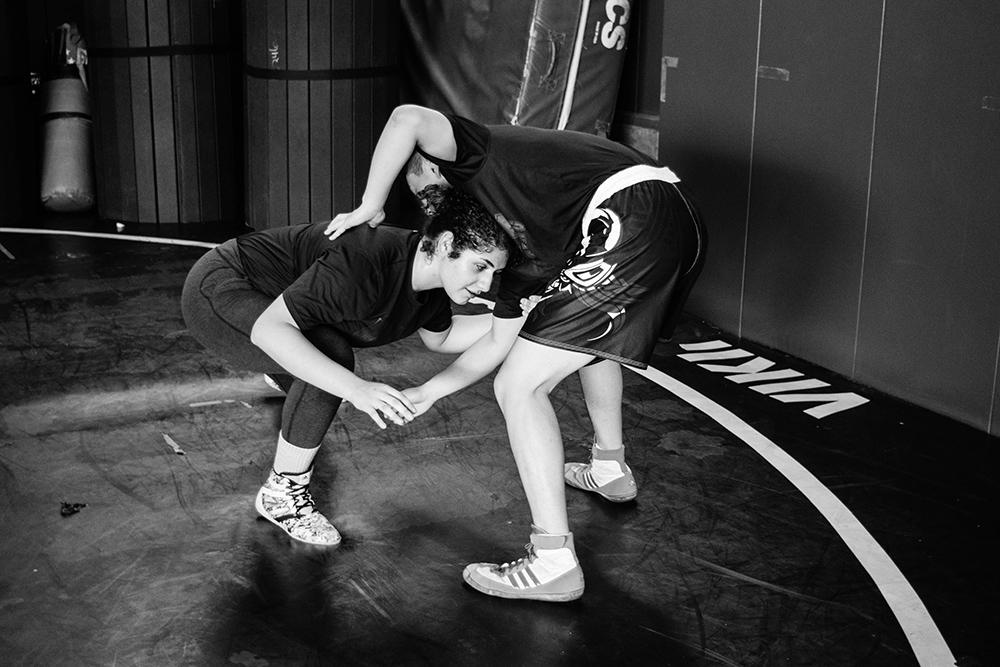 “Some people don’t get it and say it’s nothing,” Aguilar says. “But they don’t get that things accumulate.” Photo by Emma Cockerell.

That’s her weight class: the number on the scale she needs to be under, or else face disqualification. For Aguilar, this process isn’t hard. She’s used to it, being a three-time Central Coast Section medalist, two-time CCS champion, the first-ever female wrestler from Paly to place at states and an All-American, a title she earned after her latest feat of placing second at nationals. She’s even pinned down guys before, and has achieved an extraordinary streak of 19 consecutive wins in a row. Titles and accomplishments are practically synonymous with Aguilar’s name in the wrestling community, and her talent lives up to her reputation.

At competitions, Aguilar holds herself with a rare calm. She chats with her teammates, nibbles on food and finds somewhere silent to walk around while she waits for her name to be called.

Like LeBron James with his chalk dust or Calvin Johnson with his yoga warm-up, Aguilar also has her own pregame ritual. Believing there to be a mental component in every sport, she begins every tournament by first repeating shortened Bible verses she has written down in her wrestling journal.

“I tell myself I am creative, that I have wisdom,” Aguilar says, smiling. John 3:16 is her favorite verse. “I like to open up my lungs and sprint. Just a lot of motion. Then I take a deep breath and, like a dragon, blow everything out. And I’m ready to go.”

As natural as Aguilar’s pro-athlete composure seems, the kind of self-command she possesses hasn’t always come to her so effortlessly. She actually describes feeling a bit off for as long as she could remember.

In elementary school, Aguilar says she didn’t talk to anyone. Both she and her teachers knew there was something wrong with her, she adds, but it wasn’t until middle school that she was referred to a psychiatrist.

In seventh grade, she was diagnosed with dysthymia, a continuous, chronic form of depression. Caused by a chemical imbalance in her brain, Aguilar’s disorder was a source of overwhelming anger, panic attacks and despair. She didn’t want to do anything, she wasn’t functioning and she was failing middle school. 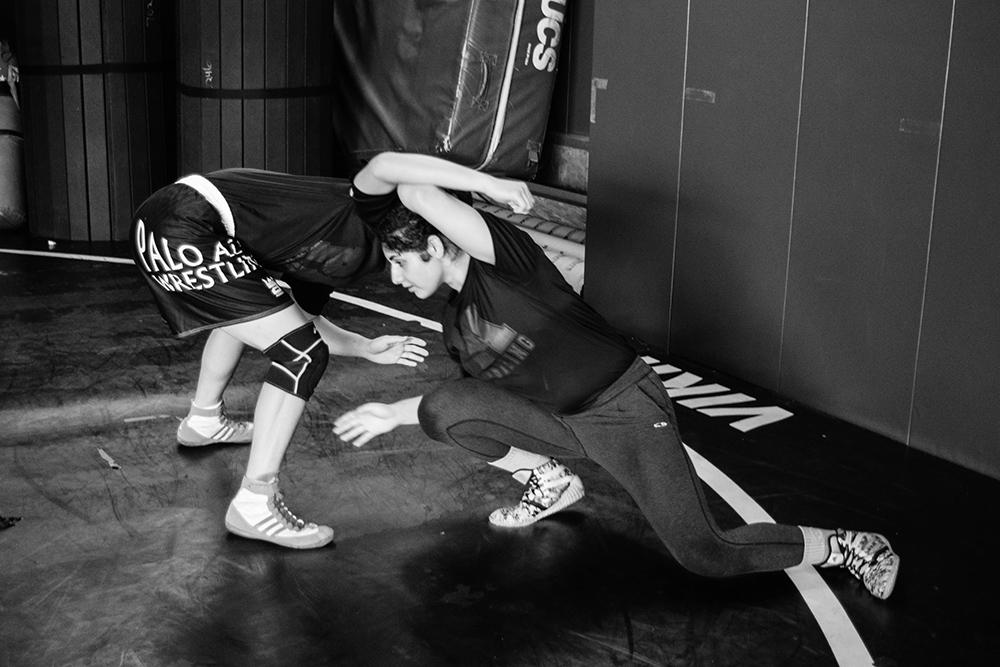 “I was scared of failing,” Aguilar says. “But in wrestling, you fail all the time.” Photo by Emma Cockerell.

“I was just so tired of it. I felt alone,” Aguilar says. Tears well up in her eyes and she blinks them away. “I felt empty. I had a super low self-esteem. I hated myself. I felt like I had nowhere to go. It was just a huge, dark, empty space. Some people don’t get it and say it’s nothing. But they don’t get that things accumulate.”

A month after being diagnosed, Aguilar attempted to take her own life. The next day, an ambulance escorted her to a psychiatric hospital. She stayed there for three of the most traumatic days of her life.

“The little part of me that was still there felt like it was being ripped away when I was [at the hospital],” Aguilar says. “I had no identity or purpose.”

When she went back to class, no one asked her what had happened. Because Aguilar lived in Redwood City while attending school in Palo Alto, her closest friends felt more like distant acquaintances than anything else. There was no one she could talk to, so she didn’t say anything.

Throughout middle school, Aguilar’s P.E. teacher had been hounding her to join the wrestling team after seeing her intensity when competing. Despite having always declined in the past, she felt that her time at the hospital merited some type of change. So when the winter wrestling season came along in her eighth grade, she tried it out for the first time. Aguilar blushingly admits to being completely out of shape and unable to keep up at times, yet she ended up falling in love anyway.

“It was a 180 mindset change,” she says. “It helped me get out of my comfort zone. I was scared of failing. But in wrestling, you fail all the time.”

Now a senior in high school, Aguilar has been wrestling for a total of five years. During the season, she’s on the mat for two hours five to six days a week and lifts weights in the gym on her own time. One of her teammates, sophomore Andrew Wang, even recalls her staying after practice most days to work extensively on her technique.

“She puts extra time into practices and learns how to do really beautifully coordinated moves,” Wang says.

“Without [wrestling], I wouldn’t even go to college,” Aguilar says. Photo by Emma Cockerell.

Off season, Aguilar goes through wrestling motions and visualizes herself in competition before going to bed every night. Her life revolves so entirely around the sport that she even has dreams about wrestling.

Perhaps providing more than just an outlet for her pent-up aggression, wrestling also connected Aguilar with a sense of community. Chosen as the co-captain of the Paly team in her junior year, she learned how to lead and set an example for others. Some wrestlers even view her more as a mentor than simply another teammate.

“She was someone you could really look up to,” Wang says. “I just felt really proud because this was a person that I’ve practiced and sparred with and seeing her excel and go to these great competitions and new heights lifted my spirits.”

Both Wang and Aguilar describe the team a second family, where everyone depends on one another to grow as athletes. As she herself received little support in the past, it was a surprise to Aguilar that she was actually helping her teammates.

“There are people that tell me that they look up to me,” she says. “It’s nice to know I have the ability to inspire others. It feels good.”

Despite feeling like her anger has cooled since her younger days, Aguilar says she still cries sometimes. As her psychiatrist told her, chronic depression isn’t a condition that will ever go away. Aguilar instead describes it as a situational thing, where her sensitivity to the emotions of others causes her to absorb anxiety during stressful times of the year. Worrying over her future and what she could have done better in the past is also a trigger.

“I realize now that I have a super huge support group,” Aguilar says. “But I’m always thinking if I’m really stable enough to be apart of society.”

Aguilar will be attending Menlo College as part of the Class of 2021 and a member of the collegiate wrestling team. The 2020 Olympics are in her horizons, as well as World Championships.

“Without [wrestling], I wouldn’t even go to college,” she says. “It [has] just opened up a lot of pathways and opportunities for me.”

For now, Aguilar is taking it day by day. There are a lot of possibilities for her out there, as well as a lot of titles she’s eyeing, but she’s still trying to manage her emotions before getting too far ahead of herself. Aguilar is looking for solidity, and she knows taking breaks once in awhile is necessary. This, of course, includes treating herself after hard-fought competitions.

“I usually have a burger and a shake. It’s the best thing,” Aguilar says. She laughs and her face lights up. “It’s so good.”

Any person who is feeling depressed, troubled or suicidal can call 1-800-273-8255 to speak with a crisis counselor. If the threat is immediate, call 911.