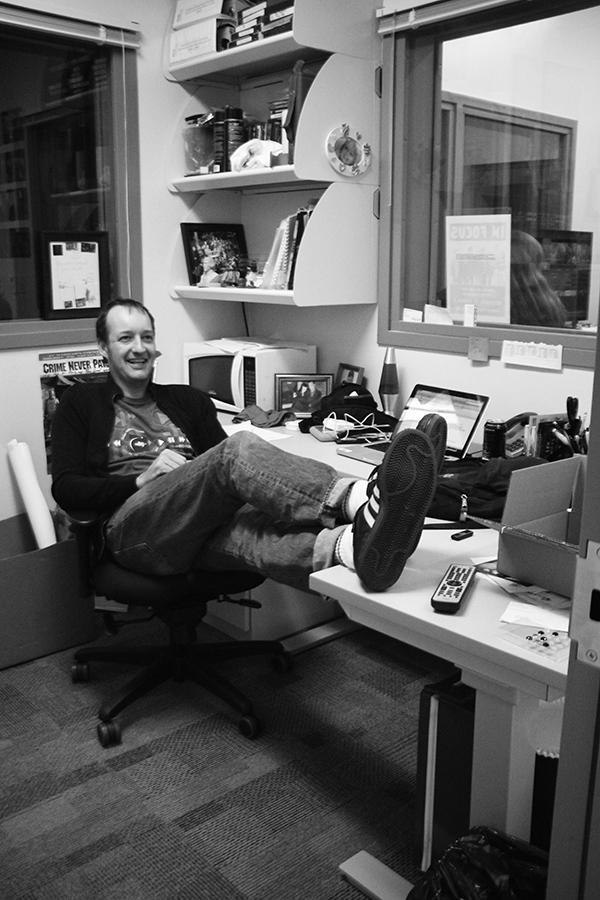 InFocus director Paul Hoeprich relaxes in his room after class

Glossy movie posters, Finnish memorabilia and shiny awards cover the wall, while papers lie messily over the large desk. Paul Hoeprich, the new Viking sports magazine and InFocus broadcast news show adviser, slouches back in his chair with his hands behind his head, feet on the table, a Hansen’s Ginger Ale within easy reach.

Although Hoeprich may be new to Palo Alto High School, he has considerable experience in broadcast journalism and film production. Before he became a teacher at Paly, Hoeprich worked as a professional reporter and cameraman at National Broadcasting Company affiliates, ran his own film company and built up film and journalism programs at several schools across the country.

When given his first camera at the age of seven, Hoeprich knew that he wanted to become a filmmaker. At his high school, he participated in a broadcast journalism program similar to InFocus, and continued to study film at Northern Arizona University. In college he was introduced to professional journalism when he was asked to go with a local NBC news source to get footage and take photos of a train wreck.

“I got a call from a reporter saying, ‘There’s been a train wreck,’” Hoeprich says. “There was a freight train that was hauling brand new Lexus SUVs, and it had like derailed and there were … SUVs all over the mountainside, but they wouldn’t let us in to get footage. … I went trudging through the forest that night and went up this mountain and got a really nice shot of the train derailed with all the SUVs, and that was actually used as the nationwide feed for NBC. … That was the first time I’d seen my footage on other [news] feeds.”

Hoeprich went on to become a camera operator for NBC affiliates in Flagstaff and Phoenix in Arizona. As one of the few employees in the small production center of Flagstaff, Hoeprich received significant journalism experience.

“There were days when I would get into the news car, because we [NBC Flagstaff] couldn’t afford a van,” Hoeprich says. “I would interview people and run the camera, write everything, come back to the station, edit it all together, give it to the production staff, and then work camera and teleprompter for the news show where they would show my story.”

Later, he transferred to the Phoenix NBC station, which covered a much larger area with more viewers.

“I worked there in 2001, which was a pretty rough news year,” Hoeprich says. “They had given me a pager, and I remember when Sept. 11 happened I worked crazy hours like from 3 a.m. to 11 a.m. … I was sleeping and I remember seeing it on the news or whatever, and then the pager just went crazy … so I kind of got thrown in the fire as far as news goes.”

Seeking a life with more stability than his late night shift had to offer, Hoeprich decided to take a job at a charter school.

“I think having a quote-unquote normal life, meaning like a family, a kid, a dog … became important, and working 3 a.m. to 11 a.m. Tuesdays and Thursdays off is not conducive to that,” Hoeprich says. “I found a job teaching history at a charter school. … I really enjoyed it, and I was like, … oh boy, I guess I’ll be a teacher.”

While teaching, he attended University of Phoenix in order to receive a masters in education and soon began teaching film and broadcast journalism at various public schools, including Arcadia High School in Phoenix.

“I taught at Arcadia High School for six years and built the [broadcast journalism] program up from nothing to a nationally recognized program,” Hoeprich says. “It’s what I like to do so I’m excited to do it here [at Paly].”

Teaching also allowed him time to pursue his other passion, filmmaking. Hoeprich, along with his friends, started Catbrain Films, a company that produced and directed short films.

His favorite film that he produced was “The After Vows,” which, although only six minutes long, garnered the most awards and attention of all his films. The film focuses on a married couple after their wedding night when they begin to confess that they kept secrets from each other. According to Hoeprich, the confessions become bigger and bigger until there are mariachi bands marching through the room and undercover CIA agents coming out from under the bed.

“It is just this kind of classic comedic escalation … I like it the most because it’s just cool classic comedy,” Hoeprich says. “It’s two people in a bedroom and it’s just good dialogue and something people can relate to.”

Having lived in Arizona since the age of five, Hoeprich decided he wanted a change of scenery and looked to move. An open teaching job at Paly attracted him to come to Palo Alto.

“It [Paly] had a really college campus feel,” Hoeprich says. “It felt like a free learning environment, and I got that right the minute that I crossed the street from the Town and Country.”

As the adviser for Viking and a first-time adviser for a print publication, there’s a lot for Hoeprich to get used to. 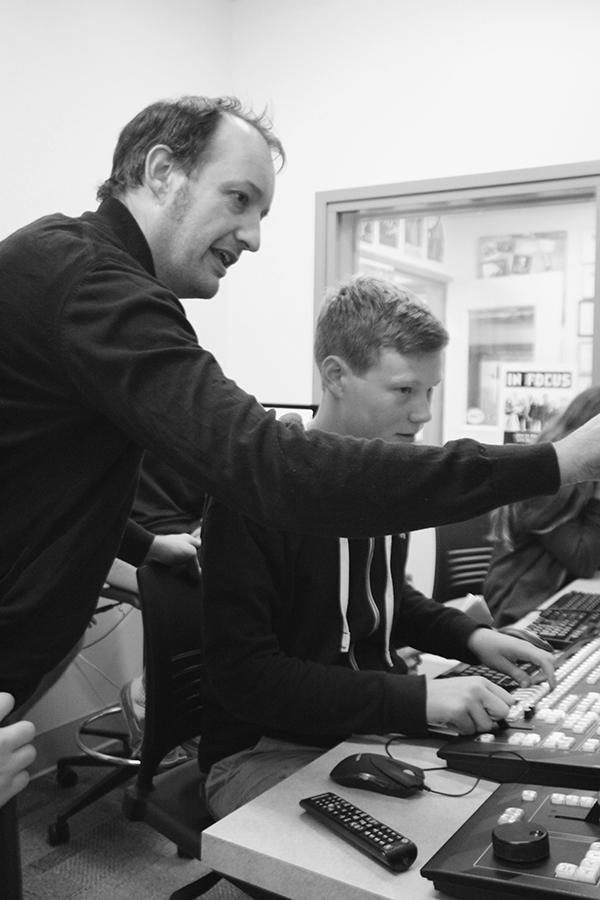 “For Viking, my goals are to learn how a print publication works here [because] I’ve never actually done this before,” Hoeprich says. “They [the staff] have been really quite cool and they are teaching me a lot, which is neat. My goal is to … assist them as much as I can, but they really have it together so I don’t think they’ll need much help from me.”

Hoeprich has taken a more active role with InFocus because broadcast journalism is his area of expertise.

“I want the students to produce everything,” Hoeprich says. “It should be their show, but right now there’s a lot of technical things … and training they need and things like that to get the ball rolling, so I think I have a much more active role now, but I hope to stand back and just let them run the show and just fix things they break.”

According to Griffin Carlson, one of the executive producers of InFocus, Hoeprich works well with the InFocus class.

“I think Mr. Hoeprich is a great new fit for the InFocus classroom because he is very dedicated and he is [replicating] a professional atmosphere for us,” Carlson says. “His motto is that ‘If it works in the industry it will work for us,’ and I think that is great because a lot of people who join the InFocus class are interested in following a career path in broadcast journalism and this will help them see if they’re interested.”

With a new teacher, a new studio and the new Media Arts Center, expectations for InFocus are high.

“Our goals for this year are to form long lasting relationships between InFocus crew members and then we wanted to garner campus-wide viewership of 90 percent,” Hoeprich says. “Our biggest goal is we want to win two national awards this year for the show, of some kind. Awards aren’t everything, winning isn’t everything … but it’s kind of a nice validation that your work is being recognized.”