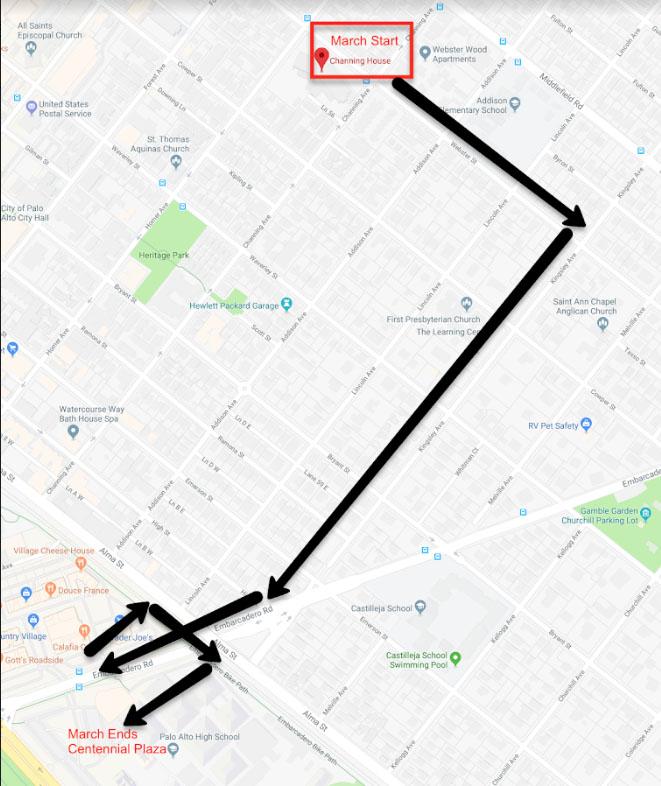 Palo Alto High School will recreate the opening day march that marked the establishment of Paly’s present day campus 100 years ago with choir, band and theatre students performing in the showcase.

On Oct. 7, students, teachers, alumni and community members will begin marching at 1:00 PM in front of Channing House, finishing with student performances at Paly’s Centennial Plaza.

“Choir will be performing several songs, including a song commissioned for us by Christopher Tin, a grammy winning composer and Paly alum,” Paly Choir President Jessica Weiss said. “It will be the first time it has ever been performed, and it’s a really amazing piece.”

In addition to choir, Thespian club, the oldest club on campus, will be performing a sketch written by Tony Kienitz, a parent of Paly alumni.

“What we did was got research and information about the 100 years of Paly theatre,” theatre teacher and director Kathleen Woods said. “We took one play from each decade and each play that we chose is highlighted in the performance.”

The Palo Alto Historical Association, key organizers of the event, decided to model the march after the original December 1918 walk when the entire school, board, city council, mayor and David Starr Jordan marched to the then-new campus.

“The March included a band, and they marched on December 24th because they couldn’t start school in September due to the big 1918 flu pandemic,” Paly librarian and event organizer Rachel Kellerman said. “ I imagine there was a great spirit of celebration to finally be able to open the new high school after the ravages of World War I and the flu pandemic.”

Kellerman hopes that this march will bring the entire Paly community together to honor one century of the school.

“In terms of this march, I’m excited about seeing multiple generations of alumni and the community taking part in a fun celebratory event together,” Kellerman said. “When we dig into the past we build community by finding common ground with those who came before us.”