Palo Alto Repair Cafe: Repairing the community one item at a time 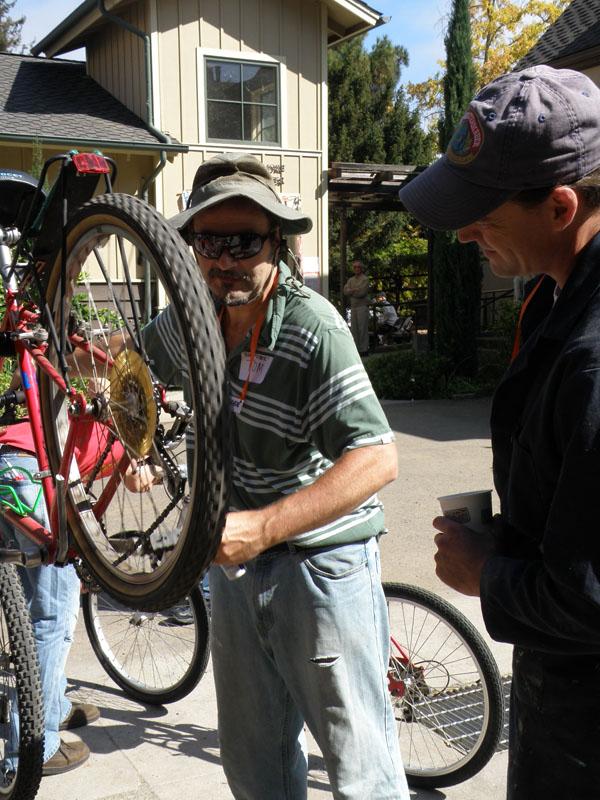 Kabat, bike repairman extraordinaire uses his skills to help out the community by repairing bikes for others.

Concealed in the back of the Palo Alto Museum of American Heritage,  a new non-profit organization advertises its presence with a sign labeled “Repair Café” on the sidewalk in front.

Repair Café is a place of resurrections, a hospital for broken items and a haven for the owners who have no idea how to fix them.

Peter Skinner, the organizer for Repair Café, oversaw the first Repair Café meet on Oct. 14. Regular hours have not yet been officially declared.

“It depends really on demand, on availability of space and on what sort of interest there is in the community for doing this kind of thing,” Skinner says.

The next local Repair Café will open in February of next year.

People carry in broken household items to a registration table where their names, addresses and items are recorded.

Then they join the queue of bewildered yet hopeful visitors.

The concept of Palo Alto’s Repair Café began in May of this year when Skinner read an article on a group in Amsterdam, also called “the Repair Café,” whose main goal was to help people repair basic household items with the aid of volunteers.

“I read this article and I thought; Palo Alto needs one of these,” Skinner says over the roar of a newly-repaired lawn mower. “I looked around and I tried to find something like it. I spent a couple of months putting this organization together, collecting volunteers and finding space.”

Skinner, along with his friends, Bob Wenzlau and John Eaton, started the organization.

A volunteer, Tom Kabat, came in after Repair Café contacted him in a mass email that was sent to locate potential volunteers.

“I decided I would try to come over and see what I could do to help people fix bikes and other things,” Kabat says. “My [specialty] is bicycles. I really enjoy trying to help more people enjoy their bike riding so I like helping keep their bikes running well.”

Similar to Kabat, the volunteers of Repair Café range from everyday people who just want to help the community to experienced handymen like the volunteers from Palo Alto Ace Hardware.

The larger goal of facilitating repairs, according to Skinner, is to encourage individuals to repair their broken items themselves without requiring assistance from anyone else.

“Part of this exercise is getting people comfortable with the notion of tackling that fix-it problem instead of saying, you know, I can’t do that, I don’t know how to start, I’m just going to throw it away and buy something new,” Skinner says.

Jo Ann Arneson, a client who has benefited from Repair Café’s philosophy,  brought in an Asian lamp that had broken four months ago by falling over.
“I didn’t know where to take it, and I don’t have any friends that are handy,” Arneson says.

Another person in need of aid was Vidur Apparao, who brought in a broken laptop bag along with his two young children. He hoped to teach the next generation something about repairing rather than replacing.

“I wanted to expose them to the idea of being able to fix things rather than throw things away. I think kids today especially don’t necessarily see that,” Apparao says. “I really hope that they understand that if things don’t work, they don’t automatically get shoved to the side and thrown away.”

Skinner also hopes that Repair Café will help change a common approach to what he sees as abandoning focus on big universal problems.

“I have this philosophy that we’re in an era where there’s no appetite for big public policies to solve our big social and environmental problems and that the way we have to do it is we have to rely on a lot of local activity,” Skinner says. “This is a small group of people working in a small universe trying to fix a small part of the problem, but if we can do this and succeed, and it grows, we can [then] start nibbling away at [a] part of the problem.”

In addition to keeping appliances out of the landfills, Repair Café also aims to cut down pollution and energy use.

“Repair Café is helping fix things to keep them out of the landfills so we don’t have to buy new things to replace them,” Kabat, the bike volunteer says. “That saves energy and cuts down on greenhouse gas emissions. Especially to the extent where we are fixing nice benign technologies like bicycles and hand tools and things like that are pollution savers.”

In the event that an item cannot be fixed, Repair Café helps the owner figure out the safest way to dispose of their item.

“If somebody has something we can’t fix, we send them to the GreenWaste table and [they’ll] help tell them how best to dispose of it,” Skinner says.

As the day ends and volunteers busily finish their repairs, a bright beacon of light appears at a table. A volunteer steps back and holds out a symbol of Repair Cafe’s mission, Arneson’s fixed lamp, glowing brightly.