Out of house but not home 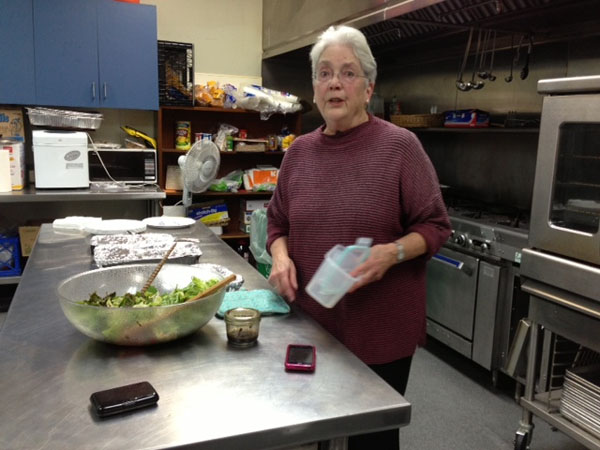 Most places in Palo Alto have closed up shop, but the All Saints Church on Waverley and Hamilton is just opening its doors. A small group of people congregates outside, waiting for the church doors to open.

“How about those Giants?” one man remarks from the semi-darkness.

“Yeah, we really had a great season,” I reply.

He chuckles and sits down on a bench outside the church’s entryway. I continue past him and into the building, which has been converted into the Hotel de Zink homeless shelter for the night.

The scent of roast beef and mashed potatoes warms me as I step inside from the rainy night. Several volunteers set up mattresses on the floor, preparing for the guests who will eat dinner and spend the night.

A woman in a bright pink sweatshirt approaches me and inquires about my presence. We have a pleasant conversation about the weather before I speak with a staff member on duty named Chris Driscoll, who works for InnVision Shelter Network [IVSN], which recently incorporated the Hotel de Zink program in order to maximize the effectiveness of both agendas. 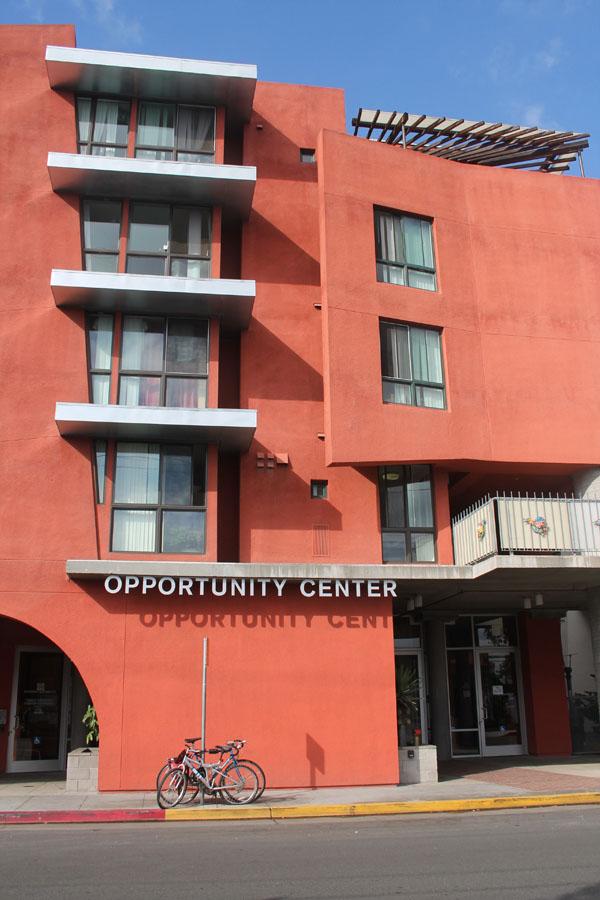 The Opportunity Center, located just a block away from Town & Country, provides a variety of people with regular amenities such as showers and sleeping areas.

The InnVision Shelter Network extends help to homeless and at-risk people across the Bay Area via programs like Hotel de Zink. According to IVSN’s website, the network aims to help homeless families and individuals across Silicon Valley and the San Francisco Peninsula by providing financial and residential security and means of getting back into the working world.

Kelty Spencer, the communications director for the InnVision Shelter Network, explains the purpose of the newly merged organizations in her own words.

“[The mission of] IVSN is to help homeless individuals and families gain permanent housing and become self-sufficient,” Spencer says. “We serve 20,000 clients just in the Bay Area. So we now provide services for homeless and at-risk individuals, in San Mateo County and Santa Clara County.”

According to a report filed last September by the National Alliance to End Homelessness, the unhoused population in the U.S. could increase by nearly 75,000 in just three years. Fortunately, IVSN and Hotel de Zink provide guests with plenty of resources to get back on their feet.

Cynthia, one such guest, relates her positive experiences while staying at the shelter. She has been a lodger at Hotel de Zink for the past three weeks and is grateful for the food and quarters she has received.

“It’s a roof over my head,” Cynthia, whose last name has been withheld to protect her identity, says. “It takes a lot of the stress off.” Cynthia has been homeless since April, after the death of her husband left her grief-stricken and with nowhere to go.

When the pain of her husband’s recent death became unbearable, she began drinking, which led her to end her search for an apartment and resort to life on the street.

“I started drinking, which is not a good thing,” Cynthia says. “No, that’s never a good thing.”

Cynthia is disabled and, after a fall she took a few months ago, is now blind in one eye as well. Finding work has proven difficult, even with the help of her case manager, whom she meets with every week at the Opportunity Center, a salmon-colored building that provides amenities and counseling services to homeless Palo Altans.

Together, Cynthia and her case manager work to find Cynthia a stable source of income, and she has recently resumed her search for an apartment. In spite of her difficult circumstances, Cynthia remains cheerful. Over the course of our conversation, she laughs at her own self-deprecating remarks and even manages to work up a smile when talking about some of the hardest times in her life.

In her temporary home at the All Saints Church, Cynthia and her fellow guests come into the church at 9 p.m. sharp for a meal and place to sleep.

“We open up, they get a good meal [and] they sleep. [At] 6 a.m. we wake up, we do chores, we make sure everything is clean,” Driscoll says. “They make themselves a meal for the day … we always try to keep the refrigerator stocked so they can pack a bag for the day.”

Another organization collaborating with IVSN is the Downtown Streets Team [DST], which works to combat homelessness by restoring confidence in individuals and giving them work cleaning up the streets of cities around the Bay Area.

Jeff Talley, a formerly homeless man who has been in permanent housing since 2008, shares the story of his past and how he became involved with DST.

Prior to joining DST, Talley drifted in and out of homelessness for 10 years. Holding a long-term job proved challenging because of his undiagnosed bipolar disorder.

“I didn’t know why I had [a] problem,” Talley says. “Joining the Streets Team was a big improvement; it helped with psychiatrists and psychologists.”

He explains that the high success rate of DST can be attributed not only to its help with food and shelter, but also because it creates a sense of accountability and greater self-assurance amongst members. After being on the streets for a while, “it’s hard to become responsible for your actions,” Talley says.

“I started losing hope. Once you get on the streets, it’s hard to get off,” Talley says. “I fell down a couple times, [but DST] didn’t give up on me.”

Talley praises organizations in Palo Alto that tackle homelessness. His friends in other cities receive little to no support in their fights against homelessness.

“Other places don’t care,” Talley says. “Palo Alto takes it on with a reality.”

And DST does not help unconditionally  — the program encourages all of its participants to put in their fair share of effort.

“You have to help yourself, but they do push you in that direction, and that’s extremely important,” Talley says.

It’s not all hard work and desperation, though, especially for those involved in IVSN.

“I haven’t had any bad nights,” one woman says of Hotel de Zink. “And since I’m homeless, I have more time to enjoy the little things … like sunrises and sunsets.”

For those who want to help out, Spencer urges teen involvement with the homeless community. Indeed, with the ever-increasing population of those being successfully served by IVSN and Hotel de Zink, the programs would love any of the help they can get.

“I know some high schools can kind of find working with the homeless population kind of intimidating … but it is a really rewarding experience,” Spencer says. “There’s so much they can do, so they really shouldn’t be intimidated at all. If they have any interest in volunteering, we can find a way to incorporate them.”