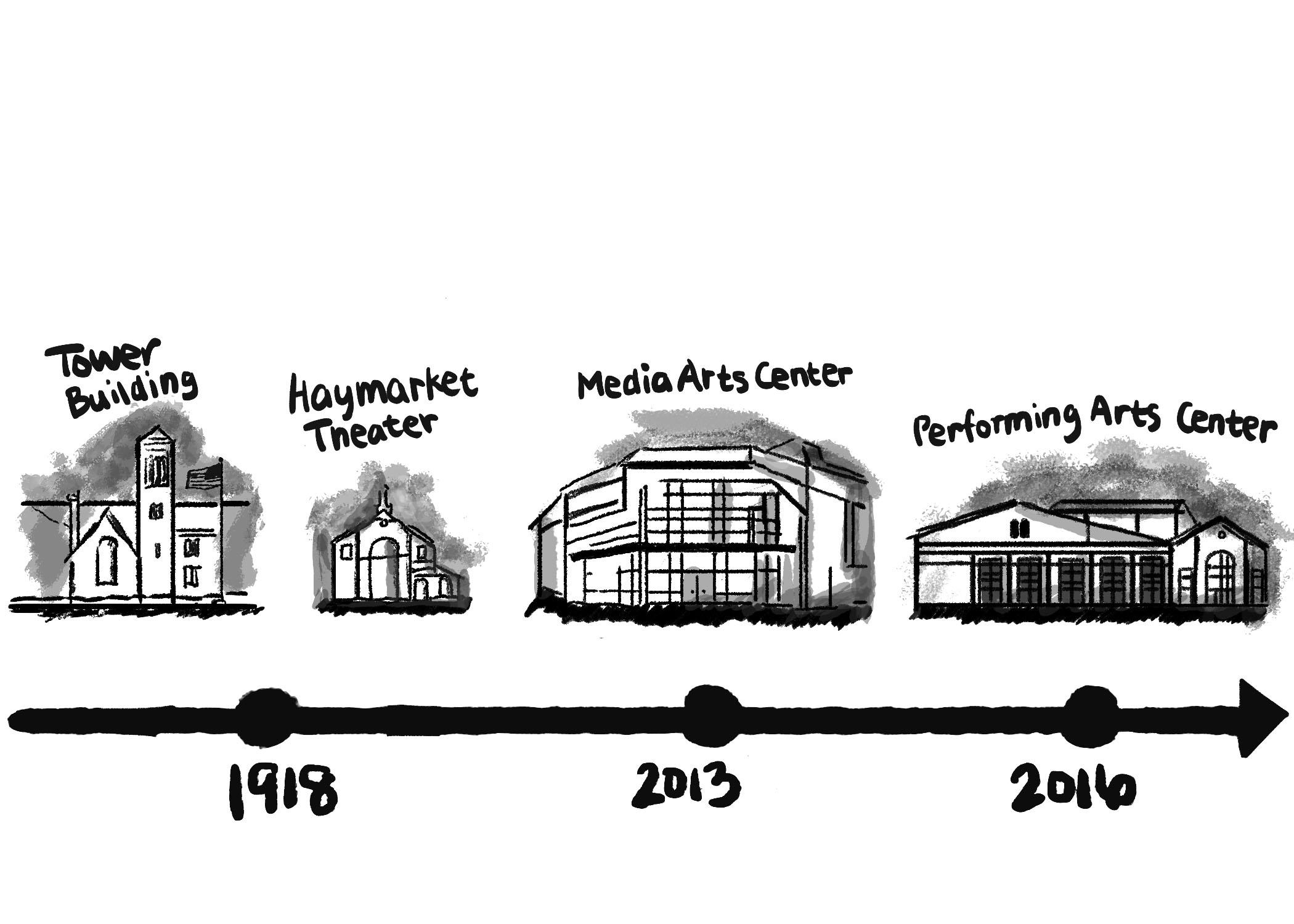 Our predictions: Paly in 100 years

In 100 years Palo Alto High School could be underwater, but at least the debate over weighted GPAs will finally be settled. No one knows any of this for sure, but at the start of Paly campus’s centennial year, we took a look at how four its aspects have changed in the past century and what we think, or hope, will change in the next century.

In just the past five years, Paly built upon the foundation of a long history of architecture by adding a new media arts center, gym and theater, soon to be joined by a new library. Paly began rebuilding campus facilities in 1968, when the school replaced most of the original buildings to meet safety standards. The only exceptions were the Tower Building and the Haymarket Theater, which were merely renovated. But in 100 years, will any of these buildings be left? Paly may need to significantly adapt its campus facilities due to the effects of climate change, including rising ocean levels and extreme heat, that could consume the Bay Area. For now, though, we can look forward a new library next spring.

Paly is no stranger to gender and racial inequality. In the aftermath of the 2017 Title IX misconduct case, district officials promised to continue work on problems like sexual assault and the achievement gap. Large scale movements, like Black Lives Matter and #Metoo, have also brought attention to these issues. While the current White House has not supported immigration rights and women’s health, there have been improvements locally and nationally since 1918, with significant steps towards equal rights for women, African Americans and immigrants. These problems will likely still exist in 100 years, but we hope that there will continue to be local progress. For example, creating immediate consequences for any sexual assault at Paly and instituting specific policies that work towards eliminating the achievement gap.

Since the tech revolution in the ’90s, Palo Alto’s high schools have not only developed a STEM focus and academic strength but also garnered criticism for their highly stressful environments. In recent years, the Paly administration responded to students’ mental health concerns with the Wellness Center and multiple mandatory assemblies on student safety and well-being throughout the school year. But will these measures help long-term to address problems like project and test stacking, the excessive time required for homework, or the pressures to take on a more difficult course load? While we applaud the community’s focus on the mental well-being of students to maintain a safe school environment, we hope that in the next century it tackles these problems with a more in-depth look at Paly’s education system.

Last spring, many Palo Alto citizens backed the idea of a computer science requirement at Paly. While this would continue Paly’s emphasis on STEM subjects, will the skills we learn from this elective even be useful for students in the 20 years, never mind the next 100 years? Cursive, once considered a required skill, is becoming obsolete with the development of computers. In the coming years, new technology such as voice command and augmented reality will continue to gain popularity, and a century from now, we could even be using a brain interface — technology that seems wildly unrealistic to us now but may just become a reality. While we might not be right about exactly what type of future advancements will arise, we will likely see further transformations in how we learn.

Questions remain: will the Paly meme Facebook group exist in 100 years? What will Verde’s 120th volume be about? Will we ever learn how to use tutorial? As we reflect on the past 100 years, it is important to form goals for the future so that Paly’s system can  continue to set the high-water mark in education for the next century.