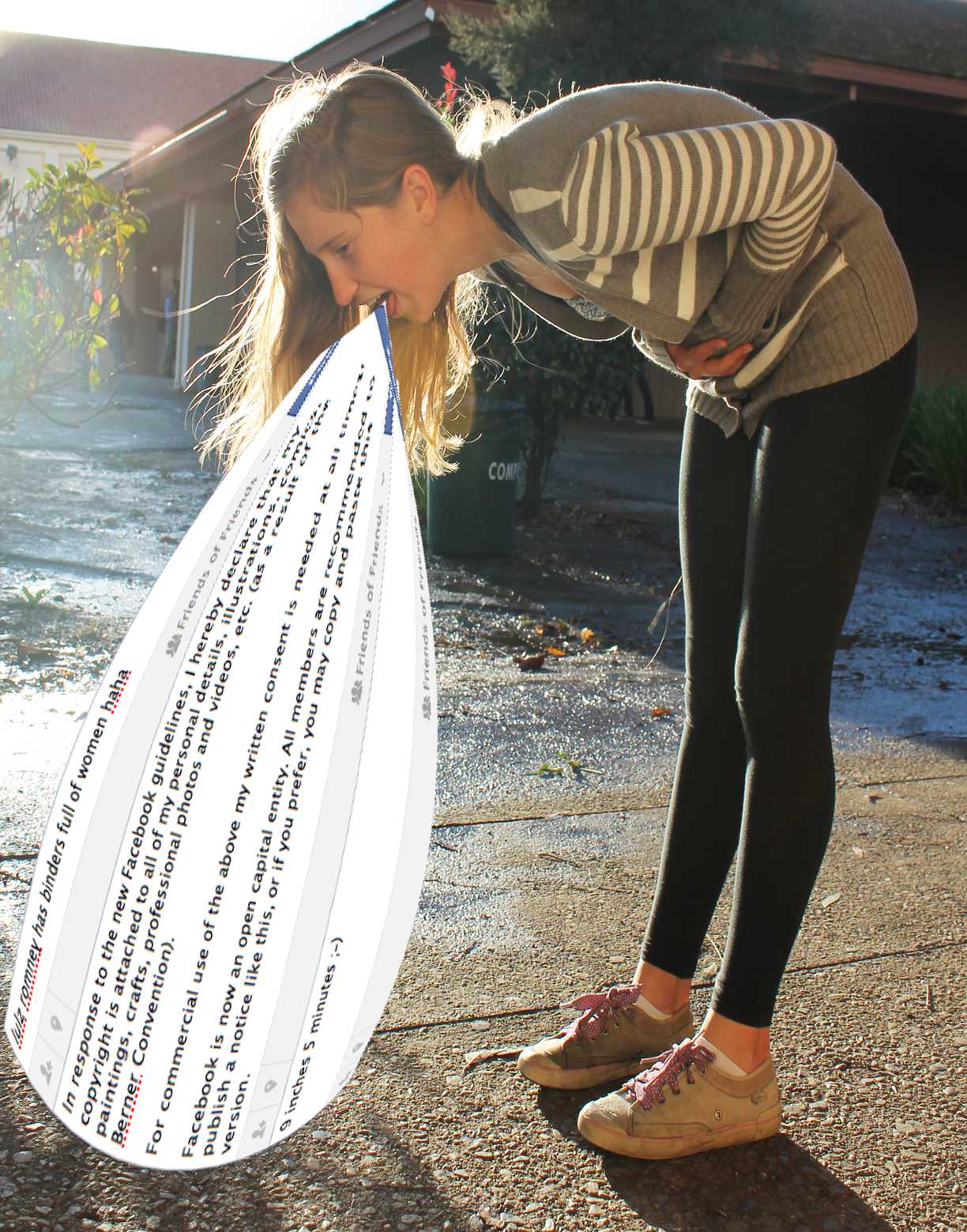 TOO MUCH INFORMATION: Copycat Facebook statuses, like the one that warns against copyright theft, spawn misinformation and confusion. [Photo by Charu Srivastava]

If I’m to believe the information that shows up on my news feed, Facebook is only two seconds away from superimposing its logo on top of the unfortunate profile picture that I had back in the day when I still thought I was a ninja. The next thing I know, the whole thing will be splashed all over a massive billboard for the whole world to see. I’m powerless to stop this, because I failed to repost the following declaration: “In response to the new Facebook guidelines, I hereby declare that my copyright is attached to all of my personal details,” which guarantees Facebook won’t try to steal my face.

This, of course, is a fraudulent claim. But that hasn’t stopped it from conquering my news feed at various intervals as panicked users join their “friends” in spreading the spurious assertion.

It doesn’t take much to rile a Facebook user somewhere, and if the cause seems interesting enough, everyone else jumps on the bandwagon, posting as quickly as possible to do their part, even if it means sharing repetitive or inaccurate information. When President Obama was re-elected, there were victory posts galore. And the “binders full of women” comments that resulted after the third presidential debate far outnumbered the actual number of women contained in said binders.

Copycat oversharing isn’t restricted to news events, either. When users in Greece and Cyprus decided two years ago to change their profile pictures to images of their favorite cartoons as a way to protest violence against children, thousands of others from all over the world joined in solidarity.

Another meme advocating breast cancer awareness asked female users to change their statuses to things like the location of their purse or their shoe size, followed by the length of time it took them to do their hair. Responses like “I like it in the backseat of your mom’s car” or “10 inches, 20 minutes” were intended to arouse curiosity and stimulate conversation that might  eventually lead to a greater awareness of breast cancer.

While I sympathize with these causes, I have yet to see how hitting a few keys and pressing send will end child violence or cure breast cancer: the implication that a single status has that much power rejects reality. And anyone re-posting the latest news generally offers little in the way of substance. Rarely do I see an insightful spin on current events or even witty repartee. Instead of offering original content, posters often paraphrase the headlines or offer select quotes, taking information out of context and depriving fellow users of the full story.

The breast cancer meme, by attempting to portray breast cancer as “sexy” with its innuendo-laced statuses, only misleads and offends readers. According to breast cancer survivor Donna Trussell in her October 2012 Washington Post article, such a scary disease doesn’t need a “renovation.” If anything, breast cancer and its 39,520 deaths per year should be taken more seriously. In addition, suggesting that a Facebook status change equals a successful blow against breast cancer cannot be defined as anything but deceptive.

And information about presidential elections or other major events can have an equally muddling effect because news is so often cherrypicked for lines like “You didn’t build that,” which are clearly designed to misdirect the audience. The Romney gaffe about his “binders full of women,” when taken out of context, paints the former governor as a misogynist, a characterization that goes one step too far.

Readers, however, don’t know this. They just read a Facebook status about “lolz Romney’s binders” and start to jump to conclusions, creating a spiralling snowball of assumptions. It’s like playing a massive game of Telephone, except that instead of whispering  nonsense phrases back and forth, we’re slicing and dicing important discussions about our government’s future into  meaningless segments for a little bit of attention on Facebook.

So the next time a sea of identical posts starts to flood your news feed, resist the urge to copy-paste and hit “publish.” You don’t need to surrender your status for a few extra likes. Read the actual news instead, form a political action committee, fly to Daraya to help aid the Syrian rebels, whatever. Just don’t be the next person who tries to convince me that Facebook wants to copyright my face.