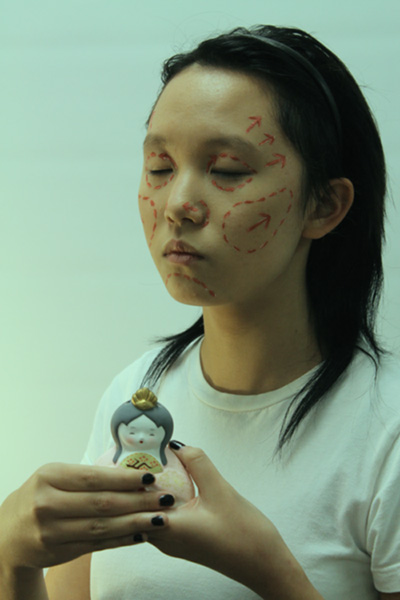 Double eyelid surgery is the most popular surgery among Asian Americans, according to a 2012 report by ABC News. Photo by Charu Srivastava

Does the painful monotony of your palpebral dermis make you squirm? Does the siren call of the crease beckon to you day and night, mocking you? Haunting you? Simply put, do you hate your smooth, fold-less eyelid? Well, hate no more. All you have to do is follow these steps: First, remove a section of your eyelid and trim your orbicularis muscle. After that, carve out your orbital septum. If you’re feeling particularly fancy, you can also snip off just a smidgen of your orbital fat. Finally, suture the skin to the levator aponeurosis, tie off the sutures, and ta- da, you’re all done! You should be up and ready to see in a matter of hours. Just don’t forget your other eye.

Double-eyelid surgery, otherwise known as Asian blepharoplasty, is the no. 1 cosmetic surgery in Asia, according to a 2012 report by ABC News. It’s so popular, in fact, that in South Korea there are entire blocks devoted to the plastic surgeons who are paid to create a crease in monolids (eyelids that were born without a natural fold) that make eyes bigger and rounder. This trend has spread to the United States, becoming the most popular ethnicity-specific surgical procedure among Asian Americans according to the American Society of Plastic Surgeons.

According to a 2001 Salon magazine article, the trend first took off in the 1970s. Back then, the artificial crease was made very high up on the lid, creating an unnatural, alien-like appearance that probably was not out of place in the Disco Era. Then, as the times calmed down and became much more au naturel, the crease slowly descended until it became the subtle fold it is today.

According to Bay Area plastic surgeon Chase Lay, the surgery ranges from from $1,500 to $4,000, depending on the venue and procedure. For those who can’t afford the surgery, there’s always eye putty (a fast-drying serum that sticks the skin together to create a temporary, artificial fold) or natural conditioning (a painless process by which Asians use toothpicks or other implements to train their eyelids to form the desired crease).

The U.S. Census of 2010 counted 17.3 million Asian-Americans living in the United States. 50 percent of them were born with a monolid, or an eyelid without a crease, according to PlasticSurgery.com, but this number is dwindling as more and more Asians opt for a one-hour-long surgery that helps them conform to a strict standard of beauty.

Victoria Kyone, a Palo Alto High School junior, plans to get the surgery as soon as she turns 18.

“Everyone wants bigger eyes,” Kyone says. “They just look a lot better. People are constantly telling me how small my eyes are and it gets annoying.”

In Asia, the pressure to get the surgery is even bigger. Senior Julia Lee says Asians are constantly bombarded with the message that a double eyelid is prettier, more youthful, or even necessary for success.

“Just watching Korean dramas and staying close to the Korean pop culture have given me plenty of messages that double eyelids are more attractive than single eyelids,” Lee says. “Everyone makes a big deal out of big eyes and all the actresses in Korea must have double eyelids to pass in terms of their looks.”

Most Asian celebrities have big, double-lidded eyes, and those who don’t are often hard pressed for fame. Woo Eun Mi, a contestant on Korean-Pop competition “Superstar K2” (similar to “American Idol”), was cut for having monolids and a “friendly” (translation: plain) face. Later, after she debuted with her album “Please,” she went through the double-eyelid surgery, purportedly for “a change in my [her] looks and abilities.”

And it isn’t just the media. Peers and parents also pressure Asians into getting the surgery.

“[My mom] got hers done when she was a teenager,” junior Ellen Song says. “Her mom took her to an unlicensed doctor and it was done pretty quickly. She lived in Korea and everyone was getting it. If I decide to get the surgery, she’ll help me make it happen.”

Even the parents who don’t pressure their children into getting surgery readily accept it as a possibility.

“My parents would never pressure me into getting surgery for my looks, but they are also fine with getting something as small and quick as double-eyelid surgery,” Lee says. “I don’t need the surgery but I don’t have prominent double eyelids either, so my grandmother used to tell me not to worry about my eyes because I can get a quick surgery when I’m older.”

Some like Kyone, in fact, don’t consider the procedure “plastic surgery” in the sense that a nose job or a face lift would be.

“I don’t think it’s okay to get intense surgeries like shaving down your jaw bone or a nose job, where you actually have to alter bone and cartilege structure,” Kyone says. “But the eyelid surgery is okay. It’s just putting in a stich, that’s it!”

Roy Hong, a plastic surgeon at the Palo Alto Medical Foundation, spent a year in Korea after medical school but has worked mainly in the U.S. He says the widespread acceptance of eyelid surgery in the Asian community isn’t any different from our culture’s acceptance of other plastic surgeries.

“In Western culture, it is just as common to have surgeries such as breast augmentation,” Hong says.

According to Hong, plastic surgery is becoming a status symbol everywhere, but particularly in Asia.

In fact, plastic surgery in general is so popular that in both Asia and America, patients can be as young as high school students, with their parents gladly playing the dues.

“In Korea, [most] patients are in college,” Hong says. “[But there are] even high school students whose parents buy the surgery. In my New York training, I saw the same trend with nose jobs.”

Not all Asians agree with the pressure to get the eyelid surgery.

“It sounds painful and expensive, and what do I get out of it?,” senior Christina Chen says. “Not a lot. The cost-benefit analysis just doesn’t add up in favor of it.”

The controversy doesn’t stop there. A common misconception is that Asians get the eyelid surgery to look more Caucasian.

“In a world where Western culture dominates, in which even people in Asian countries look up to the Western style of living, double eyelids are seen as a source of beauty,” Chen says. “That’s kind of ridiculous, I think.”

Carrie Chang, a critic of the eyelid surgery, even founded anow defunct magazine called Monolid as protest against what she says is a racist surgery.

“The surgery is trying to get rid of something that is so distinctly ethnic,” Chang says in an interview with Salon. “They’re not trying to wipe out a race but a racial characteristic. Asians are becoming pro-assimilation and monolid is a buzzword for yellow power and not being ashamed of it.”

According to Hong, however, most Asians now opt for a low, subtle crease to look more like other Asians and consider the higher, “Caucasian” crease of earlier decades to be ugly.

“I think 20 years ago eyelid surgery among other surgeries was used to try to Westernize,” Hong says. “Asia or Korea was a third world country. Everything America was cool.”

But Hong says that now, the eyelid surgery coexists with the monolid as a symbol of Asian pride.

“The Asian culture has a tendency to always want to exceed in everything, and now that includes beauty,” he says. “I don’t think Asian people want to look Western anymore. They have their own idea of beauty and are not afraid to strive for it.