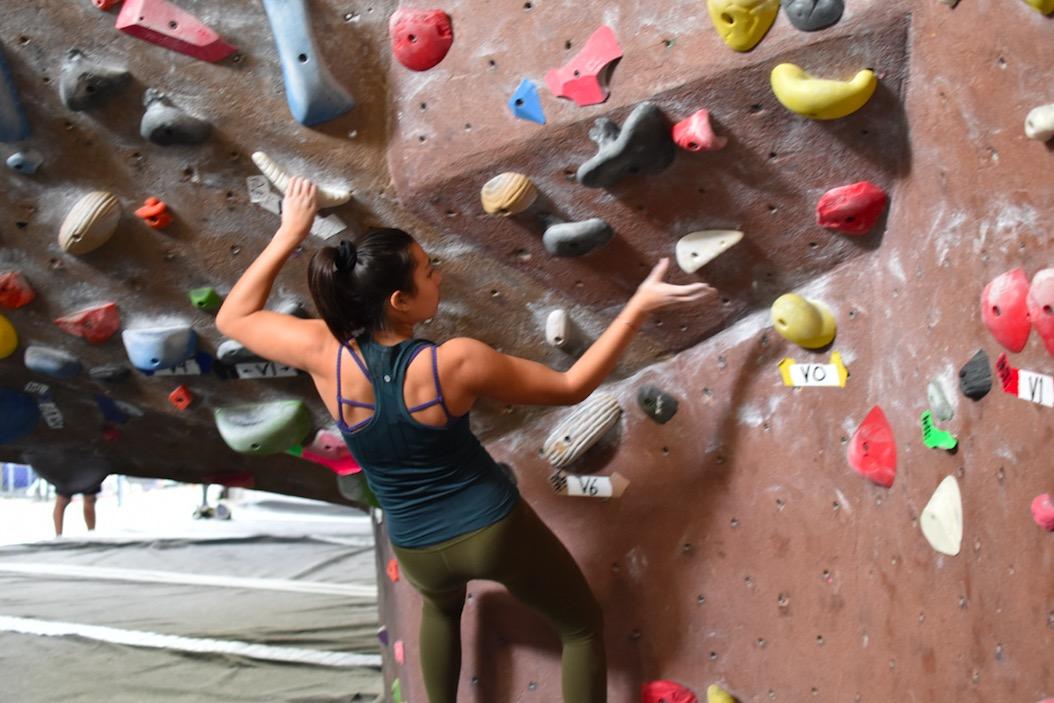 On Top Of the World: A Senior’s Rock Climbing Journey

Two years ago, Palo Alto High School senior Maddie Dong was walking across Embarcadero Road on her way back to school. Then, a crash. Everything went black.

A car running a red light left Dong lying on the ground with 12 broken bones, a torn ACL and bleeding in her brain. After five days of hospitalization and six months of physical rehabilitation, Dong returned to her lifelong passion: rock climbing.

Dong’s rock climbing journey began during the summer between fifth and sixth grade, when she was 11 years old.

“My mom signed me up with my friend to do a camp at Planet Granite, which is an indoor climbing gym in Sunnyvale,” Dong says.

The coaches were immediately impressed with her talent, and offered her a spot on the climbing team. “It was so baffling to me because I didn’t know there was a team in the first place,” Dong says with a lighthearted laugh.

At the time, Dong felt burnt out from years of competitive swimming, so she felt that switching to climbing was exactly what she needed.

The art of climbing

Dong’s passion for climbing resides within the sport’s blend of creativity and athleticism.

“Each climb is kind of like a puzzle, and each person can solve it but in a different way,” Dong says.

“Each climb is kind of like a puzzle, and each person can solve it but in a different way.”

Apart from her practices at the gym, Dong also enjoys climbing outdoors. During winter break, she spent a week climbing in Bishop, California, and has ambitious goals of scaling iconic bouldering destinations.

“One of my friends and I really want to go to the Rocklands in South Africa,” Dong says. “It’s a famous national park with really good bouldering, so we’ve always really wanted to go there.”

“After [the crash], it was really hard for me to join the team again because my body was just not ready for intense workouts,” Dong says. “I didn’t climb for five or so months, and that was really hard as an athlete to not do what you love and what you’ve always done.”

With the accident forcing Dong to take time away from climbing, she learned more about who she is as a person without rock climbing.

“I felt lost and I did have a feeling of loss of identity,” Dong says. “After my accident I was able to come to terms with who I was as a person without it. Climbing is still one of the biggest parts of my life, but now I know I have other aspects of myself. I learned who I was without climbing.”c

Still, Dong came back to climbing with a shiningly positive outlook, according to former teammate Sami Linden, a junior at Los Gatos High School.

“Maddie is super supportive, she is always really psyched to encourage everyone,” Linden says. “She’s great to climb with and really makes a good atmosphere.”

Just last month, Dong started helping out at Planet Granite as the first female coach of the advanced team, where she mentors climbers ages 11 to 16.

“Being a coach is so fun,” Dong says, smiling. “It’s almost like I’m living through these kids vicariously, and I love making them feel proud of themselves and watching them have fun doing something that I love too.”

Dong describes the experience of leading a team as surreal.

“The team is 70 percent girls who need a female leader to look up to,” Dong says. “I can now be that example for these younger girls, and I think that is so thrilling.”

Dong also founded a rock climbing group at Palo Alto High School, and while it is not an official club, she welcomes students to climb and overcome their fears.