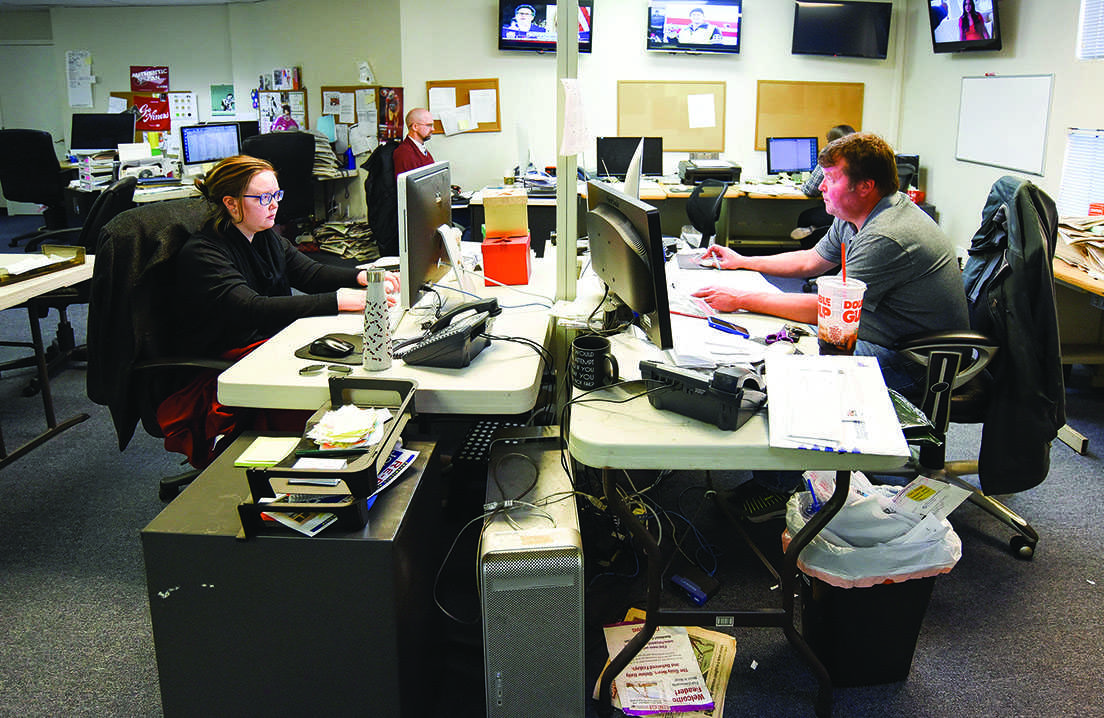 Obsolete or on the Rise? The Future of Print Journalism in the Bay

The ice cubes in a jumbo cup of soda have all melted. Police dispatch scanners accompany television broadcasts, squeaking out a static-filled report once in awhile, informing the Palo Alto Daily Post staff of what move law enforcement might make next. All the while, Dave Price, co-founder and owner of the Palo Alto Daily Post, holds court in his swivel chair, assessing which events will create the biggest stories of the day with the help of his co-workers.

For the Post, print business is booming, as evidenced by Price’s statement that the papers are consistently grabbed out of the box and the publications’ advertisers are highly satisfied, despite the technocentric atmosphere of the town.

“This is the most wired town in the world,” Price says. “You go into coffee shops, yet you see people reading a printed newspaper. That’s not supposed to be happening.”

In contrast, Jocelyn Dong, the editor of the Palo Alto Weekly, says that the long-term future of daily or weekly print journalism is uncertain. The Weekly’s print readership has declined from around 40,000 to less than 34,000 in the past 15 years, according to Dong. However, online viewership is a different story, having increased over 200 percent between 2007 and 2016, according to Bill Johnson, the founder and CEO of Embarcadero Media, which owns the Weekly, in addition to other local publications.

“Readers’ habits have changed substantially,” Dong says. “They say people’s attention spans are shorter than [a] goldfish[‘s] now because we’re getting used to instant feedback with all the games and products that we use.”

Based on the Weekly’s statistics, the model of media consumption is undoubtedly changing. In an increasingly digitized society, inaccurate reporting has made its mark on the online sphere, creating the “fake news” phenomenon discussed on page 22. Print journalism now plays an increasingly important role in guaranteeing the accuracy of the public’s information, according to Price.

“One of the realities of print journalism is that we communicate things to people they don’t want to hear,” Price says. “If you’re only writing happy stuff that makes people smile, you’re not doing your job. You have to print what really is going on and tell the truth.”

In response to readers’ changing demands and the riskiness of limiting themselves to print, the Weekly launched a new digital platform at the beginning of March called the Six Fifty, which is geared toward producing lifestyle content that appeals to younger audiences. Nick Bastone, the editor of the Six Fifty, has a view of print journalism that differs from that of Price.

“I think they [print newspapers] will probably disappear,” Bastone says. “There’s no value to saving a newspaper; it becomes a hassle. It might take some time, but as the older generation fades, the affinity for holding a physical newspaper might go away.”

Two local publications have chosen drastically different directions, with one staying faithful to print and another shifting to the Internet. Will one approach eventually win out over time, or will each publication carve out its own niche?

Print Journalism is Here to Stay

After delivering his previous point about the irony of the pervasiveness of print publications in Silicon Valley, Price laughs heartily while sitting in the only conference room the company has. Despite their humble headquarters, the Post is one of Palo Alto’s most-read and financially successful newspapers, according to Price.

“This is a profitable business,” Price says. “We’ve had growth every year and we haven’t seen any decline in sales. I can remember 10, 15 years ago people said ‘You’ll be a laughing-stock in the newspaper business for not being online.’ Print’s going to be around for a long time, based on the fact that our papers are grabbed out of the boxes every day. ”

Despite being based in the heart of the world’s technology industry, surrounded by cutting edge innovation, Price has decided to keep his business unplugged, and the decision has paid off. Although many of his competitors have switched from print to digital platforms, he never felt the need to, despite the external pressure. He says he never found it a profitable process and watched companies who made the transition fail before his eyes.

“The big newspapers have cut their throats because they’ve taught everyone to go online if you want to read the Chronicle,” Price says. “You don’t go buy a copy or subscribe to it anymore, and they hardly get any money for that [encouraging readers to go online]. It’s hard to see the future for media companies who have done that.” 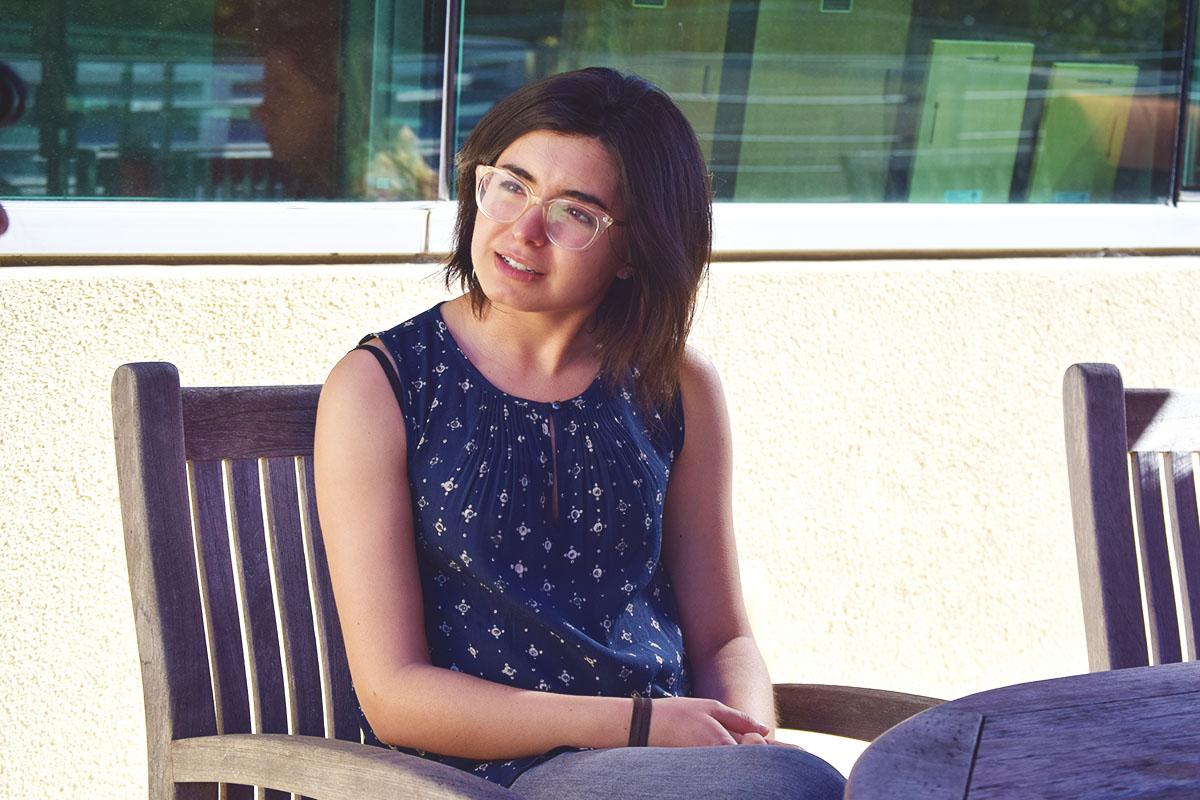 Anna Medina, an editorial assistant at the Weekly, suggests a new approach to media outside the Weekly’s newsroom. She discusses the importance of print news in response to today’s politics and echo-chamber epidemic. “I think that it’s good that … journalism is being forced to decide how to move forward,” Medina says. Photo by Frances Zhuang.

Transition to the World Wide Web

In a new market, publications rethink their product in order to remain profitable and ensure solid, local news coverage. Changes ranging from the financial challenges posed by digitization to the changes in readers’ demands all pose challenges to editors.

“The rise of things like online advertising takes away things that newspapers used to be supported by, so we’re scrambling to figure out what the model of journalism is now,” Dong says.

The Weekly has been online since 1994; however, the publication has had to adapt drastically in response to changes in consumers’ demands.

According to Dong, the apparent recent shortening of people’s attention spans has had recent consequences especially in regard to the echo-chamber phenomenon.

While print journalism may not abolish echo chambers, Dong and Anna Medina, the Editorial Assistant at the Weekly, agree that it can at least mitigate the problem that occurs online.

“Being able to pick up your Kindle is different than curling up with a newspaper,” Dong says. “Again with the echo chamber, you’ll at least see articles that you disagree with [in print]. That is more needed than ever, right now, just to cross the divides.”

Medina has also observed the same issue in regards to digital media, especially in tandem with the recent election.

“People tend to want to seek out viewpoints which confirm what they already believe,” Medina says. “You’re not eating your broccoli and carrots, so to speak, of information. … You find that you don’t have a well-balanced diet of news.”

Regarding a well-balanced diet of news, Price says that local publications can satisfy the need in addition to upholding more dramatic obligations, such as shedding light on community occurrences and occasional wrongdoings.

“In community journalism, one of our jobs is when something is wrong is to shine a big, bright spotlight on it to tell people things are wrong,” Price says.

Although local newspapers may not cover exciting, national-level events, Price says that they play a vital, if not more important, role in maintaining government accountability.

For example, a massive corruption scandal erupted in Bell, a southern California suburb, after the Los Angeles Times acquired the town’s news outlets.

Bell’s reporters, now part of the LA Times, lost interest in covering news in the town, so distracted by national events that not a single reporter showed up to the town’s council meetings. The city council rapidly took advantage of this, paying themselves outlandish sums including salaries close to a million dollars a year. After a few years, LA Times reporters stumbled upon the story and wrote an exposé that led to criminal charges against officials.

Price emphasizes the importance of a healthy local paper and warns of the dangers of underestimating the press.

“Bell could happen anywhere in the United States because we have so many places where there was once a daily or weekly newspaper and now there’s no local coverage at all,” Price says. “We have a crying need in journalism for local news coverage, which is dying very rapidly. The ironic thing is that the LA Times won a Pulitzer for reporting on a situation that they caused.”

While online publications are still alive, Price doesn’t believe it will last.

“Local news, by definition, is local — so if everyone in Palo Alto were to click on a page that we published, that number of clicks wouldn’t even matter to an advertising agency,” Price says. “You couldn’t even make enough money to buy the coffee in your office.”

By contrast, the Weekly has seen continuous increases in online traffic since 2007, according to statistics from Johnson.

Though the Post and Weekly have different strategies, both must stay on their toes to remain relevant in the future.

“We’re all trying to decide what we’re about right now,” Dong says. “Can we continue our mission of providing … thoughtful, trustworthy journalism? Or are we going to move towards cat videos?”