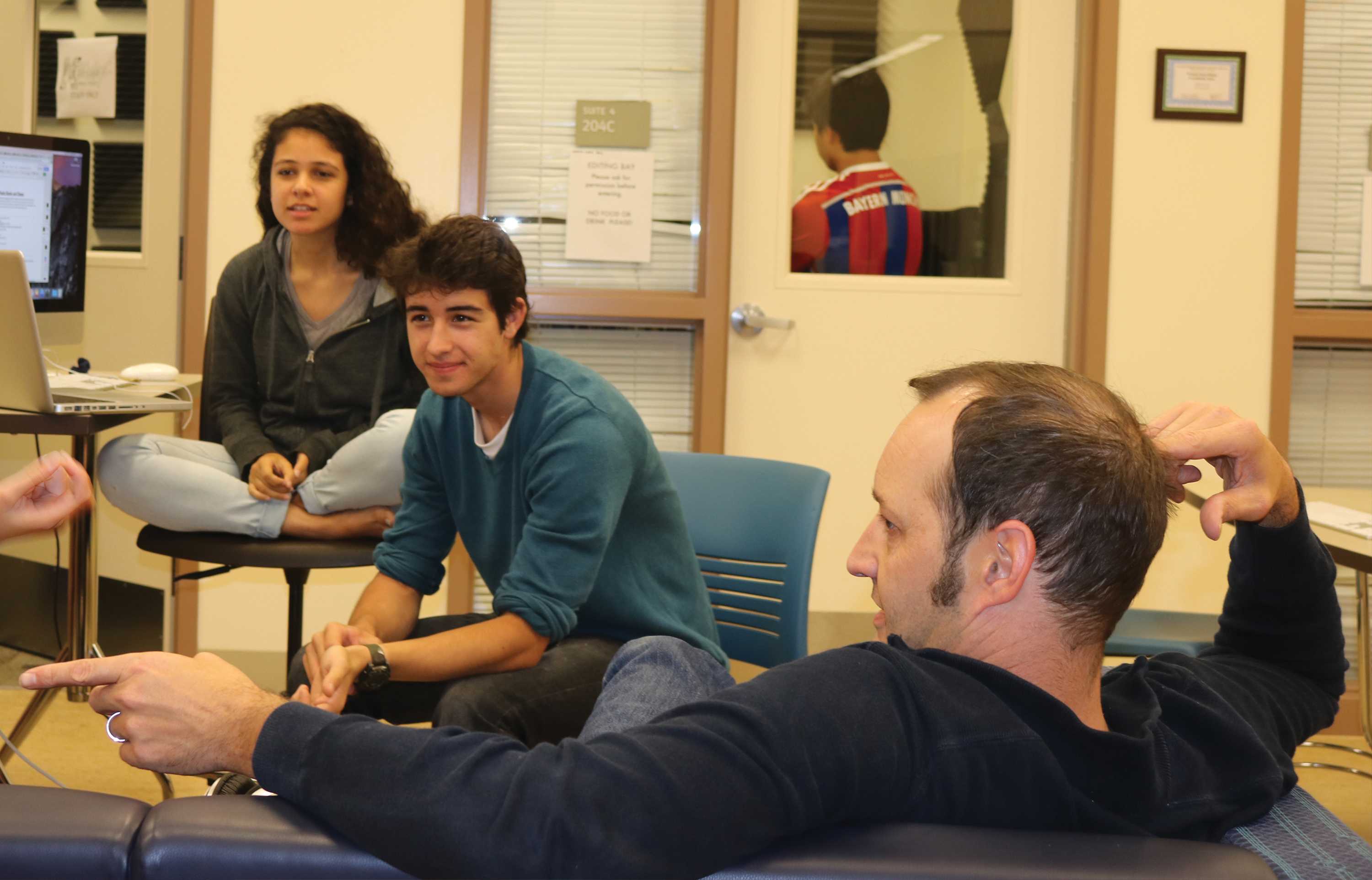 Palo Alto High School administration has introduced two new programs to the curriculum: KPLY Paly Radio (part of Broadcast Journalism) and Communications. Paul Hoeprich, the advisor for KPLY, and Lucy Flippu, the teacher for Communications, are in their first year of running these classes. Verde sat with the students and teachers involved to discuss what these programs offer.

Kane Angell-Atchinson stands at the front of room 205, speaking with a loud voice and commanding his classmates’ attention. He begins to pull out a collection of knick-knacks from his backpack: a Spiderman plush, yellow car cables and a stuffed rhino. He’s giving a how-to speech on how to jump-start a car. Students watch in rapt attention as he plugs the cables in different toys with the swoop of his arm.

With a grand flourish, Angell-Atchinson concludes the speech. Scattered applause follows, and English teacher Lucy Filppu continues on with her schedule for Communications, one of the two new classes added to Paly for the 2015-2016 school year.

Filppu says she created Communications this year because of the lack of focus English classes and electives have on how to be good speakers and listeners.

Filppu gives her students multiple assignments that aim to improve their speech-based skills — skills that her students will presumably use in real-world situations during and after high school.

“We do a lot of informal network small talk,” Filppu says. “We do impromptu speeches. Everybody’s going to give a graduation speech and they’re going to give sales pitches. I want them to practice speaking in a lot of natural settings.”

Already, students in the class feel that the lessons they’ve been learning in Communications have helped them.

Andrea Yau-Chan, a junior, finds that this class is teaching her how to clearly express her thoughts to others.

“The how-to speeches really helped me learn how to articulate myself.” Yau-Chan says.

According to Filppu, Communications differs from other classes at Paly because she has chosen books with specific themes that relate to how people interact with one another.

“We’re going to read ‘Pygmalion,’ a play by George Bernard Shaw, but it has relevance for how men and women communicate, and how class divides us, and how we communicate in culture,” Filppu says. “I want to look at how cultures communicate depending on where you’re from.”

Senior Alexander Gouyet says Communications is unlike any other class he has taken before.

“I find it hard to engage in deep conversations with people on a regular basis,” Gouyet says. “This class has allowed me to connect with people who I did not previously know.”

The timing of Communication’s introduction to the Paly curriculum could not have been better. Filppu says she received     many requests from students to create a class pertinent to their lives outside of high school.

“I felt like a lot of kids were saying there wasn’t relevancy to what they were learning,” Filppu says. “I was a little tired of the focus on academic. Kids need to learn to hold eye contact, get off their phones and speak clearly.” 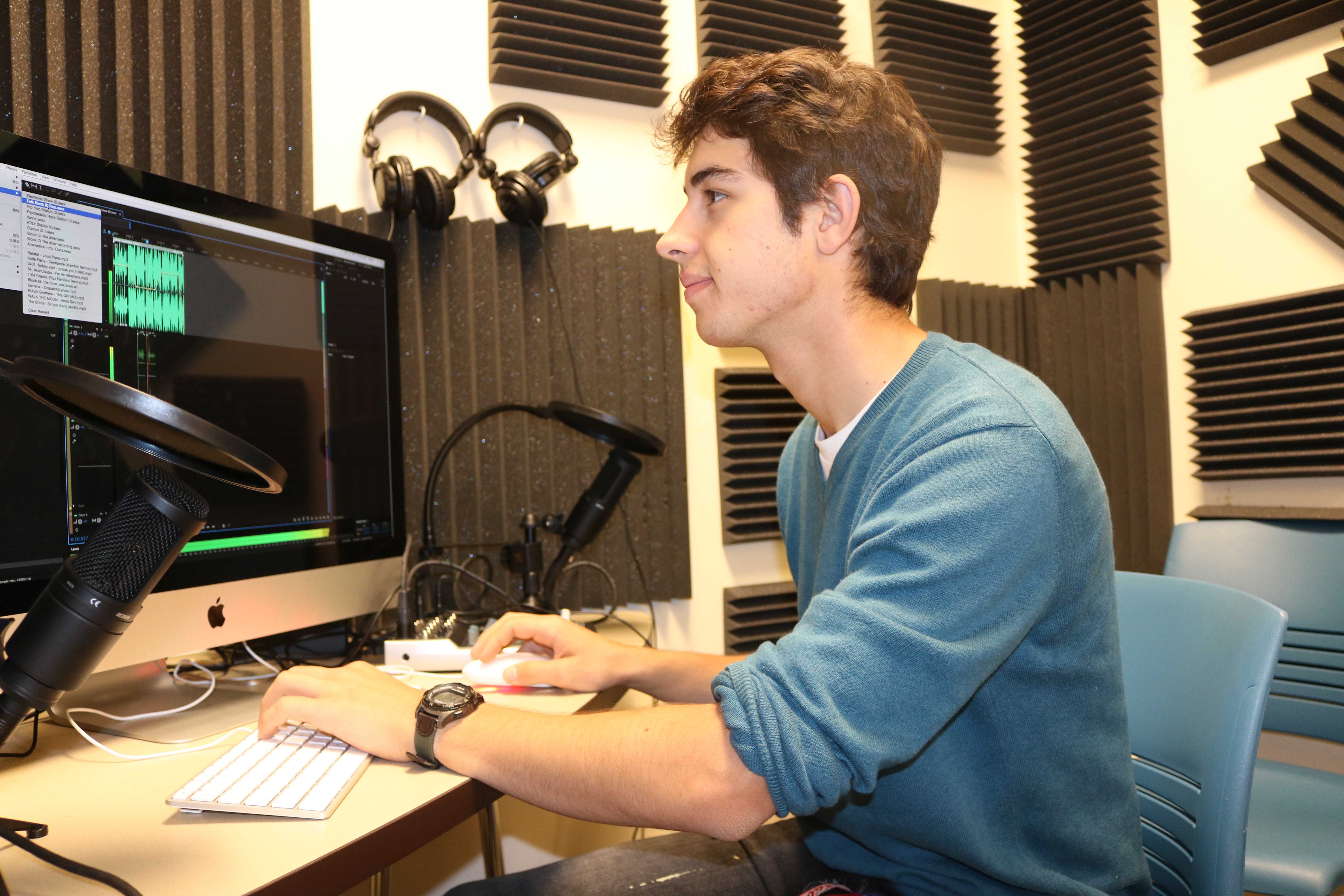 KPLY Paly Radio’s classroom, MAC 204 consists of a few couches and two small recording and editing suites. Senior Liam Noroian, one of eight KPLY members, sits in insulation-foamed Suite Five, where a single chair and desk sit with an amplifier, an iMac and a microphone. The silence in the sound-proofed room is disrupted by a sudden rush of noise that comes out of the speakers sitting alongside the computer.

“You are listening to KPLY Paly radio,” a rush of overlaid voices both male and female announces

KPLY is Paly’s first foray into audio journalism: a 24/7 online radio station and will include music, live interviews and pre-recorded shows. It is part of the broadcast journalism program and meets during first and second period at the same time as InFocus. Originally called “Radio Club,” the students, after running the club for a year, wanted to transform the publication into a full fledged class.

“At first, we were hesitant to make the class because we had so few people, in the club” senior and KPLY member Liam Noroian says. “But Mr. Hoeprich was nice enough to let us be part of his Broadcast Journalism class.”

Hoeprich decided to incorporate these students in his class because of the potential Radio Club had.

“Individually we all went, ‘Wow, this would be  a cool thing to do,’ and I felt like they didn’t have enough guidance,” Hoeprich says. “The time was not there [available], and the infrastructure just was not there.”

With the help of the Paly Media Arts boosters, the former club obtained grants for equipment like sound mixers, microphones and computers.

“Those were the things that were holding them back before,” Hoeprich says. “Passion was not. They had a lot of passion.”

Even with the limited staff and the rapidly developing plans, each KPLY member works hard to fulfill the station’s potential.

“Having so few people proves a challenge,” senior and KPLY member Saba Moussavian says. “Thankfully, everyone on our team is extremely committed to making this [the station] happen.”

The first phase of starting up the station is creating a 24/7 music broadcast with eight blocks of different genres. This is set to go live in early October, according to Noroian.

“Getting the website up and the station fully operational is the first step in the path to regular new, live content,” Noroian says. “And we’re all super psyched to see our efforts turn into a reality.”