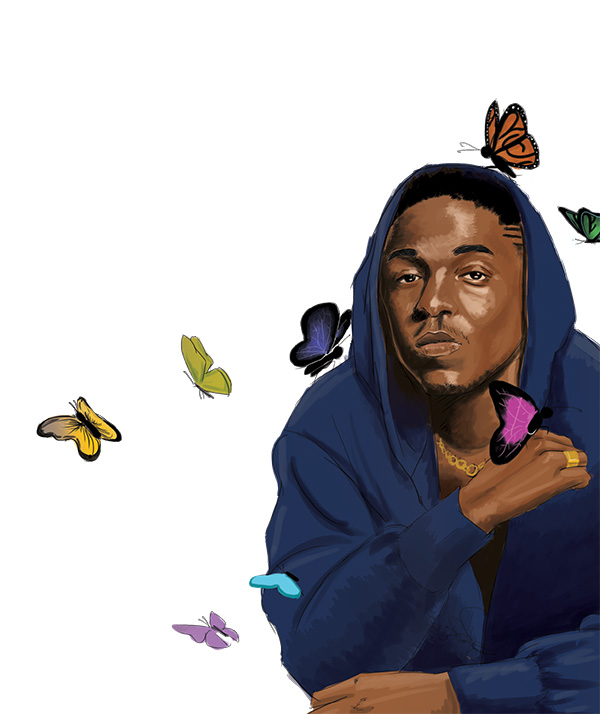 I’m not afraid to talk to people,” told Kendrick Lamar Duckworth to “The Breakfast Club” radio show on April 3, 2015. “I’m not afraid to interact, whether it’s a 5-year-old kid or an 80-year-old man. Of course I read, but I’ll put it to you like this: I’d rather be interacting with a person, rather than gathering up information from somewhere else.”

This response to host Charlemagne’s question, “Do you read a lot?” perfectly illustrates what separates Lamar from other rappers, and even perhaps the rest of the world. Lamar’s wisdom and knowledge is not derived from any singular source — no, he absorbs it thirstily and greedily from the entire world surrounding him. His unconventional way of uncovering life’s secrets, his ability to discern the minute details of those surrounding him, his acute perception of the struggles of the underrepresented — this is what makes Lamar a leader as opposed to a follower. As Lamar said on his first album “Section 80,” “I’m not on the outside looking in. I’m not on the inside looking out. I’m in the dead f—ing center — looking around.”

On March 15, Lamar made hip hop history with the leak-release of his third album, “To Pimp A Butterfly,” the follow-up to what is considered a modern-day classic, “Good Kid, m.A.A.d City.” On “Good Kid” Lamar exhibited one of the most complex and socially conscious autobiographical character portraits found in hip hop to date, with the artist focusing inwardly on his youth and childhood growing up on the streets of Compton. Now, on “Butterfly,” Lamar refocuses his metaphorical lens, this time looking outwardly, at African-American culture and its place in America today.

On “Butterfly,” Lamar makes a noticeable effort to shine light on every perspective, to tell as many stories as possible. These stories, though singularly appearing as simple snapshots, fuse together, forming the movie reel that is “Butterfly.” The rapper jumps effortlessly from character to character, changing the inflection of his voice to depict the vast array of cast members featured on the album.  Unlike in “Good Kid,” Lamar isn’t only telling his story with “Butterfly.” He’s taken it upon himself to tell everyone’s.

“Butterfly” doesn’t just draw from multiple character perspectives. It also spawns from an equally varied set of musical styles.  “Butterfly” drifts from jazz to funk to soul, and then back to hip hop throughout its entirety, contributing to a colorful overall aesthetic.

In all aspects of “Butterfly,” Lamar’s desire to include absolutely everything — from the endless list of varying narratives, to the diverse sonic experimentation — comes through in a brilliant display of social and musical consciousness. The album is a complex work of art to say the least — and, luckily, in the case of Lamar, saying the least is not within his capacity.

One of the standout tracks that makes good use of this multiple perspective contrast is the opener, “Wesley’s Theory.” Its concept is loosely inspired by the tragic story of African-American actor Wesley Snipes and more broadly depicts the entertainment business’ exploitation of successful black artists. Courtesy of bassist Thundercat, globulized, jello-like bass lines warble vibrantly as Lamar raps in the first verse from the perspective of the stereotypical, newly successful rapper, detailing the reckless and indulgent acts of partying and buying jewelry so as to pimp oneself to superficial extravagance. In the second verse, Lamar switches sides and raps from the perspective of the government or ‘Uncle Sam,’ luring the young artist into spending senselessly, and promising him a seemingly happy and fulfilling life.

Another great example of a track that pushes the boundaries of perspective is the track “The Blacker the Berry.” With it’s hammering snares and ominous instrumental a la producer Boi-1da, Lamar snaps, angrily growling out three verses that are all aimed at convincing you he’s “the biggest hypocrite of 2015.” Lamar goes down a list of black stereotypes, illustrating the self-hatred prevalent in, not only past, but also current black communities today. To emphasize this point, Lamar ends his third verse with the couplet, “So why did I weep when Trayvon Martin was in the street? / When gang-banging make me kill a n— blacker than me? / Hypocrite.”

Then you have the dichotomous pairing of the tracks “u” and “i,” one addressing Lamar’s self-loathing and depression and the other promoting self-appreciation and universal love. Ironically, on “u” Lamar focuses only on himself, yet on “i” he speaks for everybody.

On “u,” Lamar viciously berates himself in the third person, slowly tripping into a pained, inebriated flow as clinky pianos and shrill trumpets decrescendo in tandem to a depressingly lumbering kick drum. As sounds of bottles clinking and swishing interject Lamar’s verse, the line “I’m f—ed up, but I ain’t as f—ed up as you,” aptly sums up the degree of Lamar’s self-hatred and depression.

Then on the song “i,” you have Lamar yelling in a high pitched voice, “I love myself,” over a soulful, feel-good Isley Brothers sample, conveying absolute positivity and love through a seemingly narcissistic message. Lamar cuts off in the middle of the song to spit an a capella freestyle, talking about how the “infamous, sensitive N-word [that] controls” his people actually originates from the word “Negus,” meaning “black emperor, king [and] ruler.” In this way, Lamar reclaims the already reclaimed N-word, redefining it in a positive light.

The Caterpillar and the Butterfly

One aspect of “Butterfly” that has not been brought up thus far, but is perhaps the most significant nuance of the album, is that every story, every narrative, every lyric that Lamar presents to the listener is simultaneously being posed toward the ghost of Tupac Shakur — the late, legendary West Coast rapper who also hailed from Compton, and who was known for his emotive storytelling and lyricism.

In fact, from the very beginning of “Butterfly,” Lamar slowly constructs a single poem that acts as the intros and outros throughout the album, dictating the topics of either the next or previous songs (For example, the song “u” about Lamar’s battles with depression is preceded by the lines, “I remember you was conflicted. Misusing your influence. Sometimes I did the same. Abusing my power, full of resentment. Resentment that turned into a deep depression. Found myself screaming in a hotel room”). This poem is finalized in the last song, “Mortal Man,” where  Lamar reveals he’s been talking to Tupac the entire time.

Promptly afterwards, Lamar and Tupac begin candidly discussing the state of the black community, and, uncannily, it seems like Tupac’s words reference today’s world, not just in his time nearly two decades ago. This haunting, creeping realization that seemingly nothing has changed is starkly contrasted by the second and final poem Lamar tells to Tupac, about change and hope — a poem about the caterpillar and the butterfly.

According to Lamar, “One thing [the caterpillar] notice[s] is how much the world shuns him, but praises the butterfly. The butterfly represents the talent, the thoughtfulness and the beauty within the caterpillar. But having a harsh outlook on life the caterpillar sees the butterfly as weak and figures out a way to pimp it to his own benefits.” Lamar’s literary allusion to Harper Lee’s “To Kill A Mockingbird” in his album title “To Pimp A Butterfly,” finally comes full circle in this moment — just like how killing an innocent mockingbird, or causing one to loose their innocence, is morally wrong, Lamar claims that pimping a butterfly, or cutting short the potential of a talented individual for selfish motives, is also morally wrong.

Lamar further elucidates that the “cocoon,” or the mad city that surrounds the caterpillar, traps him, further cutting short his vision, but by looking back and returning to his origins, he’s able to “bring back new concepts.” Through this process, “wings begin to emerge, breaking the cycle of feeling stagnant. Finally free, the butterfly sheds light on situations that the caterpillar never considered, ending the internal struggle. Although the butterfly and caterpillar are completely different, they are one and the same.” Essentially, Lamar’s point is that through our past we are able to move forward. When he asks for Tupac’s perspective, he receives no reply. The message is clear: We need to look within ourselves if we want to seek change.    v