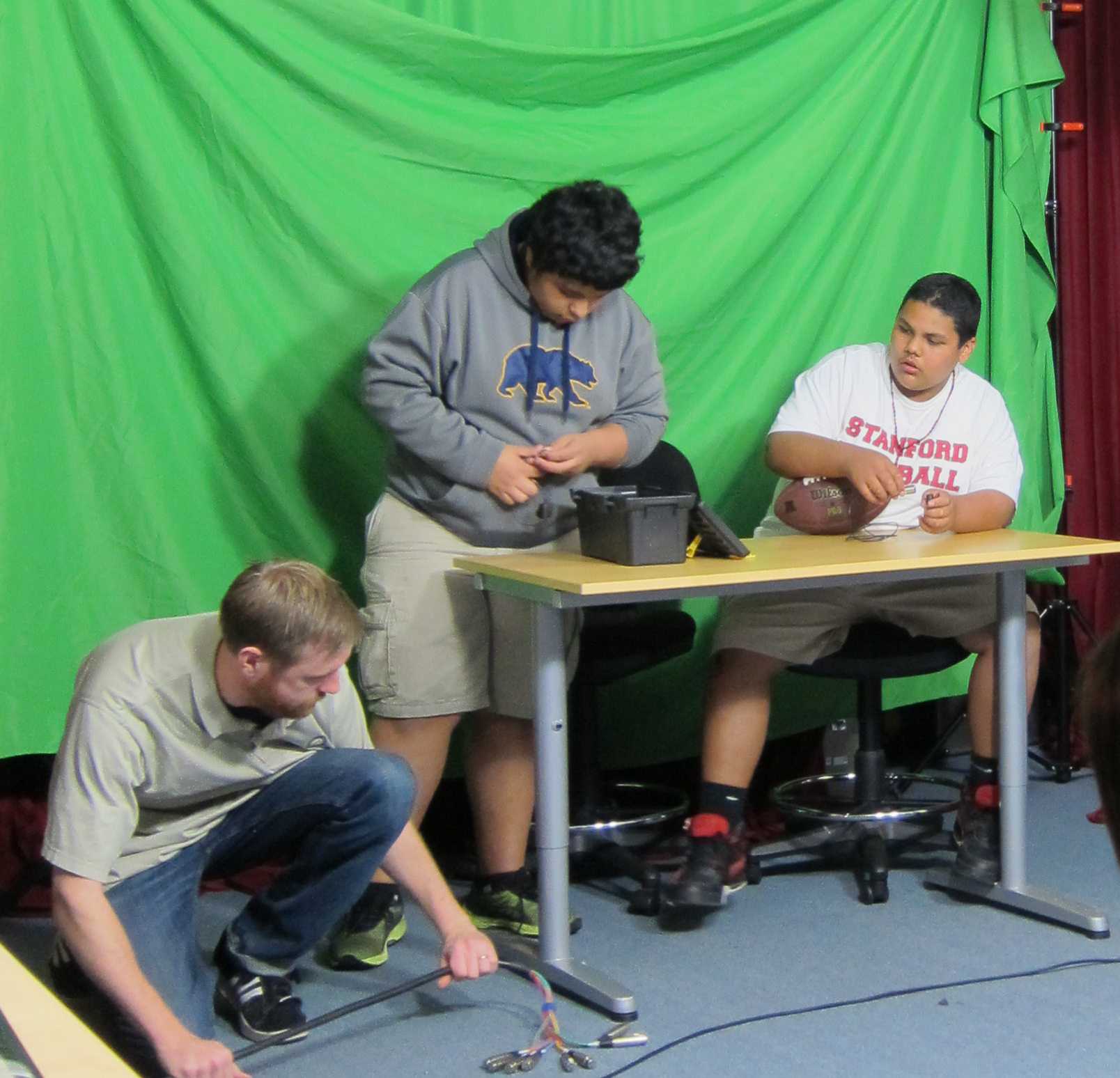 More than Just a Game

Following Michele Sharkey into the room, I pull open the door of the media arts center at the San Francisco 49ers Academy. Students shuffle in their seats to face us and start a chorus of “Hi, Ms. Sharkey!” They cheer “Forty Niners!” when Sharkey asks their favorite football team.

Located in one of the most at-risk neighborhoods in East Palo Alto, the 49ers Academy provides a safe haven for its students to learn and grow. With its motto, “Programs don’t change kids, relationships do,” the academy’s main philosophy involves helping its students through interactions and relationships with educators, rather than solely providing them with the most advanced technology.

The 49ers recent showing at the Super Bowl proved unsuccessful, but their namesake school continues to thrive.

Kendra Gragg, an eighth grade teacher at the academy, describes how the motto plays into the classroom.

“There is a strong family-like atmosphere that I think is unique to the academy,” Gragg says. “I have been teaching at 49ers Academy for over a decade and I literally have students in my classroom now who I knew as babies.”

The school, founded in 1996, is different than a traditional middle school, according to Michele Sharkey, Executive Director at the school.

“We are… a private non-profit, embedded in a public school, which makes us different,” Sharkey says. “We kind of act like a charter [school], but we still are part of the public school system.”

Students at the 49ers Academy attend the school based on district lines. There is no lottery system or fee required with attendence.

The difference in success between children who attend the academy and those who attend other middle schools in the area has not been quantifiable in the past, but the policy has changed as of last year and the school is beginning to track the freshman class, according to Sharkey.

However, the success of the school can be seen in the growth of the kids rather than by the numbers. Former 49ers quarterback Steve Bono, who served at the school and attended the annual fundraisers, attests to the importance of the school.

“I believe the biggest impact they have on their students is the attention they give them and the confidence that breeds to allow the students to perform their best,” Bono says.

Gragg explains why she thinks a school of this caliber is necessary.

“I am a strong proponent of public education, and I believe we have an obligation to provide students the best possible education in their local school environment,” Gragg says. “The academy is able to do that in a neighborhood school setting that is supportive, nurturing and academically rigorous.”

According to the 49ers Academy website, 90 percent of players on the current roster have visited the school at least once. Often, players and former players help build structures and hang out with the kids, forming a long-standing bond.

“The guys will come out and mentor the kids and do different activities with them,” Sharkey says.

Bono has experienced this firsthand after helping at some of the school events.

“The fundraising events have always been a lot of fun; they are large galas in wonderful settings,” Bono says. “My… favorite event was distributing turkeys to families in need for Thanksgiving.”

In addition to the unique bonds the students form with players on the team, students are able to take electives not traditionally offered by schools in East Palo Alto. One of the electives provided by the school is a media arts class.

Every Wednesday morning in the studio, the students produce a broadcast TV show that informs the school of upcoming events, such as dances. From sound to film, students taking the class learn how to produce everything necessary in making the show.

The school is also able to provide students with other elective classes, such as music, often bringing in student volunteers to help.

Gunn senior Chris Conner offered his experience to act as a music instructor at the school.

“The lessons focused on playing the trumpet, but I also taught them about reading music and scales,” Conner says. “It was a rewarding experience. It felt good seeing the kids improve their musical talents.”

The funding for these classes comes from a variety of sources, including private donors, grants and funding from the 49ers football team, and grants the neighborhood students with opportunities not traditionally offered in East Palo Alto, according to Sharkey. Through these means, the academy is given nearly a million dollars each year in addition to the financial backing provided by the state.

“We are the pretty much the top charity that [the 49ers] fund in the community, so they give us money every year and also support us by providing players to do events for us,” Sharkey says.

This funding also allows the school to provide for programs other than elective classes.

“We have extended day, so our kids go to school everyday until four o’clock and we have an afterschool program that goes until six,” Sharkey says.

In terms of required classes, teachers work to motivate students and help them perform to their maximum potential. Gragg describes her experiences as a long-time teacher at the 49ers Academy.

“It is challenging, but so rewarding,” Gragg says. “My students amaze me.  They definitely keep me on my toes, and not a day goes by that they don’t make me smile or laugh out loud.”

To ensure graduates from academy can achieve their maximum potential, the organization plans to expand into the high schools that its students feed into, including Menlo Atherton, East Palo Alto High, Eastside, Claremont and Woodside, according to Sharkey.

“We want to actually expand into the high school, so we have a staff member working at the high school to work with our kids all the way through graduation,” Sharkey says.