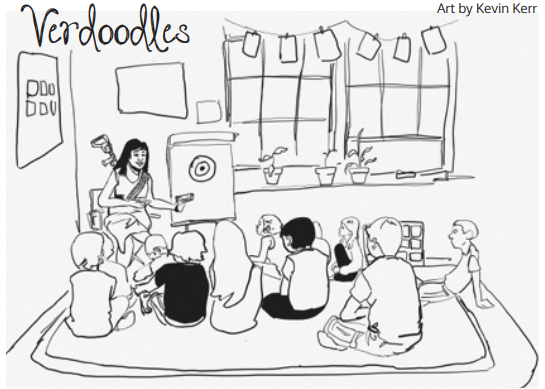 “We have to harden our schools, not soften them up.”

These were the words of President Donald Trump just days after the Marjory Stoneman Douglas High School shooting in Parkland, Florida, that killed 17 people. That day, Trump also voiced his support for arming teachers. We do not share these sentiments. Like MSD student Emma Gonzalez famously said, we call “B.S.”

More guns in schools are not the solution. While the Palo Alto Unified School District should take steps towards improving school safety in the wake of this tragedy, there are more effective ways to do this than arming teachers. For example, Verde commends our local representatives for taking action by passing a resolution urging the California state legislature to implement stricter gun control measures.

“We’ve always had school board policy against keeping guns at school,” school board member Melissa Caswell says. “That’s one thing we can do as elected officials as it’s stronger when we have a resolution from the whole board rather than individuals.”

This solution provides means for improvement nationally; however, on the smaller scale, we should first focus on improving Paly’s lockdown protocol. While we have had numerous fire drills this year, we only have code red drills once a year. Especially in light of the recent shootings, the frequency of lockdown drills must be increased. In addition, although the district has established an effective blanket procedure for code red events, teachers should also go over specific protocols for their classrooms. Arming teachers would be especially ineffective in California; it is rare for the average Palo Altan to own a gun or have adequate training in using a firearm. On a practical level, getting training for these teachers would be unfeasible.

“it is rare for the average Palo Altan to own a gun or have adequate training in using a firearm. On a practical level, getting training for these teachers would be unfeasible.“

“It [arming teachers] is a bad idea,” AP US History teacher Jack Bungarden says. “Maybe they [armed teachers] will hit something they’re supposed to, or maybe they’ll just hit something, including maybe a kid.” Already, we’ve seen the potential consequences of this proposal. On March 15, a reserve police officer teaching a gun safety class at Seaside High School in Northern California accidentally discharged his weapon, injuring a 17-year-old student.

Although California is stepping in the right direction to making schools safer, our country as a whole still has a long way to go. It is our responsibility as a more liberal city to advocate for further gun reform outside of Palo Alto.

After lockdown, more to say

This editorial was written before the March 29 lockdown at Palo Alto High School. After the lockdown, at presstime, Verde is further convinced that code red drills need to be revamped. Students need more practice building barricades. Students need to know what to do if they’re stuck outside of class. Students need a better system of notification. It is a harsh reality that until gun laws are reformed, every school needs to be prepared in the case of a mass shooting.