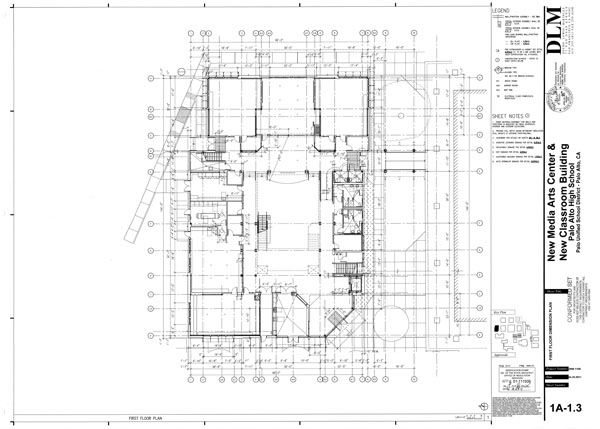 Light streams through the large glass windows, illuminating the pale palette of the building and broadening the expanse of the common room.

Construction crews finished the exterior of the new Media Arts Center in January 2014. The center was imagined with the intention of spurring collaboration between — and providing technological advancement to — the numerous Palo Alto High School publications and media arts programs. The anticipation surrounding the building’s opening has culminated over the past six months leading up to a few pre-opening tours.

“It [MAC] will really benefit the entire Paly community,” says Paly principal Kim Diorio. “While it’s built primarily for media arts programs, the overall vision is that everyone in the Paly community will benefit from the building.”

The atrium, a large open space surrounded by classrooms and an encompassing balcony, will host future staff meetings and school dances. It is one of the most compelling components for the community, with seating for 150 to 200 people and a large viewing screen inspired by Arizona State’s Walter Cronkite School of Journalism’s First Amendment Forum.

“I think there has been a lot of thought and forward thinking going into the building,” Diorio says. “It [the atrium] is going to be a real showcase for our school.”

According to Diorio, the state-of-the-art building that cost around $10 million and has taken three years to build will be supplied with newly purchased furniture. With the new building comes the need to equip the space with comodities, fixtures and technology. The furnishing includes everything from soft seating, a well-mounted LCD screens and “writable glass” and even a 68-foot digital ticker wrapping around the front of the building.

“There’s a lot of design thinking involved in terms of creating learning spaces that really foster collaboration for our students,” Diorio says.

The journalism classroom is known to be a place of teamwork, facilitating group activities where students from each section on a publication come together to develop, edit and publish each edition. To promote growth within the Paly journalism community in addition to classrooms, the MAC will use the surrounding inside balcony and the first floor’s open atrium.

“At least in The Campanile aspect of journalism we really collaborate with our story ideas,” says Campanile senior staff writer Heather Strathearn. “Each person brings in a different paper full of news ideas, opinion ideas and lifestyle ideas and then we all bring them up and write them on the board.”

Diorio says to increase student sharing, the MAC will have a joint kichen café equipped with a stove, refrigerator, and microwave to facilitate meals for production nights. The kitchen will open up a new environment for collaboration between the numerous publications on the Paly campus.

The MAC was designed around five main themes adopted from Chris O’Brien, a Mercury News reporter and publisher of the Next Newsroom website: community, collaboration, innovation, transparency and multi-platform publishing. Incoming English teachers plan to use the set-up to increase collaboration, too, in the hope of incorporating the journalism dynamic into their curriculums.

This overall theme of collaboration will be achieved through the easy mobility of the new desks and flexibility of the individual classrooms.

According to a study done in January and February of 2013 by Harris Interactive, one of the world’s leading market research firms, 92 percent of middle school and high schoolers prefer learning on mobile devices. This generation is growing up along with the fast-paced evolution of technology forcing the learning environment to evolve to include computers and tablets. This new builiding will feature a bundle of desktops, two iPad mini carts and three laptop carts.

“As we bring in the technology into the building, it’s not going to look like any other building on this campus,” Diorio says.

Paul Kandell, a beginning journalism teacher and Voice and Verde advisor, has been central in gathering the ideas and organizing teachers and programs that will be in the building.

“He worked with the Media Art Center boosters to make sure the furniture and the equipment is really state of the art and meeting the needs of all the various programs,” Diorio says.

Two unique features will be included. First, a time capsule, a teaching tool asking students: “What represents us now that would be interesting in the future?” The other feature includes tiles in the bathrooms etched with unintentionally funny headlines from professional publications.

“It’s very forward-thinking,” Diorio says. “We are making sure the furniture is ergonomic and comfortable, the learning space and the environment has a good feel to it for students and there is the ability to move the furniture so you can collaborate. It feels like a place where ideas are born and innovation is taking place.” v