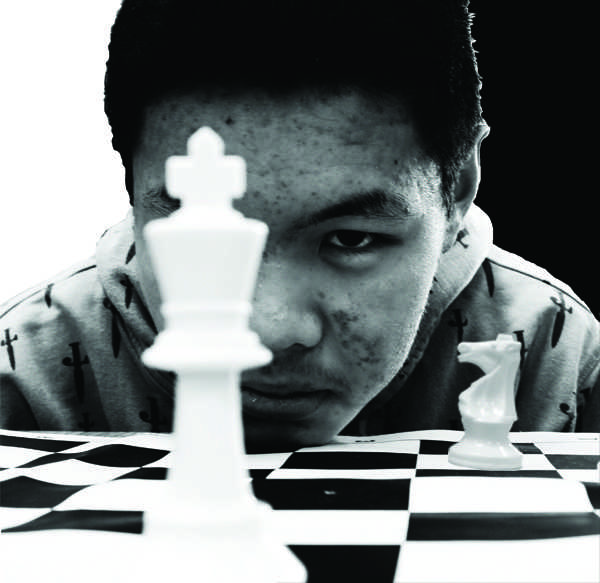 THE FISCHER KING: Chess Club president Wilson Wang poses in a re-creation of a photo of chess player Bobby Fischer taken by Philippe Halsman in 1967. “I’ve looked at a number of his games” says freshman chess club member James Pederson of Fischer. “Even when he was a child he was still an excellent chess player.” Photo by Charu Srivastava

At 11:35 a.m.  the soldiers begin to assemble, commanded by a flurry of hands above  a black-and-white board, in air laced with laughter and the smell of peanut butter.

“Well, that’s one of the better ways to lose, I must say,” his opponent junior Daniel Sonner says.

At 11:46 a.m. two white knights and a pawn have become prisoners of war, dumped next to apple slices in a bowl and two red gummy bear vitamins lounging on a plastic lid.

Freshman Everett Gee peers  over from his nearby desk, saying, “ I think black’s screwed.”

At noon Sonner’s troops pick up a fresh burst of speed, fueled by sushi dipped in soy sauce. Upon every bite, his fingers flit a little faster.

To these soldiers, this is the sound of bloodless slaughter.

And to the members of Paly’s Chess Club, it’s a friendly fight that commences every Thursday at lunchtime in room 310. Consisting of a scattering of clustered desks occupied by snarky upperclassmen, screaming freshman boys and other enthusiasts, the club has been around for at least several years, according to current sponsor social studies teacher Deborah Whitson. After fluctuating in popularity, the club has now reached one of its larger sizes, with a weekly showing of about 20 students, according to sophomore and club president Wilson Wang.

Wang has experienced chess at various levels, from the casualties of serious competition to the good-natured takeouts of Paly’s club of amateurs. Having played the game since kindergarten, Wang used to hold a national ranking. But in high school he quit big league tournaments to make more time for academics, and now plays in Chess Club’s relaxed atmosphere.

Another Thursday at another 11:35 a.m. the fun starts straight away at the opening lunch bell. Across the room, someone shouts, “Antonio sucks at chess!” as a fresh game commences with the sound of resurrected soldiers spilt out of their plastic bag graves.

In the corner next to the door, freshmen Trevor Filseth and Misha Lavva compete in sober silence. In another corner, Erickson and Sonner play in a rousing round of bughouse, a four player variant of the game, complete with crunching fritos, loud suggestions and back-shaking guffaws. Sitting side by side, they raise their arms to eat at the same time.

Wang notes several differences between top-level opponents and the players at Paly. As a serious competitor, he developed a defensive style with which he ground down his more attack-minded opponents. When he plays for fun, however, he just goes for the quickest checkmate possible. During club time, Wang prefers to play bughouse or watch games.

“[At chess club] I don’t usually play because whenever I play, I win so it’s no fun for the other person,” Wang says.

The stakes are also different. Wang has traveled to Las Vegas for a few tournaments, where he once almost got first place. And even runners up, he says, can win money. Paly only competes for trophies. According to Wang, Paly’s competition is tough.

“In the Bay Area so many people are good at chess, it’s ridiculous,” he says. “If I move to Wyoming I’d be the best player in the state.”

According to senior John Kim, the club’s vice president, Chess Club competed in a league with other schools in the Bay Area during his freshman and sophomore years, and won third place in the Santa Clara County High School Chess Champs competition the past couple years. This year they might attend one tournament in the spring. He remembers the competitions as a positive bonding experience.

“They were a lot of fun because we went as a group,” Kim says. “We analyzed our games together, laughed at our mistakes, and overall it was an amazing experience.”

At 11:46 a.m. a new rush of students stroll through the club door, clutching burgers and milk, and set up in the center of the room. Still sitting in a bubble of quiet, Lavva holds prisoner one knight and three pawns lined up in a row, his arm flinching once before darting across the board. Filseth leans his jaw in his hands, his elbow a pillar to two bishops and two pawns. Next to them, Wang stands over a desk and bickers with the occupant.

Pederson, who started out at the Jordan Middle School chess club, didn’t know Paly competed in any tournaments when he joined at the start of this year. He aims for personal improvement, and some quality chess time with his friends.

“I like to play chess with my friend Everett,” Pederson says. “I just want to become a better player, that’s it.”

According to Pederson, the club has little formal organization — essentially, it’s just a place to play chess. The president doesn’t attend every meeting (in fact, not everyone knows who the president is) and the members segregate into their own groups of friends, often sorted by grade level. But they all share, of course, an appreciation for this black-and-white-war

Both Pederson and Wang hold chess as distinct from other games. For Pederson the appeal lies in the fact that he can use strategy and skill to beat luck. For Wang, there’s thrill in the real life relevance. According to him, a game of chess follows many of the rules of actual war. For instance, in both situations more troops (or pieces) put one at an advantage. They also have strategic similarities.

“In actual war, you want to control the high ground,” Wang says. “In chess, that’s also one of the basic principles that you learn early on, to control the center.”

Wang notes that these skills are developed, not inherited. Pederson, too, attributes his progress to abundant practice rather than natural skill.

“In chess, you don’t really have any talent,” Wang says. “You have to start from scratch.”

By noon the troops have surged into a quickening crescendo. Spread around the room, six separate teams battle to their bitter, joyful ends, amid laughter and footsteps and the sound of plastic slamming into hardwood desks. Sonner flips two knights in one hand as he plans his next move.

“Dude, my life bar is just dropping,” his opponent says, urging him on. “Come on, let’s go.”

“Stop suggesting him!” someone shouts across the room, and the room skips from noise to silence to an eruption of snickers.  It’s 12:09. As most students clean up, Lavva and Filseth play through the last minute with continued concentration. When the bell rings, they stand up stimaltaneously and linger for one more moment.

Another game settled, he and Filseth begin to sweep their hands over the battlefield, picking up the pieces.