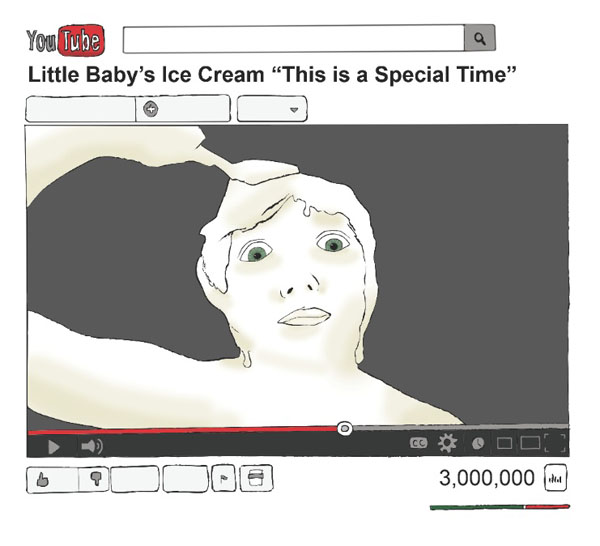 The commercial for Little Baby’s Ice Cream shown here is a prime example of reverse marketing, the perfect combination of freaky and fascinating. [Art by Hanako Gallagher]

Think back: when was the last time you saw someone inexplicably covered head to toe in layers of thick, melty vanilla ice cream?Was the person in question staring unblinkingly at a video camera to the tune of an eerie lullaby-esque melody?Most importantly, did they have a spoon clenched in their hand, which they then used to scoop out and eat a portion of their skull?

If this scenario sounds familiar, then you’ve likely fallen victim to the strange phenomenon of reverse marketing, which involves utilizing gross, off-putting, or otherwise peculiar advertisements to draw people to a product. The marketing team of Little Baby’s Ice Cream put out the commercial described above just weeks ago via YouTube, and already it has more than two million views and roughly 13,000 comments. Some users seem disgusted, some confused, and all intrigued.

Based on the amount of publicity this minute-long video has generated in barelt two months, it’s safe to say that Little Baby’s Ice Cream can look forward to booming business — or can it? Reverse marketing may be a foolproof recipe for exposure and a huge leap in consumer awareness, but does it last beyond those 15 minutes of dazzling Internet fame?

“I think advertisements like this might work by increasing physiological arousal, or stress,” Jamil Zaki, assistant professor of psychology at Stanford University, says regarding reverse marketing. “This physiological response, in turn, improves memory, and may make these ads ‘stick.’ However, if it causes the product to be associated with a negative experience, this strategy could backfire.”

Marketing professor James Lattin is on the fence about reverse marketing as well. “I guess there is value in ‘cutting through the clutter’ — an ad must be noticed these days to have any impact — but I don’t have a compelling argument for why a disturbing ad is necessarily a better approach or sustainable in the long run,” he says.

“No idea what future ad trends will be, as I’m not sure how much advertisers pay attention to psychological research,” Zaki says. So essentially,  the future of advertising could go in any direction at this point.

Little Baby’s Ice Cream is not the first company to employ the strategy of reverse marketing. Although the vast majority of advertisers tend towards the safe classic approach, many corporations both large and small have had success with images and infomercials that one wouldn’t normally consider particularly consumer-friendly.

Many will recall the original “Cadbury eyebrows” commercial that aired in 2009, consisting of two kids in a photographer’s studio who suddenly, without warning, burst into an elaborately crafted choreography routine — using their eyebrows. To the techno-pop tune of Freestyle Express’s “Don’t Stop the Rock,” the dynamic duo move their respective brows up, down, and all around until the Cadbury logo appears over top of the screen, completely unrelated to anything else in the ad.

Another notable example is David Lynch’s thoroughly unsettling “Barbie head coffee” commercial, a four-minute video of a man talking softly to a Barbie doll whose head he’s squeezing in his palm. As a slow, waltz-like track plays in the background, the man (presumably David himself) converses with the doll, “convincing” her to try some of his coffee while complimenting her on her appearance and shaking the camera around a little bit, in case you weren’t already freaked out by the basic premise of the ad.

As for advertisements that are non-media-oriented, restaurant chain Oldtimer has commandeered a tunnel in the Austrian countryside to publicize its services. “All you can eat rest stop” reads the billboard around the tunnel, as the massive face of a wide-eyed, open-mouthed woman looks down upon the road, her lips perfectly contoured around the edges of the tunnel. Sure, driving along the freeway you might be startled to round the turn and be confronted with such an ad, but there’s absolutely no question that it would grab your attention.

The most common factors of reverse marketing are unusual or unexpected images and a soundtrack that creepily captivates or otherwise engages the viewer. Traditional marketing, on the other hand, takes no chances and plays no wild cards when it comes to advertising, thereby appealing to a wider audience.

The key difference between traditional and reverse marketing, however, is the target. Traditional marketing reaches out easily to its intended demographic, inviting them in and encouraging them to spend money on a specific product, whereas reverse marketing sparks a more general curiosity. Often the audience of a reverse marketing ad has no idea what the ad is trying to sell to them.

Fortunately for those putting stock in reverse marketing, this nagging need to know exactly what just happened typically leads people to Google, which will point them exactly where advertisers want: to the home site of their product. Indirectly, reverse marketing can be much more effective than traditional marketing because it brings in website traffic and revenue from people who are intrigued by the unorthodox visuals and audible oddities.

Regardless of what the average viewer might interpret from these arbitrary advertisements, the YouTube view counts speak for themselves. Reverse marketing does work, to an extent — it attracts viewership and allows for companies to expand upon their products in later ads (at least so long as their audience stays curious after the initial campaign).

So if you’re considering a career in marketing, take note: Little Baby’s Ice Cream could very well be our first glimpse into what lies ahead.

This woman’s gaping mouth beckons to travelers on a road in Austria. [Art by Hanako Gallagher]