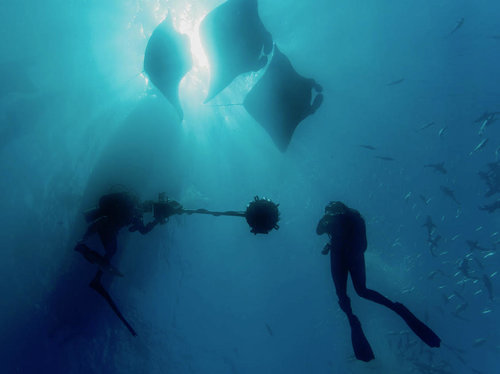 Rick Miskiv, a 360 videographer, films the open ocean with a VRTUL2 camera. Image by Pete Niesen, Immerse production. Used with the permission of Woolsey.

*Editor’s note: Kayla Brand, the writer of this story, is the president of the ClimateVision club, one of the  student clubs which invited Erika Woolsey and is putting on this event.

The presentation, hosted by the ClimateVision Club and the Environmental Clubs Organization, will provide students with snacks and a place to check-in during Tutorial

Through Hydrous, the nonprofit she co-founded, Woolsey said she and her team created the VR experience, “Immerse.” The Hydrous mission, she said, is to make the ocean more accessible to the general public and to generate empathy for the aquatic ecosystem. The virtual reality she presents tomorrow will be the culmination of two years of work.

“I hope… [students] learn a little something about the ocean and coral reefs that they didn’t know before, especially related to climate change,” she said. “I also hope that it helps students generate their own ideas about how to approach and solve big problems, maybe using technology.”

Woolsey said she was inspired to found Hydrous after witnessing devastating world-wide coral bleaching in 2016, and the limited subsequent public response.

She said she was first drawn to the subject of oceans and coral reefs while diving. However, most of the most of the world’s population faces significant barriers to their ability to personally visit a coral reef, she says. She hopes the VR experience will give students a chance to experience the wildlife of the ocean without getting in the water.

“I didn’t start diving until I was 18 or 19, and very few people get to dive at all,” she said. “So my hope is that this can be what feels like a real dive … to get a taste of what the ocean is like.”