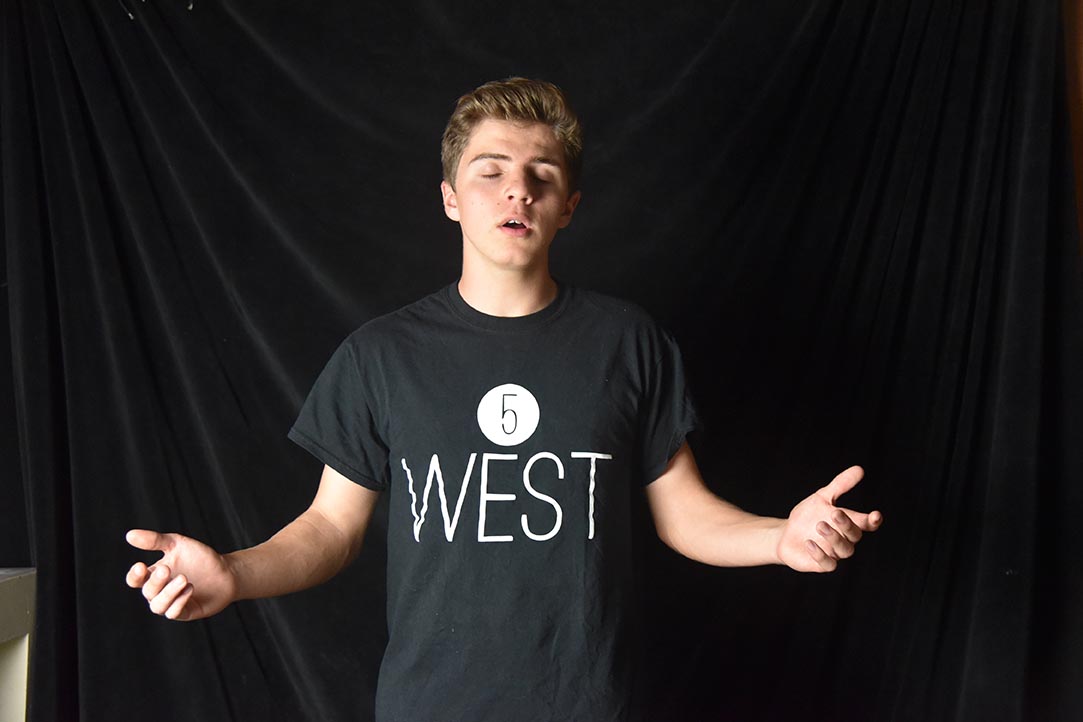 Luc in the Limelight

There  Is a pause before Palo Alo High School sophomore Luc L’Heureux sings Hillsong Worship’s ‘‘I surrender.’’ His hands spread open as his voice softens to focus on the notes echoing throughout the portrait studio in Paly’s Media Arts Center.

This is a typical moment — performing in front of a camera — for this aspiring actor and singer with an international pedigree, a flair for the dramatic and an abounding faith to guide him.

While many audition countless times before receiving a role, L’Heureux has only attended two auditions and starred in three movies. The young performer is currently part of the newly formed boy band 5West, and will soon be a part of a reality television show about the musical group.

L’Heureux grew up in Monaco, where he started his career as an actor. At 13, a local producer from the Italian company Movies on International Holding invited the students of his school to audition for a film called “Teen Star Academy,” which follows the lives of several teenagers on their paths to stardom. After L’Heureux’s first reading, he was cast as a character uniquely developed for his own personality; the character was even named Luc.

“I didn’t really know what I was auditioning for but they told us it was something like ‘High School Musical’ in the south of France,” L’Heureux says.

After “Teen Star Academy,” L’Heureux went on to act in two more films produced by the same company: “6 Children & 1 Grandfather,” which came out in 2016, and “Mission Possible,” which is still in production.

‘‘I’ve learned that before you go into the work you need to be prepared and your heart needs to be right. If you go in with a weary mindset or one that’s not with patience you can’t do anything.”

“It [filming] was an experience of adapting to different situations,’’ L’Heureux says. ‘‘I’ve learned that before you go into the work you need to be prepared and your heart needs to be right. If you go in with a weary mindset or one that’s not with patience you can’t do anything.”

Growing up in the industry

Fifteen may seem too young for parents to sign-off on letting their children enter such a challenging professional field. However, despite being physically apart for months, the L’Heureux family has learned to stay supportive of their son’s growing career.

“They [my parents] love it,” L’Heureux says. “They are totally on board.”

While some aspiring actors focus on establishing a reputation within the entertainment industry, L’Heureux values school just as much.

“This is what I want to do with my life, but that doesn’t mean giving up on school,” L’Heureux says. “I need to work hard, I need to be diligent, and I have to be a good example. That is so important and it reflects on stage and on set.”

Although L’Heureux has since moved to Palo Alto from Monaco, where the movies were filmed, both L’Heureux and his sister, Coco, have flown back to Europe to film during the summers. L’Heureux’s passion for performing also encourages him to find a sense of self and maturity. 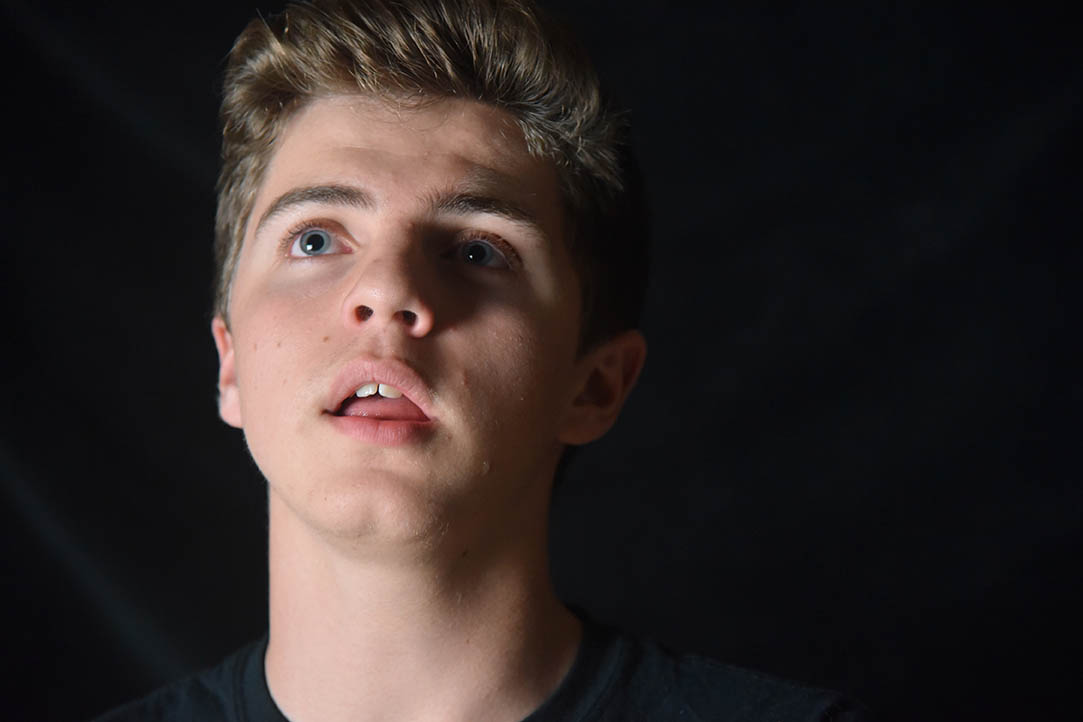 All glory goes up

L’Heureux has had more success in his career than most adults. He attributes his extensive performing career to God.

“When you give it [your dreams and passions] to God he just gives you so many great things because He knows your heart is right,” L’Heureux says. “I’ve given it to Him and by giving it to Him, I’m not prideful about anything, I’m not worried about anything.”

L’Heureux hadn’t seriously considered singing and acting professionally, he says, until God came to him in a vision.

“I saw all these different artists like Justin Bieber, Beyoncé, Justin Timberlake, Elvis Presley. And God reminded me that they were all Christians but a lot of them had fallen away [from the Christian faith],” L’Heureux says. “He asked me ‘Do you want to choose me or do you want to fall short?’ So I said obviously I want to choose you and he said ‘Prove it.’”

L’Heureux took this to mean that God wanted him to use his talents to his advantage.

“If we have all these talents and we don’t use them then we’re just throwing them away and that’s wasteful,” L’Heureux says.

“If we have all these talents and we don’t use them then we’re just throwing them away and that’s wasteful,” L’Heureux says.

According to L’Heureux, prayer is the most important part of staying motivated. He says his faith has brought about miracles on set. L’Heureux experienced the effects of his prayer with actor John Savage while shooting his first movie.

“John Savage was playing my guitar and then he stops playing …. he says ‘My hand hurts because I have arthritis.’ So I say ‘Can I pray for you,’” L’Heureux says. “I lay my hands on his hand and I say ‘In the name of Jesus, I cast out the pain and I thank you God for healing John.’ And then he’s like ‘I’m totally healed.’”

Whether it be praying for castmates, or confiding in God before an audition, L’Heureux keeps his religion close as he embarks on the journey to fame.

“I go in [to film] excited because I know that God has so much for me to do,” L’Heureux says. “And that’s super fun.” 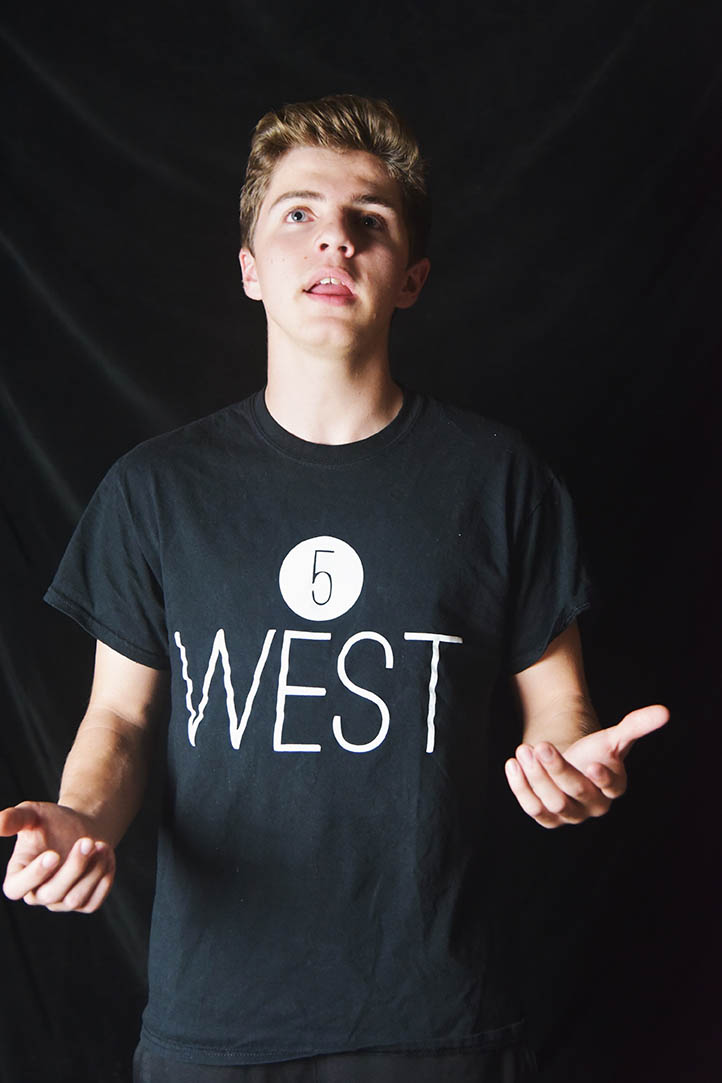 This past year, L’Heureux found an audition on Backstage,  a website which organizes auditions for everything from commercials to music groups. It was for Project Boy Band, a venture curated by music producer Bryan Todd, to create a record-releasing boy band with teens from around the country. L’Heureux drove to Los Angeles for his audition and was to become a member of 5West, along with four other teens.

In just three meetings, 5West recorded a single called “Pieces” which was released on March 9th. 5West started recording an album using studios in both Nashville and Los Angeles, and look forward to going on tour after finishing their record.

5West will also be featured in a reality TV show following the journey of the band, which has yet to finalize its production.

“It’s not meant to be scripted,” L’Heureux says. “People get to be a part of our lives and a part of seeing a boy band from start to success.”

From acting in school musicals to starring in movies to becoming a member of a boy band, L’Heureux has allowed his devotion to the performing arts to turn a hobby into a career. He’s learned to use faith and to find enjoyment in acting and singing because only then can his dreams become realities.

“If you love it, put time and effort,” L’Heureux says. “And with God, everything is possible.”   v