“If you watch the news and don’t like it, then this is your counter program to the news,” political funny-man Jon Stewart said about “The Daily Show with Jon Stewart” on Comedy Central. Although political comedy may not be new, in recent years, political satirists such as Stewart and Stephan Colbert have become superstars, harnessing the capabilities of television and the Internet to get their points across in the funniest and most interesting ways possible.

Both men have brought a lighter side to politics and news, engaging huge audiences of Americans with their  wit and social commentary.   However, some people worry it is not beneficial to the young people in this country for comedians to have so much power.

“The Daily Show with Jon Stewart” and “The Colbert Report” are two of the most viewed shows on television. Last year, “The Daily Show” finished in the Nielson TV Ratings as the No. 1 late night talk show across several demographics of TV viewers.

The shows have also enjoyed critical acclaim. Stewart has won 16 Emmys, and Colbert has won five. Although at heart the shows are just comedy routines written the day the episode airs, they have gained massive influence.
Both comedians  are playing a growing role in relaying news and politics to the public, and stealing audiences from bona fide news broadcasters like CNN, NBC and ABC. In 2009, Stewart was voted in a Time Magazine poll to be the most trusted newsman in America. Although the poll is widely believed to have been rigged, it did show that he was gaining an edge on other newsmen and newswomen.

These politically liberal Comedy Central shows also have an edge on conservative broadcasting. In May 2011, the Nielson TV Ratings showed that Jon Stewart beat Fox News in nightly viewership, averaging 2.3 million viewers to Fox’s 1.8 million viewers. Although Colbert’s viewership is not quite as massive, he still has 1.5 million nightly viewers, according to the Chicago Tribune. 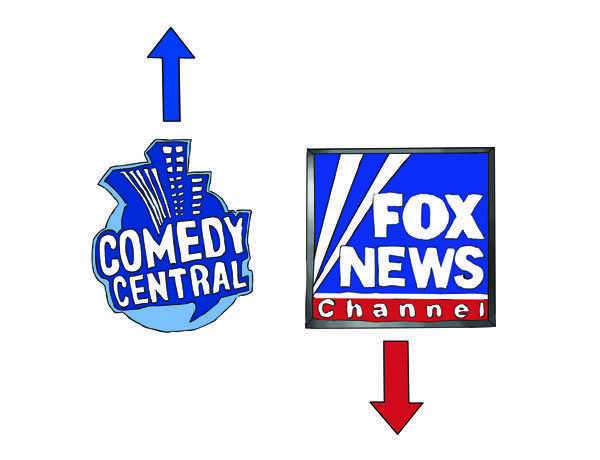 Comedy Central’s viewership is up, while Fox News is constantly criticized.

Time Magazine has ranked both Stewart and Colbert as some of the most influential people in the world, and both have made the “Top 100” list. This begs the question: is it such a good thing for them to have so much influence with a presidential election just around the corner?

“I think that even though they are ‘fake’ news programs, they still have a real influence in people’s ideas,” Paly sophomore Alex Murray says.

The two men are a comedic force to be reckoned with. Any government official or political figure that has slipped up since Stewart took over “The Daily Show” in 1999 or Colbert started the Colbert Report in 2006 can attest to this.

“There is definitely bad publicity,” Attorney General Donald B. Verrilli Jr. said when he delivered his commencement address at Columbia Law School on May 17, after his garbled argument in the health care debates earlier this year was talk show fodder. “Being on the wrong end of a Jon Stewart monologue is bad publicity.”

“The guy on the government side [Verilli] is twisting himself into pretzels to find a way to pay for the previously uninsured 40 million people who get emergency room care but can’t pay for it,” Stewart said of the Verilli’s struggle to fight for people’s right to health care.

Many people even admit that shows like these are their main source of news. A poll done by the Pew Research Institute in 2009 shows that 21 percent of people 18 to 29 said “The Daily Show” and “Saturday Night Live” were where they got their news. In comparison, 23 percent got their news from ABC, CBS or NBC.

Comedy shows have nearly the same viewership as actual news. What makes this interesting is that Stewart’s show, as well as Colbert’s, seems to have a fairly strong liberal bias.  Despite this, both entertainers say that they try not to take political sides.

“Left, right, they’re all idiots,” Stewart once said, according to Hollowverse.com, a website devoted to revealing the political and religious views and affiliations of influential people. Junior Rajiv Vasudaven agrees.

“Both entertainers seem mostly bipartisan in their opinions, and do not seem to want to convert anyone from one party to another,” he adds.

However, Vasudaven is well informed on the news. As the 2009 Pew poll shows, many members of the younger generations are not. Viewers of the two Comedy Central shows might not take into account the liberal bias in the stories, and their views may be affected.

Most people are reading less, but spending more time on social networks, which are now starting to integrate news delivery. People are becoming more enveloped in their own personal social lives and losing touch with the outside world.

Mark Bauerlein, an English professor at Emory University, wrote a book called “The Dumbest Generation: How the Digital Age Stupefies Young Americans and Jeopardizes Our Future.” He talks about how technology is affecting the younger generations in an interview with the Washington Times.

“It used to be that when teens went home, social life ended, save for the landline.  Now, social life goes on in all spaces, including the private home, and it can happen at any hour,” Bauerlain says. “This gives kids no reprieve from the tribal dynamics of high school.”

Additionally, a lot of young people are caring less and less about things that do not directly influence them, such as international news. The media is not improving the situation. The availability of news is almost overwhelming.
News’ abundance should help provide different perspectives and ideas, but what it is doing is watering down the power of a headline. With such an overwhelming flow of information on the Internet, it is easier to just take a headline or a statement and believe it as the absolute truth.

The appeal of Stewart and Colbert to many Americans is that they are entertaining and informative. It requires no effort to get your news from a comedy show that lasts barely over 20 minutes, an attractive prospect to busy people. But it is leaving people under-educated on current events.

“People have stopped thinking for themselves, and are letting others think for them,” Paly US Government teacher Grant Blackburn says. “People are now given just enough information to be dangerous.”

Even people on the shows’ staffs realize this is becoming a problem. One of Stewart’s correspondents, John Oliver, who has been with the show since 2006, spoke on this issue in a video on “The Daily Show’s” influence.

“I have no influence as a comedian,” Oliver says. “People do not watch ‘The Daily Show’ for news. I realize that is something people love to say, but that cannot be true. If it is true, this country is in real trouble.”

The point he makes is especially true now, as we will be electing a new president in just over a month. As both shows, especially “The Daily Show,” constantly ridicule Mitt Romney, the opinions of voters who watch the shows may be unfairly swayed. This election has not been an easy one for the Republicans. Political comedy could affect who is elected to the presidency.

With Stewart being one of the most trusted names in news, and Colbert following in his footsteps, the two have a lot of power over the public. They must be careful with their influence. Most likely, they will make a joke out of it.