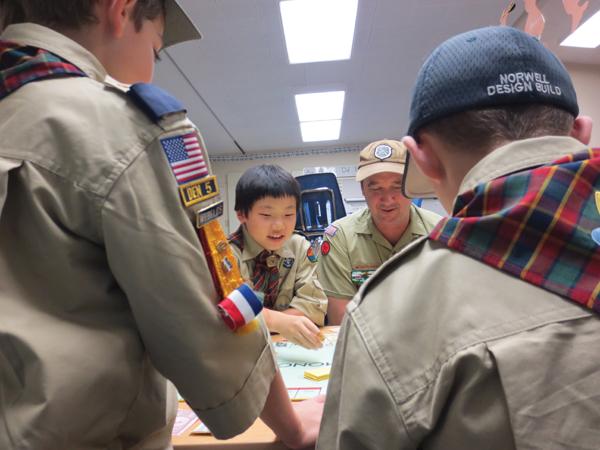 Pack 6 Cub Scout Akitoshi Kuramochi and Pack 6 parent, Eagle Scout and Palo Alto High School Teacher Eric Bloom play a board game at a Pack 6 meeting while other parents look over the resolution. The resolution, drafted primarily by Bloom, makes clear Pack 6 does not share the Boy Scouts of America’s membership policy that bars “open and avowed homosexuals” from joining the organization.

The year is 2007. Palo Alto Boy Scout Jeremy, whose name has been changed to protect his identity, is about to receive the highest honor a Boy Scout can get and become an Eagle Scout. But beneath his uniform, Jeremy wears something that to the national Boy Scouts of America council is almost more scandalous than wearing no uniform at all.

“I was wearing a shirt that said ‘Gay? Fine by me.’ underneath my Scout uniform,” recalls Jeremy, who is a gay LGBT rights activist. “The irony of it made me laugh a couple of times during the [Eagle] Board [Review].”

This irony refers to the BSA’s anti-gay membership policy, which bars “open and avowed homosexuals” from joining the organization. The policy allowed the BSA to deny openly gay Moraga, Calif. teen Ryan Andresen his Eagle Scout award and expel him from the organization earlier this October even though he had earned all the necessary badges and completed his final project. According to NBC News, Andresen was expelled from his troop both for not meeting “Scouting’s membership standard on sexual orientation” and  for  refusing to proclaim a “duty to God.”

To Jeremy, the policy belies a hypocrisy inherent with the BSA.

“The national policy goes against the values that the BSA claims they teach,” Jeremy says. “It holds Scouts to a double standard, where gay Scouts are told they have to lie about their identity if they want to be welcomed. At the same time, instead of teaching straight scouts about loyalty, friendliness, kindness and several other values of the Scout Law, it teaches prejudice and disrespect.”

For many parents and leaders of Palo Alto Cub Scout Pack 6, this is an incongruence they can no longer ignore.

“How can you meet these rules and discriminate at the same time?” asks Eric Bloom, a Pack 6 parent, Palo Alto High School Social Studies teacher and Eagle Scout. “They have a lot of rules that say what we’re trying to do is raise morally strong men. I’ll do my best… to keep myself physically fit and morally straight. But morally straight is not straight sexually, but it is that I will be a moral person as what my society says a moral person is and I think you can be moral and homosexual.”

Unable to reconcile his beliefs with the BSA’s policy, Bloom, along with similar-minded parents and leaders of Pack 6, drafted a resolution earlier this November condemning the national BSA’s handling of the Ryan Andresen case and asking the BSA to reject its policy.

“My goal was to force them to acknowledge that they have some obligations to us,” Bloom says. “Our troop should be able to have the rules that we think are valuable and important in raising boys to be moral and strong leaders in our communities. That includes not discriminating based on sexuality.”

The resolution will be sent to the local Pacific Skyline Council, which administers the Boy Scouts program for the San Francisco Peninsula, by Dec. 7 and aims to make clear Pack 6 does not share the national anti-gay policy.

“One of the biggest concerns of parents in the pack is that there are plenty of kids in Palo Alto whose parents will not sign them up for Scouting because it’s an intolerant organization and Palo Alto parents don’t buy into those values,” says Evan Lurie, a Pack 6 Webelos II Den Leader. “A big motivation for many of the parents in the pack to take this stand is to trumpet that there’s distance between national policy and how we practice Scouting here in Palo Alto.”

Although only the parents of Pack 6 have discussed the resolution so far, Lurie says the kids could join the conversation.

“One of the other components we talked about was taking the issue to the kids directly, asking them what they think about it, maybe asking if they want to draft the resolution themselves,” Lurie says. “A lot of these kids are accustomed to communal problem solving and many of them are in conversations with their parents and very disturbed that they are participating in an organization that is discriminatory.”

Pack 6 Cub Scout Akitoshi Kuramochi, 10, is one such kid. He says the right to be a Boy Scout should be open to anyone, regardless of sexual orientation.

Dissent Within the Pack

Although a majority of the pack’s parents signed on to the resolution, not everyone agrees with the resolution’s goals. As a result, the resolution will be adopted by individual parents rather than by the pack.

This is not the only disagreement within the pack.

Former Pack 6 parent Allen Bush withdrew from the pack even before the initial drafting of the resolution because he did not agree with the BSA’s policy.

“The inability of scouting to separate the things that are still beneficial about scouting with other values that should be left in the home was too much for me to personally set aside,” Bush says.

Although he agrees with the sentiments of those behind the resolution and would not hesitate to help them spread the word, he disagrees with their approach.

Bush thinks a better solution would be to secede and regroup under a more accepting organization.

“What will really cause change is when people drop out altogether and reform under a different organization that wants to fulfill the character-building and skill-building aspects of Scouts but do it in a way that anyone can participate,” Bush says.

But Lurie believes the only way to effect change is to do so within Scouting.

“I think fundamentally you can’t right the wrong,” Lurie says. “The wrong is the thickheadedness, the daftness of this policy. And so you have to change the policy. And I don’t think you do that from the outside It has to happen from within.”

But for Garth Pickett, Lay President of the Pacific Skyline Council, this is less of an injustice and more of a misunderstanding.

“Status [of sexual orientation] is not an issue,” Pickett says. “It only becomes an issue if they bring it into Scouting.”

According to Deron Smith, director of public relations for the national BSA, the organization’s policy regarding homosexuality is as follows:

“While the BSA does not proactively inquire about the sexual orientation of employees, volunteers or members, we do not grant membership to individuals who are open or avowed homosexuals or who engage in behavior that would become a distraction to the mission of the BSA.”

Smith did not elaborate on the policy’s wording in an interview with Verde.

“A Scout can come out and say he’s gay, but he can’t say ‘I’m gay, I’m part of the gay club at school,’ and take over the meeting and do a presentation on gay rights,” Pickett says.

But Lurie says this is not the case.

“I’m grateful for community leaders like Garth [Pickett] who willingly give their time to a great cause,” Lurie says. “But Garth’s take on national policy is either savvy or a stretch, and likely both.”

Smith stresses the focus on “distracting behavior” in enacting the policy.

“Any member may be removed if they introduce inappropriate topics or behavior to Scouting activities,” Smith says.

Smith says the policy exists because the issue of homosexuality is incongruent with Scouting’s goals.

“The BSA recently decided to maintain its membership policy after a two year long evaluation,” Smith says. “The BSA’s evaluation… informed us that parents of youth we serve do not put their children — most of whom are under 12 years of age — in Scouting to address the issue of same-sex attraction in any way.”

But Bloom thinks there is more to the issue.

“My bias is it has to do with a conservative Christian view because progressive Christians have figured out a way to open their hearts and their churches,” Bloom says. “There is an age-old view that people believe homosexuals are more likely to be pedophiles. I don’t see this connection between being gay and being a pedophile.”

Jeremy says these concerns stem from homophobia, pure and simple.

“The policy exists because of fear and insecurities towards gay people,” Jeremy says. “Fear of a gay Scoutmaster touching a Scout. Fear of gay Scouts having sex on camping trips in their tent. Fear of finding out that gay Scouts are no different than straight Scouts. The same insecurities that lead to homophobia in any setting contribute to the institutionalized homophobia in Scouting.”

But Smith says abuse is not a concern.

“The BSA makes no connection between the sexual abuse, or victimization of a child, and homosexuality,” Smith says.

According to Lurie, the BSA worries the acceptance of gays into the organization will alienate the conservative churches who act as chartering organizations for Boy Scout troops and Cub Scout packs.

“The biggest support for the policy stems from roughly three-quarters of all chartering organizations being churches,” Lurie says. “And a substantial fraction, not all, churches are inimical to homosexuality. So the national BSA is fearful of alienating a strong part of their base.”

Bush fears Pack 6 will be dechartered for speaking out.

“They know that it [sending out a public letter] will put them at risk because other packs have stood up against national in the past have been dechartered,” Bush says. “They [those in national] don’t take kindly to people doing that.”

Smith says national responds to packs who do not comply with national policy.

“Any time we are made aware of an inconsistency in the administration of a Scouting policy we work to reiterate the policy and ensure its compliance with local leaders,” Smith says. “Although rare, there have been situations in the past when charters have been revoked.”

Pickett, however, says Pack 6 is in no danger of being dechartered.

“Pack 6 is not alone in their desire to change national policy,” Pickett says. “We respect that, honor that and do not in any way want to get rid of that. We’re not going to decharter them because they want to pass a resolution wanting to change policy.”

The big question now is how far the parents of Pack 6 are willing to go.

“Those next steps really are a wait and see,” Bloom says. “There’s a little division among the grown-ups about how much trouble do we want to make. First, how much trouble do I want to make for myself that I’m working full-time and I have two kid. Second, is this my battle to fight? And then there’s others of us who are like if it’s not our battle, whose battle is it?”

Bloom says the battle is the hardest for gay Boy Scouts.

“Don’t do anything differently,” Lurie says. “Take pride in who you are. Don’t veil it. And know there is a growing body of Scouts who think you can reflect the best in Scouting and you don’t need to change.”

As unlikely as it is for the time being, Bloom says this growing body could result in change.

“That’s what Scouting needs to do,” Bloom says. “We need to have a referendum.

“Let’s have all the troops, all the packs come forward and say how are we going to stand on this? It’s no longer this issue that you get to decide for us and we just toady along.”