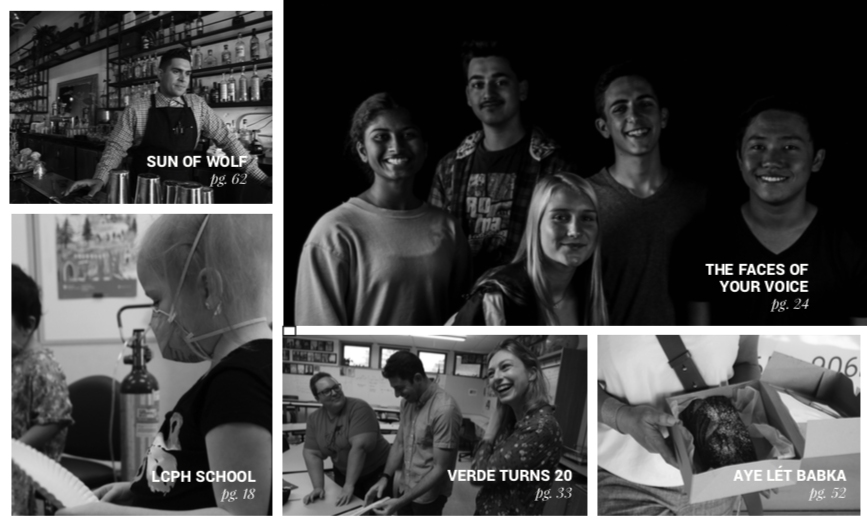 From the editors: Ruminations and reflections

“Your methods have to match the goals.”

However, balancing motives and effects transcends the seclusion of the Santa Cruz Mountains. Whether it be writing college applica- tions or preparing for the Nov. 6 midterm elections, we routinely con- template our beliefs. For the civically-engaged and politically-minded, staff writers Devony Hof and Warren Wagner detail the various planks of candidates in our voter guide.

But reflection is more than mere contemplation — we must en- sure our values are mirrored in our actions. As Verde embarks on our 20th volume, we look back on how we’ve adhered to our founding mission: to capture the untold stories of our community. In “Verde Hits 20,” staff writers Riya Matta, Gila Winefeld and Prahalad Mitra recall some of our most hard-hitting stories, from “You Can’t Tell Me I Wasn’t Raped” to “Interned” to the most recent, “Up in Arms.”

progress and amusement in “The Gila Games.” What if, instead of producing more Flappy Bird and Temple Run, entertainment titans instead worked towards societal betterment, and studied cancer or op- timized renewable energy?

Online, news editor Emma Donelly-Higgins covers the Palo Alto Weekly’s school board candidate forum and its highlights. As a digital extension to our “Crazy Rich Asians” review, social media manager Jasmine Venet livestreamed a Sept. 28 panel with the book’s author, Kevin Kwan, where he weighs in on the story’s newfound success and its advocacy for Asian-American representation.

Ultimately, whatever the medium or facet of life, whether it be hitting the polls, indulging in a Spike Lee film, or evaluating the bus- tle of Silicon Valley, pause for a moment of introspection. Challenge, reshape and reaffirm your values — and then go forth with gusto.