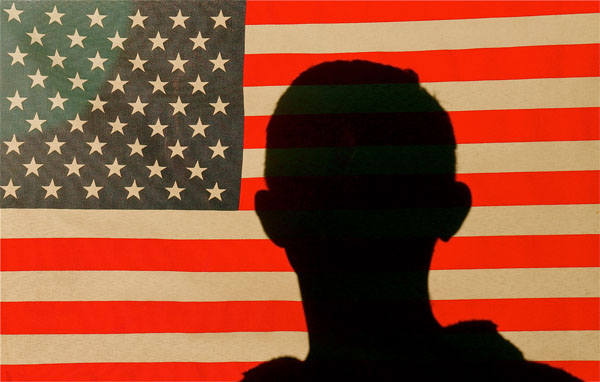 Left, Right and In Between

Is today’s patriot but a shadow of his former self?

SEVENTY NINE YEAR-OLD HARRIET PALMER, A LOCAL VOLUNTEER FOR THE OBAMA CAMPAIGN PASSES OUT POLITICAL PARAPHERNALIA TO THOSE WHO PASS BY HER DESK.

She appears rejuvenated by every new arrival at the Menlo Park Democratic convention, where she volunteers. Palmer is the physical embodiment of a patriotism that is both new and old, seated behind the sticker-covered, surrounded by bouquets of balloons in the archetypal red, white and blue and peering out at her America from behind her wire-rimmed glasses.

“I’ve always been in politics,” Palmer says, as if she ran a similar reception desk at the arrival of the Mayflower and has watched politics evolve ever since. She hands out nametags as she professes her love for her country.

“This is the greatest country in the world,” Palmer says, “My passport when I was growing up was an important thing for me. I’m fortunate because I’m here but that also gives me responsibility. That’s what patriotism means to me, owning up to our responsibility as a country.”

The true meaning of patriotism has long been the center of a vehement debate. Maybe this need to identify ourselves based on love for our country is the reason that we defend the objects that symbolize America so desperately, draping flags and thematic balloons over reception tables, flagpoles and infomercials. Maybe this need to qualify patriotism is why Palmer punctuates her definition of it with the claim that “Romney doesn’t recognize his universal responsibility, our universal responsibility” as a country who has considered itself a universal paradigm since independence. Damon Linker, in his article, “Calvin and American Exceptionalism,” traces this overconfidence as the seed of American patriotism.

“[There was a] profound impact of Calvinist assumptions on the formation of American patriotism — and in particular the country’s sense of itself as an exceptional nation empowered by providence to bring democracy, liberty and Christian redemption to the world,” Linker says.

Linker cites this religious elitism as the feature of American patriotism that sets us apart from other countries.

“It is this persistent theological self-confidence that distinguishes American patriotism from expressions of communal feeling in any other modern nation,” Linker says.

“Democrats believe that government has the responsibility to create a playing field where people in need of aid recieve it by law,” Kerman says. “Conservatives believe that this aid should not come through the government, but rather by way of strong community values and private charity.” The claim evokes somewhat more of a “Bleeding Heart Conservatism” than Romney’s recent “47 percent” remarks in his reaction to patriotism that is at once firmly based in capitalism, and socially conscious. Palmer and Kerman stand for the two types of patriotism that drive the ever-uglier political campaigns in our country and constant speculations that each election will be the one that defines America for our generation.

“I would say that mainly Democratic ideals are what I believe in,” Palmer says, reaching across her table and gesturing at flyers printed with Obama slogans. Palmer’s sparsely ringed hand passes over last election’s dictum, “Yes we can,” as if subconsciously affirming the statement that her patriotism and ideology cannot be split, and that our country’s greatness lies in that eternal promise. “It’s important [for patriots] to have a belief.”

Lisa Altieri, Palmer’s colleague and the regional field organizer of the Obama campaign, agrees with Palmer’s partisan take on patriotism.

“Right now, we’re at a crossroads,” Altieri says. “Either people will understand what’s going on or they will believe what they [the Republican party] are saying and we’ll lose everything.” Altieri interposes her rejection of a legitimate right-wing patriotism with a bite into her sandwich.

“The idea that you can have a partisan attitude is very much part of our political culture and we’ve internalized that,” Jack Rakove, Pulitzer Prize-winning Stanford professor of history says.

This is a split that is becoming more and more pronounced as we are bombarded on Facebook by the posts of our pseudo-pundit peers and on television interviews by their lobbying adult counterparts. The student population has taken it upon themselves to declare their political orientation over social media platforms in dispute over which patriotism is more correct, whose love for America greater.

“I think there’s an asymmetry — Republicans who, generally speaking, represent old-stock Americans and Democrats who have become the much more multiracial party, much more the party of immigrants,” Rakove says. This asymmetry has existed since Anglo-American times, when Hamiltonian and Jeffersonian ideologies gave birth to the party-specific strands of patriotism that we see in politics today.

Even apart from the most dramatic right-wing factions like the Tea Party, the Republican Party in general defines patriotism in terms of America’s beginnings. According to Rakove, “their platform has been advertised in Hamiltonian vernacular, condemning all traces of “socialism” and the left as “more interested in national norms than American interests.”

“He [Obama] takes his political inspiration from the socialist Democrats in Europe,” says Romney in Fox’s GOP debate on Sept 22. “I believe in free enterprise and capitalism. I believe government is too big.”

“The way symbols [of patriotism] operate between the parties is what is significant,” Rakove says on the true meaning of partisanship in American patriotism. Rakove’s claim hints at a patriotism that is shared between the two.

Contrary to their competitors, the left campaigns in terms of the promise that America can improve on itself (Obama’s former “Yes we can” immediately comes to mind).

“What makes America great is not its perfection, but the belief that it can be made better,”  President Barack Obama said in a 2008 speech in aptly-named Independence, Missouri. Obama qualifies American exceptionalism by relating it to humanity, not the individual, connoting that as a country, America has much to realize and the potential to do so.

“Patriotism for me is a belief in true democracy,” Altieri says. “People all over the world really want what we have here in terms of opportunity for equality.”

According to Christopher Morriss’s Time Magazine  article, “The New Patriotism,” the left designates social characteristics to the equality that Altieri talks about. The left campaigns for an  America where all races, creeds and sexual orientations will be afforded the same privileges and fiscal opportunities, using Romney’s lack of Obama’s rags-to-riches appeal to downplay his understanding of the common American.

Peter Rockhold, Paly graduate class of 2012,  and one of few Paly students who take on the responsibility of patriotism by planning to join the Navy defines patriotism as independent of party division. His views are his alone, and do not necessarily mirror those of the US Navy.

“What really defines America [and our national identity] is our documents: the Declaration, the Constitution, these are true American ideas and values,” Rockhold says.

According to Rakove, true American patriotism is rooted in something much deeper than the party division that he calls “a false dichotomy” in American politics.

“The American Patriot is loyal to the Constitution of the United States of America,” Rockhold says. “For a long time, sailors of the US Navy have been taught the constitutional paradigm. Politics is where the lines blur between patriotism, greed and jingoism.”

These politics dictate the different operations of symbolism between the parties; these politics that inspire us to defend our ideology so aggressively by flag-waving and chest thumping.

Kerman agrees with Rockhold and Rakove, claiming that partisanship is nullified by patriots’ common loyalties to the great American documents, and that patriotism is pride in the principles that make up America, and what we stand for as a nation.

According to Kerman, it is our Constitutional ideals that define true American patriotism at its core, that dictates the goals we are fighting over on televised debates, during Occupy protests and in virtually every expression of love for our country. Perhaps it is this universally applicable strain of patriotism that inspires Palmer to recognize the American community in saying, “No man is an island, we’re [as Americans] all part of a whole,” Palmer says as she reclines away from her desk and peers up at the balloon bouquets with new meaning. Perhaps it is this patriotism that we adorn with our flags and Fourth of July napkins.

According to Rakove, “The fact that we continue to argue about our ideals; what kind of equality we favor, what kind of social norms are we comfortable with, is what defines American citizenship, a virtue so bound up with who we are as people.”