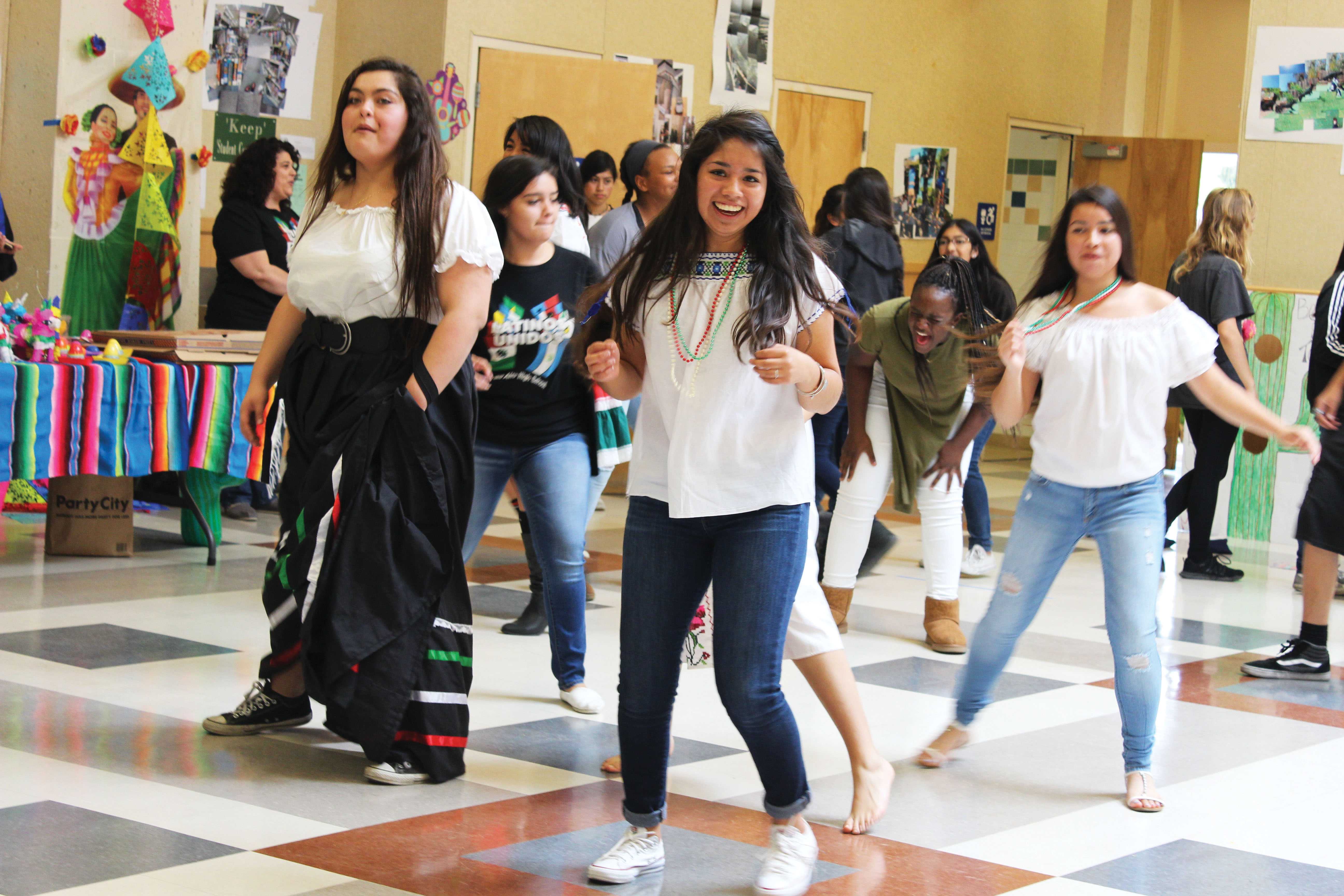 Dressed in colorfully embroidered dresses, a group of Latinos Unidos club members executes a traditional Mexican dance in time with lively Latin music bouncing through the student center. They move in unison from side to side, their faces beaming and their necklaces swaying. As the festivities continue, various Palo Alto High School students observe the dance and, between giggles, spin a wheel to win prizes. When the song ends, the group of club members disperses into the crowd and students begin circling an array of dishes served across the long tables, the smell of cinnamon coated churros attracting them to the stands.

Cinco de Mayo is one of various Latin American holidays the club celebrates, along with Dia de los Muertos, or the Day of the Dead, and, starting this year, a Cesar Chavez march. Latin American is a term used to describe any country south of the United States that speaks Spanish, French or Portuguese. Although relatively small, with 15 members, the club continues to be a successful source of student initiative. As the club grows and expands its events, the members say they hope to increase awareness of Latino culture at Paly.

“Our goal is to learn and experience Latino culture, as well as share it with the Paly community through the events that we do,” says Latinos Unidos club president and Paly senior Diana Rodriguez.

According to Rodriguez, the club’s events expose the Paly community to Latin American holidays and traditions, an important task given that Paly is less than 10 percent Latino, according to the Western Association of Schools and Colleges’s report on Paly. In club member and senior Peter Valbuena’s case, he joined the club even though he is not Latino.

“I think the club helps to expose the Paly community to the Hispanic population’s traditions and to get rid of stereotypes and misperceptions about Latinos. … We hope to get more people in the club to keep eliminating these misperceptions.”
– senior Peter Valbuena

“I have a lot of Hispanic friends and I wanted to learn more about the culture,” Valbuena says. “I think the club helps to expose the Paly community to the Hispanic population’s traditions and to get rid of stereotypes and misperceptions about Latinos. … We hope to get more people in the club to keep eliminating these misperceptions.”

For those in the club who are Latinos, the meetings also serve the purpose of connecting with others and learning about their heritage, according to senior club member Cristal Ortiz Valencia.

“There are so few Latinos at Paly, it’s kinda just a nice little culture that we’re together,” Valencia says. “Here [at Paly] it’s really hard to find things that are in common with others so you kind of just have a community where you can talk to each other and understand one another. I think that’s the best thing about Latinos Unidos.”