Judge persky should be removed from the bench 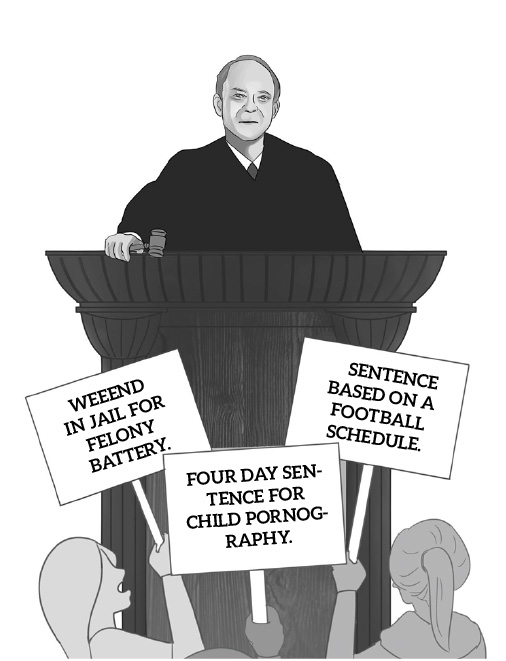 Since the uproar of the Brock Turner case in June 2016, critics have called for Judge Aaron Persky’s removal from the bench in Santa Clara’s Superior Court. Since Turner’s trial, increased awareness about sexual assault within the Palo Alto community casts a shadow upon students as the district struggles with the issue and how to emphasize the significance of consent.

Persky gave Stanford freshman Turner what was considered a light sentence for felony sexual assault. Prosecutors recommended six years while Persky granted Turner six months jail time and three years probation. Persky’s decision was an anomaly that did not adequately sentence the perpetrator for his crime, Verde supports recalling Persky because his lenient sentence did not fit the seriousness of Turner’s crime.

Persky’s recall is not important simply because his ruling went against public opinion, but because the judicial system must not unfairly protect one side of a sexual assault case at the expense of the other.

Despite prosecutor recommendations for six years in prison, after the release of Turner’s statement acknowledging the magnitude of his crimes, it is clear that Persky heavily weighed Turner’s account of events.

“I take him at his word that, subjectively, that’s his version of his events,” Persky said. “The jury, obviously, found it not to be the sequence of events.”

Persky has a long history of giving lenient sentences for higher crimes, showing a pattern of gender bias.

According to the campaign asking for Persky’s removal from the bench, Persky found a college football player guilty of domestic violence and an attack on a good samaritan in 2016. Persky gave the perpetrator a sentence that suited his football schedule and did not hold him accountable when he failed to comply with the conditions of his sentence. Persky also sentenced Tony Chiang, a Cisco Systems engineer, to one weekend in jail for felony aggravated battery against his fianceé in June 2016. Robert Chain, convicted of child pornography, received just a four-day sentence from Persky, who also offered to reduce his felony conviction to a misdemeanor for which Chain could receive one year probation in 2015.

Persky’s recall will show that we will not tolerate sexual assault or lenient rulings that are not based solely on the evidence presented in court, but could have been swayed by personal biases.

Persky’s recall will show that we will not tolerate sexual assault or lenient rulings that are not based solely on the evidence presented in court, but could have been swayed by personal biases.

Some question whether it’s advisable to recall Persky, but the danger in not removing him from the bench is that it may set a standard that allows our judicial system to not take cases of sexual assault seriously. And in doing so, we diminish the integrity of the victims.

“This [recall] isn’t about undermining a judge’s decision,” said Carrie LeRoy, a lawyer who educates students about their rights regarding sexual assault. “This is about availing ourselves of a process that is in place when judges act in the manner that he [Persky] acted.”

Stanford Law students wrote a letter that details the dangers of Persky’s recall, claiming that his removal from the bench allows judicial power to be vested in the voting public. The fear: Persky’s recall will remove judicial independence and due process.

We do not advocate removing judges who simply go against public opinion due to the dangerous precedent this would set, but we do want see penalization for those who adjudicate cases where the punishment does not reflect the gravity of the crime.

Medina Husakovik, a columnist for the Stanford Daily, wrote, “If there is not legal and social punishment for sexual abuse on all levels, from leers to rape, we are telling women that the sexual abuse of their bodies doesn’t matter, that it’s expected.”

In the last decade, college campuses have experienced a 50 percent increase in reports of sexual assault, according to the U.S. Department of Education. This data doesn’t necessarily mean that more sex crimes are occurring; instead, the increase might be reflective of an increased willingness to report assaults.

If Persky remains on the bench, victims of sexual assault may be less likely to come forward because they may feel that such minor punishments for their offender are not worth the trauma of being in the public eye.

If Persky remains on the bench, victims of sexual assault may be less likely to come forward because they may feel that such minor punishments for their offender are not worth the trauma of being in the public eye.

Campus sexual assault is complicated because of the shifts in its definitions and though schools may be setting new rules to bring awareness to sexual assault, students are following societal norms that have been around for decades.

The Office of Civil Right’s report in March 2017 addressed the Palo Alto Unified School District’s failure to follow correct procedures for sexual harassment in eight cases and raises the question: What new measures will PAUSD need to take to better handle sexual assault?

Verde agrees that solving the issue of sexual assult does not rely solely on schools and colleges, but rather the steps society as a whole is taking. One step, removing Persky from the bench, will demonstrate that sexual assault will not be condoned in our community, nor will sentences that do not accurately reflect the details of a case. A second requires conversations about sexual assault to occur, becauseopen discussion removes the stigma around the issue.

“The Brock Turner case is a part of a much larger important conversation about rape culture,” LeRoy said. “[We] need to look at the system that supports the judicial one. … We need to tear down essentially everything that props up a rape culture.”   v