Palo Alto High School will host a grand opening weekend for the Media Arts Center on Oct. 16, 17 and 18 to celebrate the completion of the new building, featuring guest appearances from James Franco, graduating class of 1996, and Arianna Huffington.

According to journalism teacher Esther Wojcicki, the week’s first event will begin at 5:30 p.m. on Thursday Oct. 16 with speeches by Ariana Huffington, president and editor-in-Chief of the Huffington Post; David Kelley, head of Design School at Stanford; and Shelby Cofey, vice chairman of the Newseum.

This opening event is invitation-only, and took only three days for the event to nearly fill up, according to Wojcicki.

The second night will feature an open house that everyone is invited to attend.

The third night will feature James Franco, who will present a new movie and artwork.

This event will is $5 for Paly students and $20 for anyone else who wishes to attend. Tickets are available here.

“The food [that will] be served [on the third night] is going to be Campanile-famous food — pizza,” Wojcicki said. “I thought it should be a recreation since James Franco was in the Campanile. He thinks that [the Paly journalism] program has had the greatest impact on his life, so he’s coming back to celebrate. … The drama program at Paly also had a big impact on his life, and so he feels very connected to Paly, so that’s why he’s coming back.” 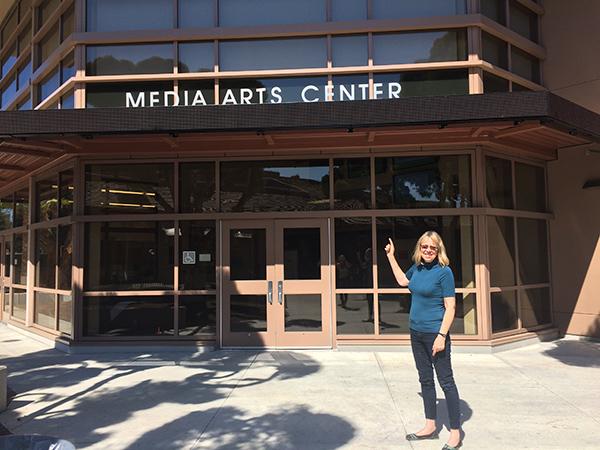 Esther Wojcicki poses outside of the Paly Media Arts Center, where this weekend’s events will take place.