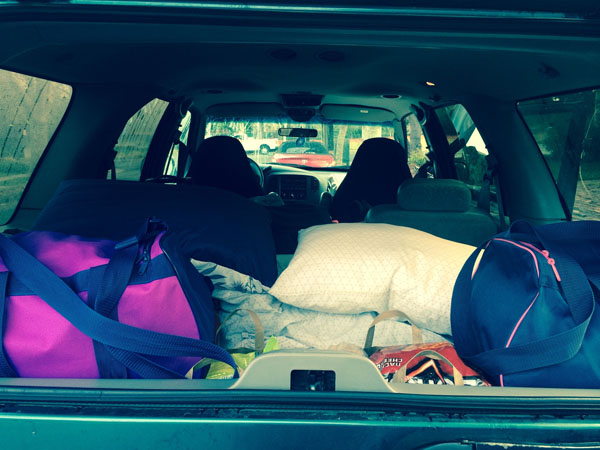 Christie and Jane currently reside in this vehicle. With Palo Alto’s vehicle dwelling ban up in the air, this may soon change.

IT’S SUNDAY EVENING IN THE GLASS SLIPPER INN, and Christie and her mother are fighting over dinner. Christie, whose name has been changed to protect her identity, has accidentally placed an extra order online from a catering service. She hasn’t bought the meal, and yet the tension in the room between the two erupts. It’s not a fight worth anyone’s time, but Christie and her mother can’t help it — it’s Sunday evening, the beginning of the last week they get to stay in the Inn. Afterwards, it’s back to living in their vehicle.

With only one emergency shelter and few affordable housing programs, the City fails to accommodate the significant problem beneath its affluent facade. The citizens of Palo Alto have also voted against Measure D, which would have provided an affordable housing building for seniors.

Although Palo Alto’s Opportunity Center and other affordable housing venues all offer supportive, long-term housing for families and single persons, it fosters a lack of initiative within the unhoused community. As a result, during a time where the housing market continues to spike while people are trying to recover from an economic downturn,  the unhoused population is rising at an alarming rate while all the shelters remain full.

The majority of the unhoused in Palo Alto are resigned to the long-term housing the city provides, which causes the circulation of unhoused individuals to remain stagnant, affecting those who are seeking to better their circumstances. Meanwhile, by moving out of the shelter system, they’re providing a space for those looking to become productive members of the society by getting a degree at Community College, helping themselves beyond welfare and finishing their time here at Palo Alto High School.

A student at Palo Alto High School, Christie stops by coffee shops to study for tests, interns at a seafood restaurant and aspires to major in culinary studies, possibly with a minor in business. Nobody would notice her situation if she and her mother walked on the street, but the two are currently homeless.

When their nomadic commutes from church sanctuaries to hotel rooms paid with donated hotel points don’t work out, Christie and her mother reside in their vehicle since all of the shelters in Palo Alto are currently full.

It all began in June 2012, when Christie’s mother was laid off from her job as an accountant. With Christie’s father providing little for Christie’s child support, her mother relied heavily on her meager salary  to compensate for the rest. Before she knew it, the family was a few months behind on the rent.

“We got a three-day notice to pay the rent or be evicted from our apartment,” Christie says. “My mother called shelters, but all we managed to do was get on a few waiting lists. My mom managed to stall the eviction process for a couple of months so that we could get a vehicle—something warm.”

It turned out that the residential supervisor of the apartment mishandled the eviction protocol. While Christie and her mother could have made an appeal and forced the apartment to start the eviction process over, they preferred to take the initiative rather than take advantage of the people who owned the building.

“It would essentially be like living off of someone’s back,” says Christie’s mother. “ I didn’t want to do that — I’d much rather just leave once we could.”

While Christie’s situation is disheartening, she finds hope in her future plans. After graduating high school, she and her mother plan to move down to Solvang.

“I’m getting a degree, working part time,” says Christie’s mother Jane. “I’m making sure my daughter’s going school everyday. She’s graduating a year early, and, she has an internship. We have a plan, and it’s not to live in the car for the rest of our lives.”

For now, Christie remains tethered in Palo Alto until she finishes up school. Palo Alto, in the meantime, continues to create obstacles for Christie and her mother. With no permanent place to stay aside from their car, the family might be left with no home at all. After all, the city has been debating whether to enforce a vehicle dwelling ban that was enacted August 6, 2013.

“Living in a vehicle. …It’s legal now since the enforcement of the ban is suspended,” Christie says. “But if it does happen…I don’t know. Hopefully by then we’ll have something.”

While Christie dreams of moving down to Solvang, Christie’s mother Jane works to make that dream tangible.

Jane was born in Palo Alto and started working when she was seven, helping her uncle file papers and organize books. At 15, she started working full time, making it hard for her to get a degree.

“With the way the economy is, everybody wants a degree now,” Jane says. “They don’t even care about the experience that I have, which is over 25 years of accounting experience. They want the piece of paper. …It’s frustrating since jobs I look at online—they ask for a top-tier school, 3.5 or better [G.P.A.], Bachelor’s Degree job that I could do with one hand tied behind my back.”

Despite having grown up in Palo Alto, Jane feels that her hometown’s growing prosperity has ruined its atmosphere, especially for people like her. She believes that the city’s affluence has led people to overlook the fact that some people lack basic needs, like a place to stay while she gets back on her feet.

“Here, your quality of living is expected to be better, so people are more cutthroat to get that quality of living, when all you really need is a roof over your head, clothes on your back, food on the table,” Jane says. “People think that the roof over your head has to be a five-bedroom mansion. It doesn’t need to be. But because of that persona here in this area, in Silicon Valley, people will do whatever it takes to get that.”

Neighbors Helping Neighbors has emerged as another resources for families in need. The organization collaborates with Palo Alto High School, which is able to refer families to them.

The number of families who have been turning to the organization for food and shelter have been growing at sporadic numbers. The families with high-school-age students is above 30.

“Many people think that the un-housed here aren’t Palo Alto residents,” says Caryll-Lynn Taylor, the Director of Neighbors Helping Neighbors. “Don’t get me wrong, every city will have their un-housed, but the number of families is growing alarmingly because the rates of houses are increasing at ridiculous rates.”

Unlike organizations that look to provide education for low-income families or medical services, Neighbors Helping Neighbors looks to provide general immediate needs, ranging from groceries to attorneys that will defend families who have received tickets on a vehicle they might be currently living in.

“What our un-housed in Palo Alto have found is that services have been terribly inadequate for quite some time now,” Taylor says. ”It’s different here: to my knowledge, we’re the only organization who looks to provide many services at once.”

“We don’t promise them great expectations,” Taylor says. “ We will provide them a place to turn to, but we want people that will take the next step. We can help guide them, but we can’t do everything for them.”

“One of the challenges for the unhoused is that there isn’t a lot of affordable housing here in Palo Alto,” says Brenda Carrillo, the student services coordinator for PAUSD. “If families are looking for low-income housing it can be very difficult.”

Even the cheapest rent at the Opportunity Center is $399 a month. In order for someone to rent a space, he or she needs to make twice as much as the rent at the very least. This adds up to a minimum income of $9576 a year for the residents of the opportunity center.

Furthermore, Palo Alto only has one rotating emergency shelter called “Hotel de Zink,” where churches in the area take turns each month to provide food and shelter for the homeless. It only serves about 15 people a month.

With 500 people in Palo Alto unhoused and growing, Jane believes that it’s time to turn to something more practical.

“You’ve got people perfectly content with living off of social welfare,” Jane says, “That’s not fair for people like us, who want to give back to the community.”

Jane supports the funding of transitional houses, which looks to provide temporary housing for the certain segments of the homeless population, and is set up to transition their residents into permanent, affordable housing. It is not in an emergency homeless shelter, but usually a room or apartment in a residence with support services.

Tim Wong, the senior planner of Housing Development,  states that Palo Alto focuses on permanent affordable housing due to limited housing funds and the high cost of living in Palo Alto.

According to Harold G. Berkeley, the residential supervisor of Palo Alto’s Opportunity Center, the city could use more transitional housing programs to handle the growing unhoused population and cultivate initiative.

“I definitely think that we need transitional housing,” Berkeley says. “The [Opportunity Center] opened in 2007, and I think 60 percent of the people who were here in 2007 are still here. I will further justify that by saying I have a 700-person waiting list. Only around 12 units open every year.”

Carrillo describes the false perception of Palo Alto, which seems like  a perfect combination of small-town community meets urban ambiance. While it may be charming for the children of high-tech company executives, star athletes, and lawyers, Carillo says, for the unhoused, this environment can just bring more distress.

Even PAUSD currently serves four families with students that are in high school.

“I think that it’s even more difficult to be struggling with homelessness in our community because there’s so affluence here that it can feel kind of demeaning to not have a place to live,” Carrillo says.

While many like those in the Opportunity Center are resigned to their place, people like Christie and organizations like Neighbors Helping Neighbors looks to fill in the gaps that Palo Alto continues to excavate.

“[My mother’s] taught me that I am strong, that I can get through any situation,” Christie says.“It’s not always going to be like this. I’ve been in the situation three times, we always pull through. Things will get better.”