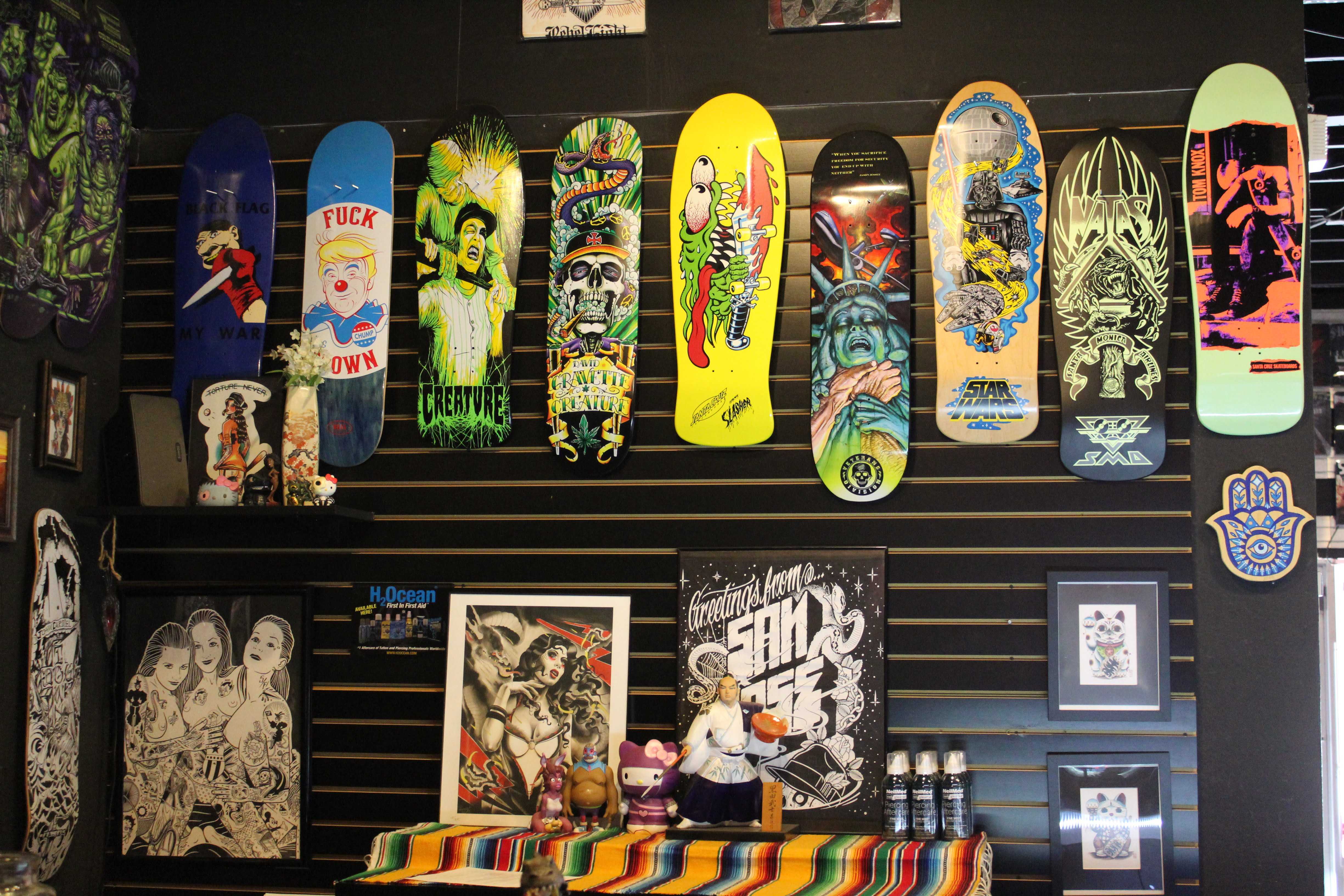 A friendly bell chimes as a young woman dressed in workout clothes strolls into Fatty Zone, a Mountain View smoke shop that doubles as a clothing store and, most famously, a piercing parlor. She walks through the main room of the store that is dedicated to retail and is organized into sections: the ‘glass gallery’ of marijuana accessories lies to the left, while artfully designed skateboard decks and low-slung glass cases of body jewelry are on display straight ahead. In a corner is a doorway, beyond which resides the space that puts Fatty Zone on the map.

She reaches Mark Herman, the Zone’s main body piercer, and explains her predicament: As she washed her face that morning, her nose stud had fallen out. At first, she was worried about the new piercing closing up, however, after visiting the Zone for an impromptu session with Herman, she was on her way with her piercing reset and her mind at ease. 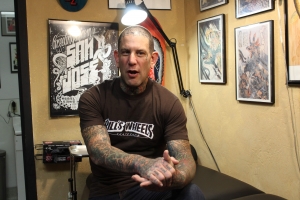 HERMAN’S HABITS Mark Herman sits where his customers do when he pierces them. He is proud of his attention to detail and high quality services, and knows that this passion is more important than any piece of jewelry. “It’s not about money, I like to come to work, I like to make people happy,” he says.

It is his problem solving, careful planning and attention to detail that has earned Herman a respected reputation throughout the Bay Area, and he is often the de facto referral for Paly students looking to get pierced.

One of these students is Palo Alto High School sophomore Alli Miller, who has several piercings including standard lobes, seconds, thirds, a cartilage and plans for more. After getting pierced at various locations like Claire’s, an accessories chain that offers ear piercing services, her own home and Fatty Zone, Miller plans to return to the Fatty Zone for any additional piercings she may get in the future.

“He [Herman] is super easy to talk to and very reassuring,” she says. “[He] takes his time and makes sure that you are comfortable, whereas at a piercing salon they tend to try and rush through as many customers as fast as they can.”

Jack of all trades

At first glance, one might be intimidated by Herman’s tall stature, tattoos and, of course, piercings. His friendliness, however, welcomes customers and quickly puts them at ease.

Although Herman has a wide variety of passions and skills ranging from medical assisting to running, he says he has always come back to piercing as both a profession and an obsession.

“I love body art,” he says. “I’m covered head-to-toe in tattoos, but I’m also a martial arts instructor, a lifelong martial artist [and] I run marathons.”

His love for piercings started when he was young. He grew up in the punk-rock community going to concerts and skating, so it isn’t surprising when Herman says piercing developed into a passion before becoming a profession. 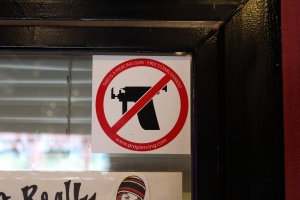 FIRST RULE OF THE ZONE A small sign reading “This is a piercing gun – free establishment” is placed high on a window in Fatty Zone. Herman pierces with a needle and a white clip to make sure the piercing is precise and lined up correctly.

“I got my tongue pierced when people weren’t doing things like that,” he says. “I remember I showed up to Santa Clara High School in 1992 or ’93 with a tongue piercing and it was like, the craziest thing ever.”

Now that piercings are  more mainstream then they were when Herman was in high school, there is more opportunity for him to make a living and financially support his son through college by doing what he loves.

“I’ve been very lucky; I’ve created a life for myself as an artist,” he says.

His friends, who are the owners of the shop, have allowed him to return despite going abroad to Europe as a touring musician for several years. Herman’s attention to detail, both in the care he takes in piercing a client and in keeping his parlor spotless, is what seems to keeps customers coming back for more, no matter how long he may be gone for.

“I’ve had such a good relationship with my clients for so many years,” Herman says. “If  I  take off for three months, the day I come back to work I’m busy— it’s like I never left.”

As he embarks on his 22nd year working at Fatty Zone, Herman explains how some of his customers have come full circle and brought their children to get pierced at the same place they did.

These long-term relationships are something special to Fatty Zone, and the reasons customers bring their children in to the store also includes his strict piercing morals.

He will sometimes even turn customers away because he knows that the piercing isn’t meant for them. 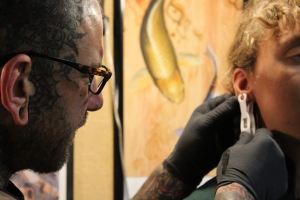 GETTING SET UP Herman cleans the lobe of Kate Milne’s ear and prepares to pierce it by placing a clip around the desired location. He uses extreme care when adjusting the planned location for the piercing as he knows the result of the jewelry can change someone’s day. “When a little kid comes in here, scared, tripping out, I pierce their ears and then all of a sudden they’re smiling,” he says.

“They [customers] show up, they bring in this picture of this ear that they took off of Pinterest, and it doesn’t look like their ear” he says. “You can either pull this off half-ass and take their money, or you can be straight up and say, ‘Hey, this isn’t your ear… This is not going to look good.’”

In comparison to the consideration Herman puts into each client’s needs at the Zone, students who have gotten their ears pierced at commercial locations often experience avoidable issues such as infection that cause frustration.

Junior Sanaz Ebrahimi says that her experience getting her ears pierced at a location known for their inexperienced piercers was tumultuous and unpleasant. She had gone in to get second piercings, another set next to the ones she already had.

“She [the piercing lady] was incapable of doing her one job because my piercings were totally off on either side,” she says. “At the end of the day I left with four holes in my ears – two of which healed closed – when all I came in for was two double piercings.”

However, his well-meaning and unfiltered professional opinions are received differently by customers.

Nevertheless, Herman knows that while money is fleeting, the legacy his work leaves behind will last, and he plans to continue to provide high quality services to those who seek them out.

“Money comes and goes,” he says, “but [not] your name and your work ethic.” 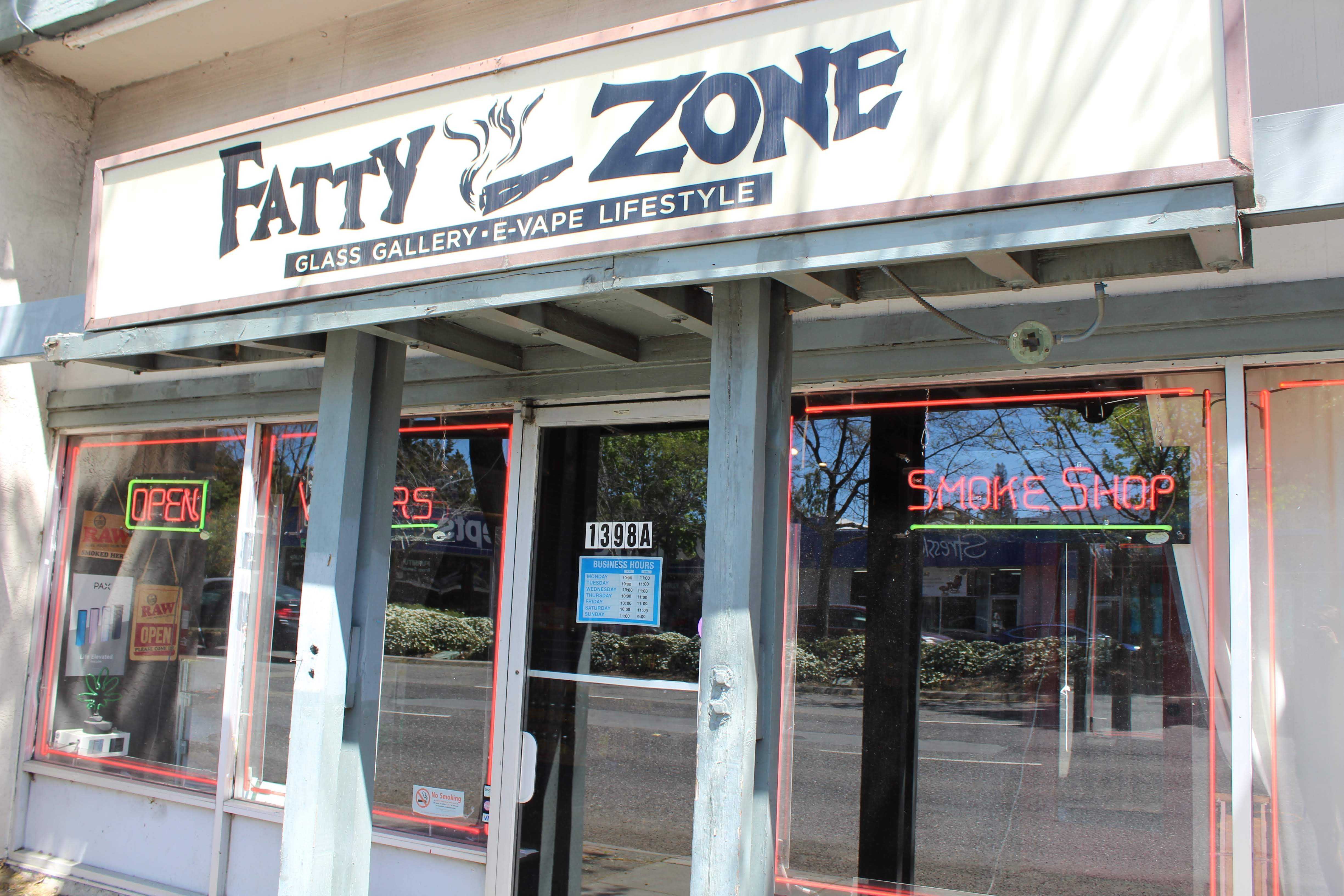 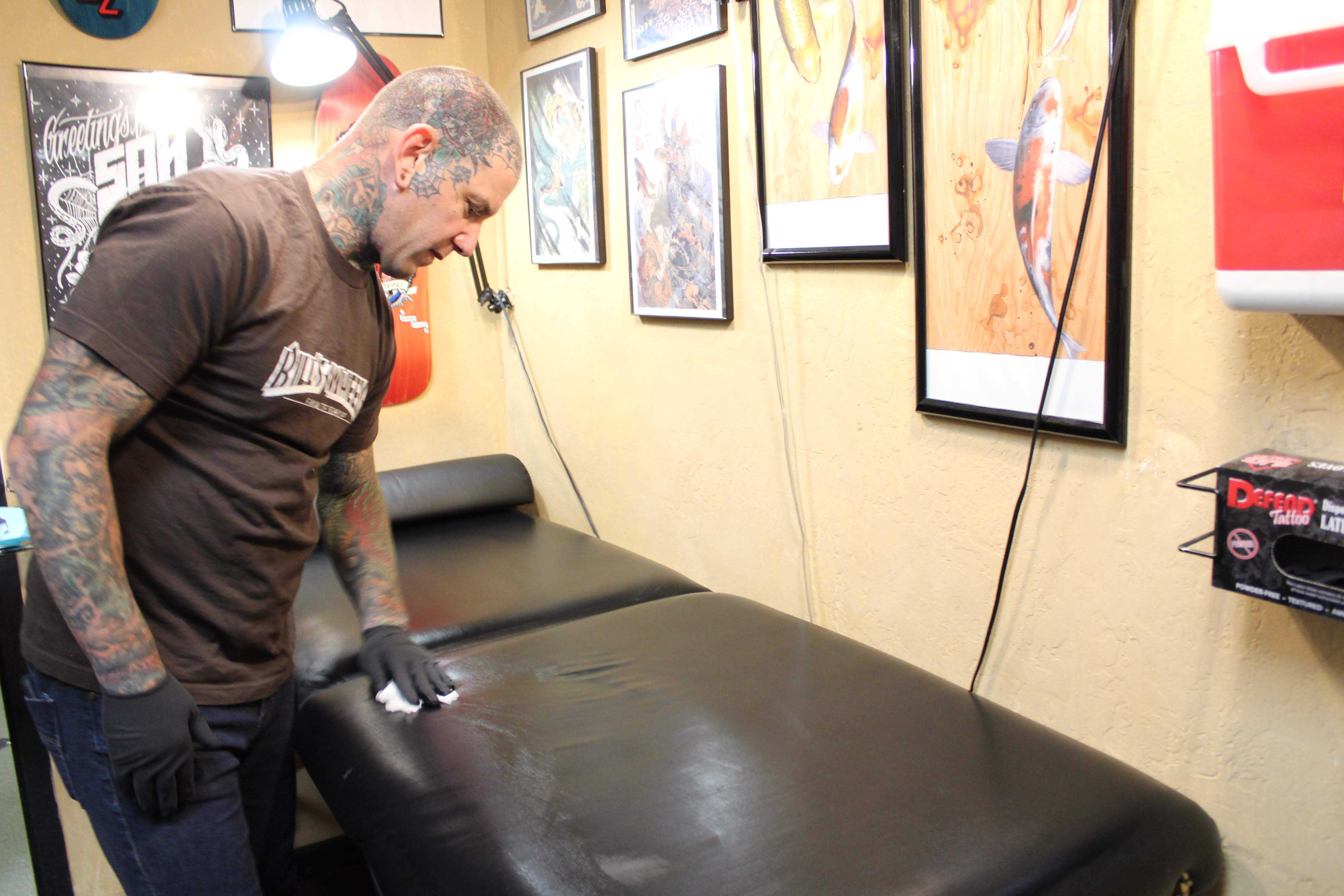 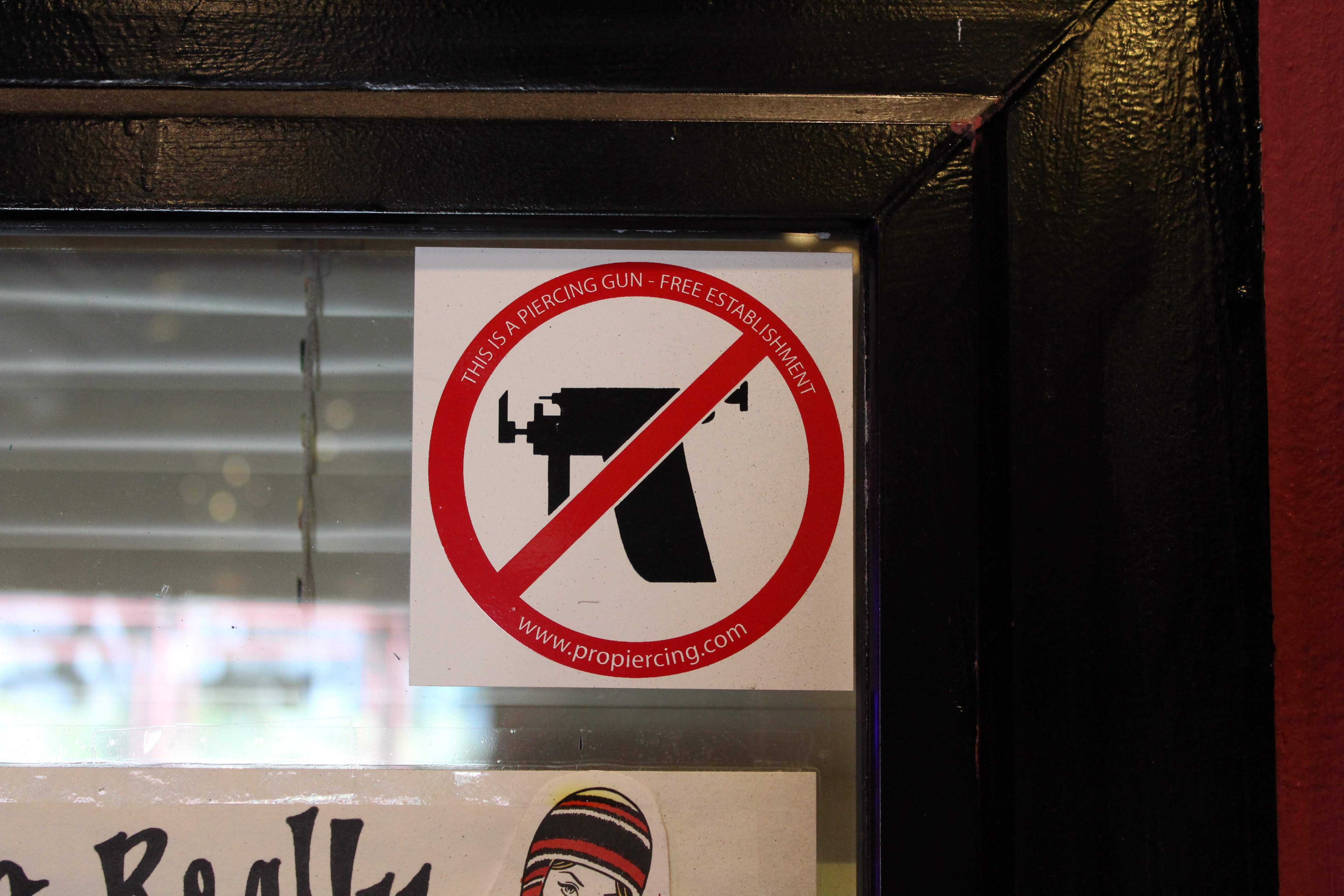 No piercing guns are used in the facility, only handheld needles 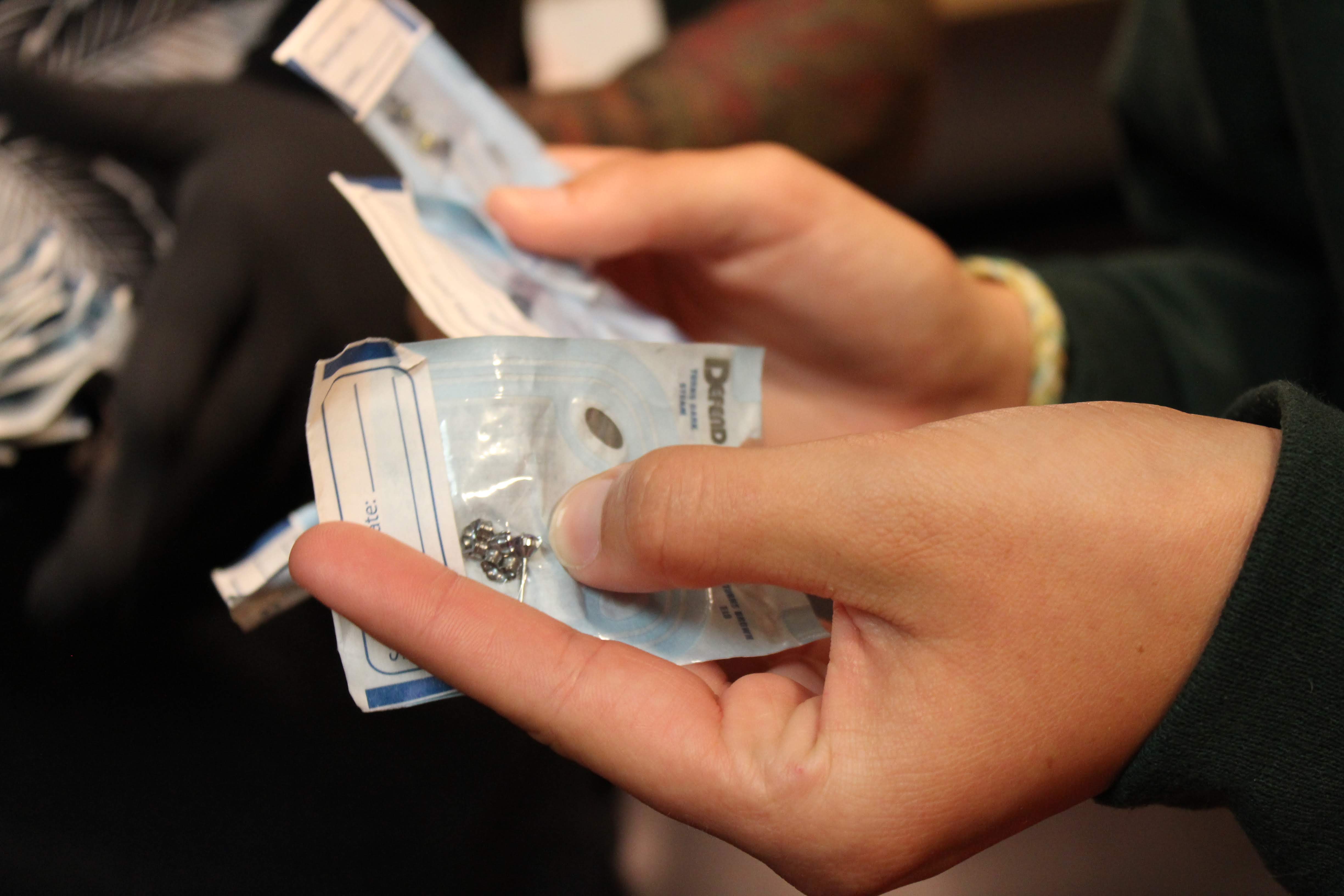 Choosing which earring will be applied 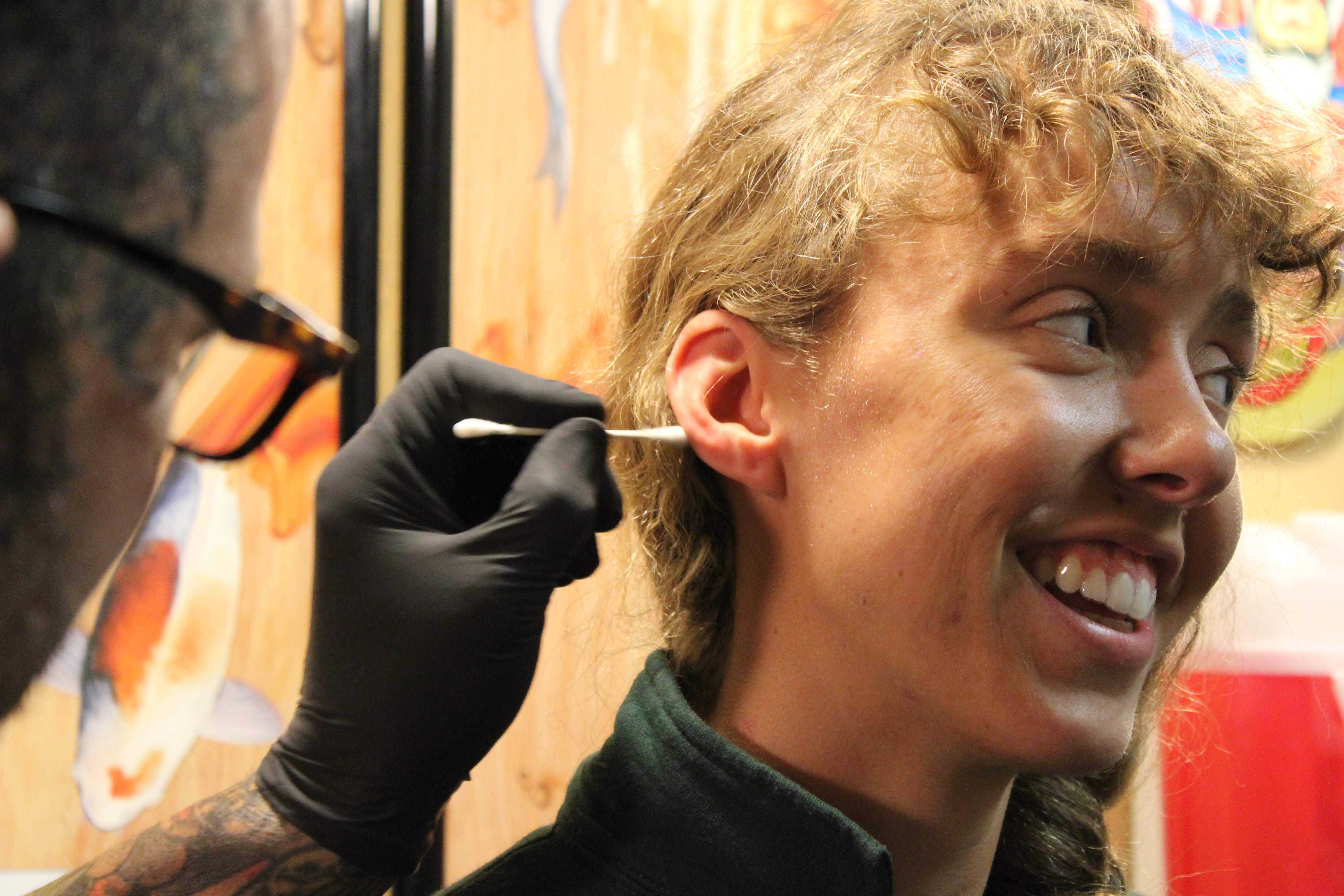 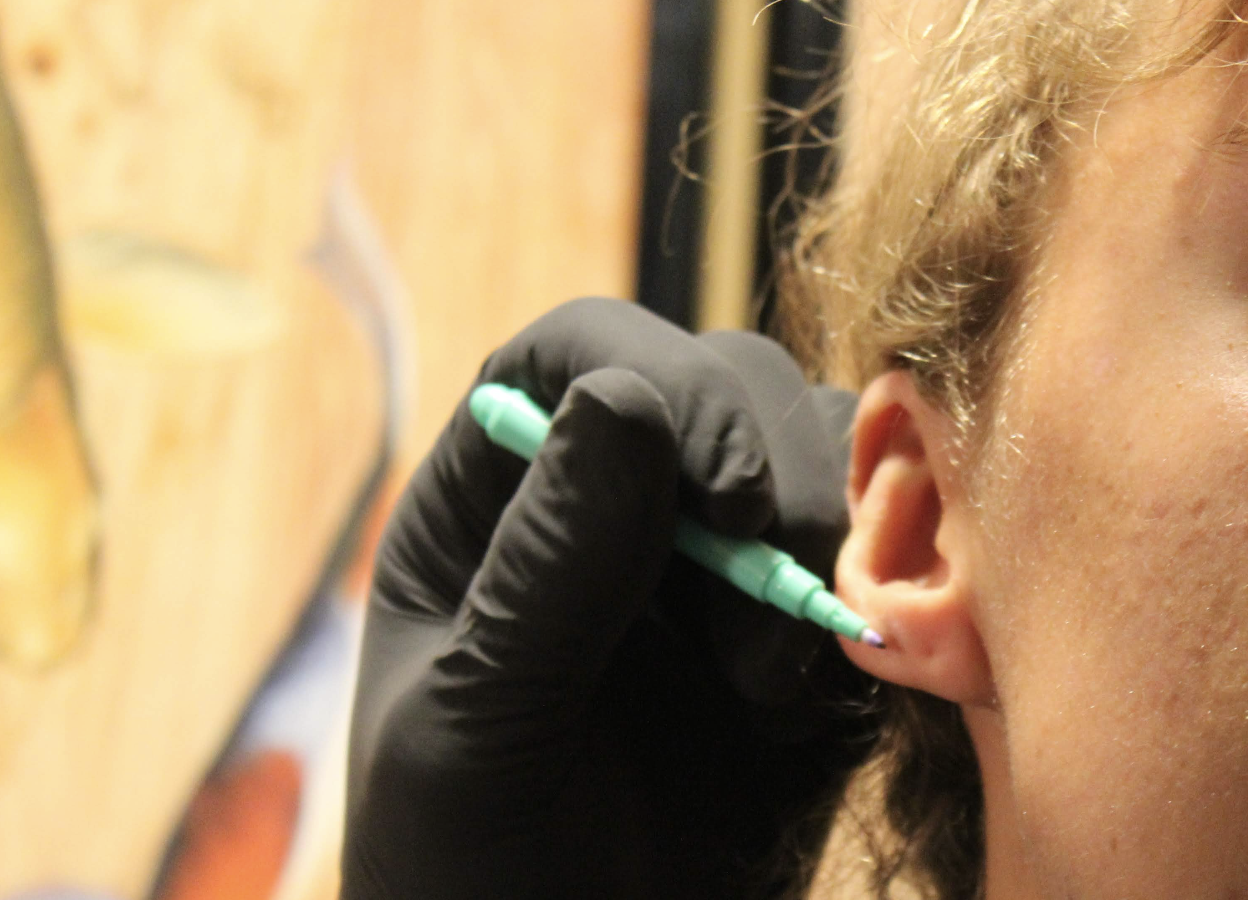 Herman plans where the piercing will go 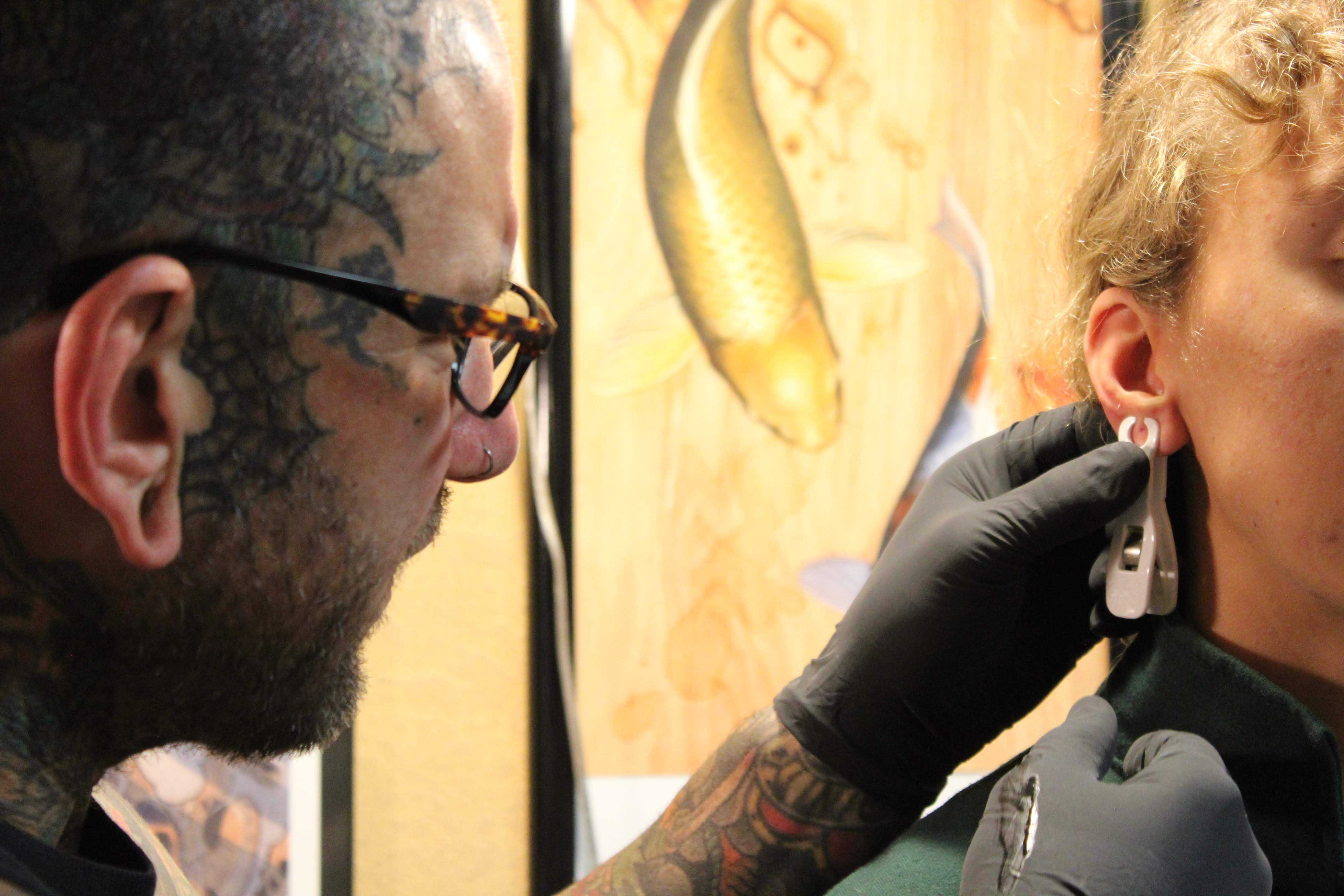 Attaching a clamp to Milne’s lobe 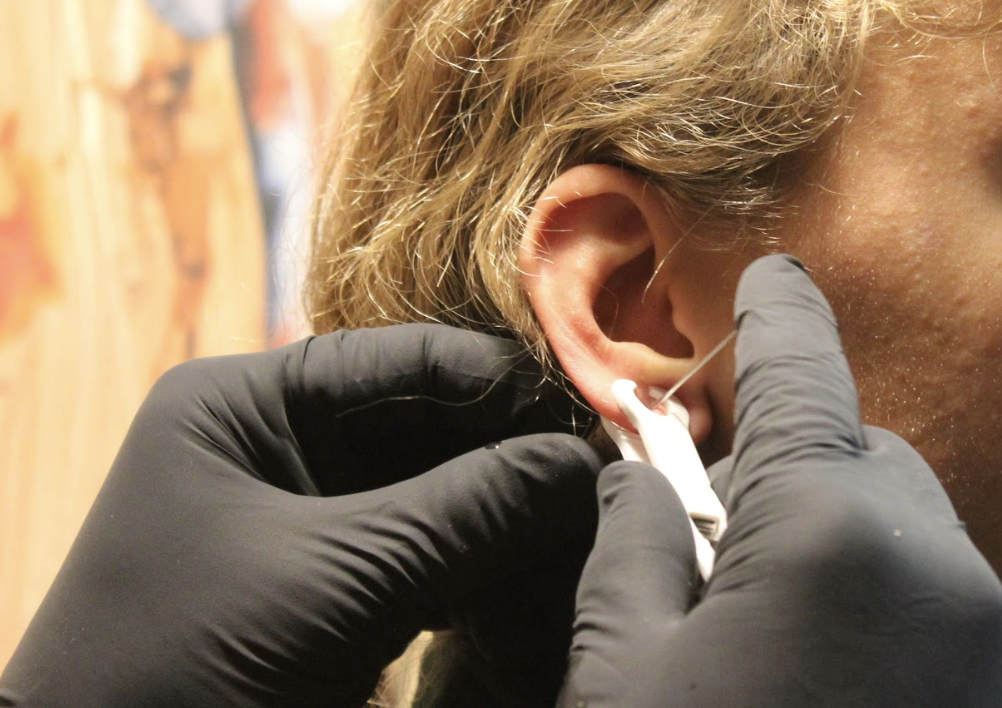 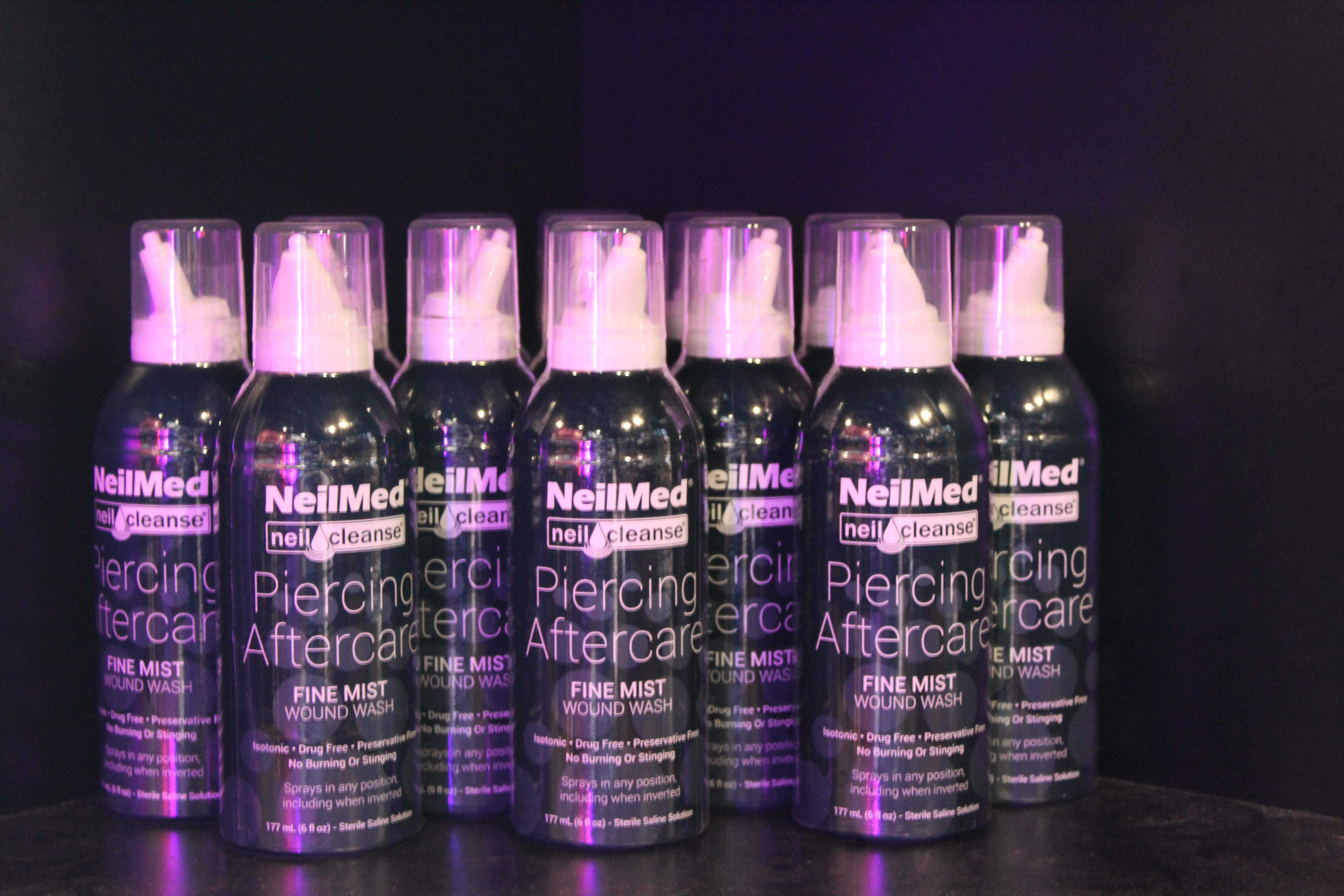 Piercing aftercare can also be bought at the Fatty Zone 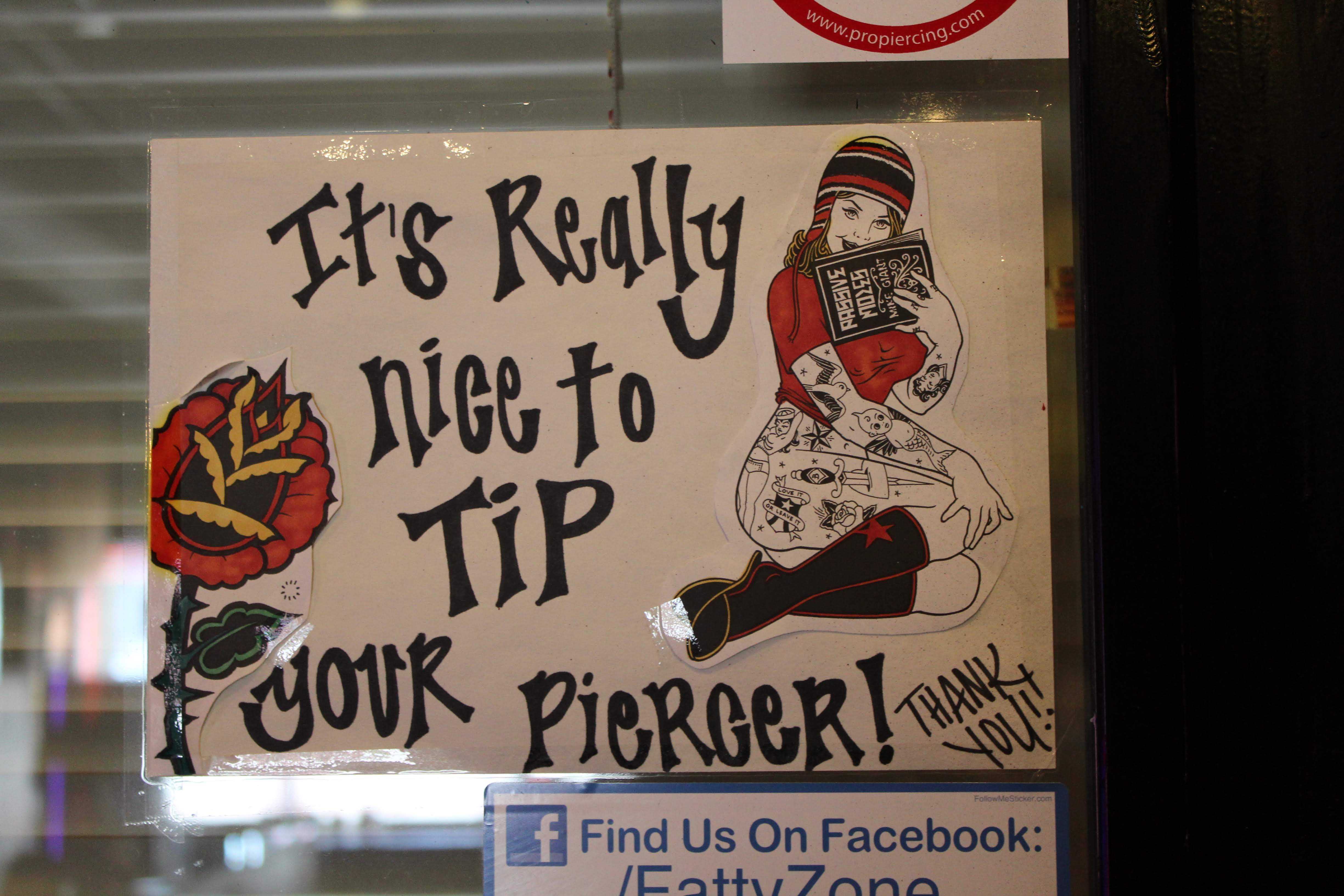