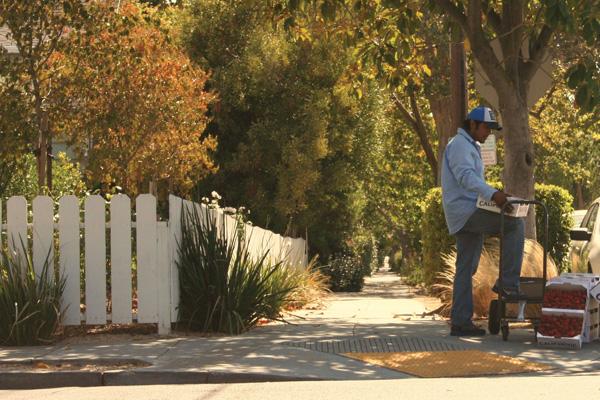 Immigrants struggle with their patriotism

A man stands on a street corner, holding out a box of strawberries.  His blue button down shirt sticks to his sweat-drenched skin and his books are worn dow and caked in mud.

Cars drive by, but none stop. He runs after them in the hopes of making a sale. Unsuccessful, he returns to his corner. Two o’clock in the afternoon, $5 made, yet he stays optimistic with a determination fueled by a dream of possibilities. This is the life of Roberto, 35, an illegal immigrant and fruit vendor stationed about a mile away from Palo Alto High School, whose name has been changed due to the sensitivity of the topic.

Roberto is one of countless men and women who cross the Mexico-California border illegally every year in hope of new opportunities. Since its founding as a nation more than 200 years ago, America has strived to be the land of freedom, equality and possibility, qualities that have appealed to immigrants for centuries.

The DREAM (Development, Relief, and Education for Alien Minors) Act, a relatively new piece of legislation now supported by Obama, was introduced by Congress in 2001 in hopes of aiding illegal immigrants.  Intended to grant minors, students and long-term residents an opportunity for permanent legal residency, the DREAM Act has reignited hope in immigrants searching for the liberties for which they initially came to America.

In addition to the DREAM Act, a bill was passed August 2012 here in California that, according to the San Francisco Chronicle, “would prohibit local police from detaining anyone on an immigration hold if the person is not charged with or has not been convicted of a serious or violent crime.”

In other words, the decision of what to do about non-citizens once in custody would no longer be made by local law enforcement.  However, the Chronicle article provides other viewpoints as well. Jessica Vaughan, director of policy studies for the Center for Immigration studies in Washington, D.C, argues that “it would force them to release people they believe are a threat to the public.”

However, these bills have made life more difficult for illegal immigrants, as expressed by Roberto. He also acknowledges that changes are being made.

“I, along with many other people, am not eligible, but it really is good for those who are,” he says about the DREAM Act.

Although not eligible for the DREAM Act’s benefits, Roberto still views his life here as a blessing.

“Although I can’t vote here, I stay… Life here has provided me with some opportunity.”

Adan, local painter and a legal immigrant, has a similar view on the DREAM Act to Roberto.

“I know a lot of people who have been here since they were little,” Adan says. “And I think that if they are loyal taxpayers, they should have just as many rights to citizenship as anyone else. Thanks to the US, I’m living a good life with work, food, a car and clothes on my back.”

Moving to America, however, has proven difficult in certain aspects for Adan.

“It can be hard for some of us [immigrants] to love America when people see us differently due to the side of the border on which we were born,” he says.

Roberto agrees, and points to the hardships he’s faced as an immigrant, “There are racist people here, it can’t be helped… Working here I’ve encountered people who don’t want us here,” he says. “I’ve even had police officers go out of their way to punish me.”

Roberto relayed one such police encounter.

“I was selling, a policeman parked and told me I couldn’t sell here, and I said OK and started to pack up,” Roberto says. “But then he started to handcuff me. He knew some Spanish and in it he told me he would report me to immigration… Then he started saying ‘f*** you’ and some other things like that… I don’t know what it means but I’m pretty sure it wasn’t anything good.”

On the contrary, the Palo Alto Police Department says its employees “treat everyone equally regardless of their race, gender, or citizenship,” according to police protocol.

It can’t be denied that still looming are the feelings that America should stay just that: all-American.

“I believe American jobs should go to true-blooded Americans,” says one Paly junior. This is one of many who believe illegal immigrants have been treated with more leniency than deserved.

Regardless, Adan believes the DREAM Act will counteract negative feelings toward immigrants.

“With the new DREAM Act, the Hispanic community will have many more chances to come out on top,” Adan says.

Many legal immigrants have a more neutral view on their own patriotism. Shina Avalos, a junior at Paly, moved to the US in 2006 from El Salvador.

“My family is pretty patriotic,” Avalos says. “We celebrate 4th of July, and we support the way the government runs the country. This is probably half due to the fact that we go to school here and contribute to society.”

As Avalos stated, many legal immigrants have the opportunity to fully immerse themselves in American culture, as opposed to illegal immigrants like Roberto, who are not fully supported by the government they reside under. The importance of this support is infinite, as evidenced by Adan.

“All I want is to be part of a country that accepts me,” he says. “That’s the foundation of patriotism.”