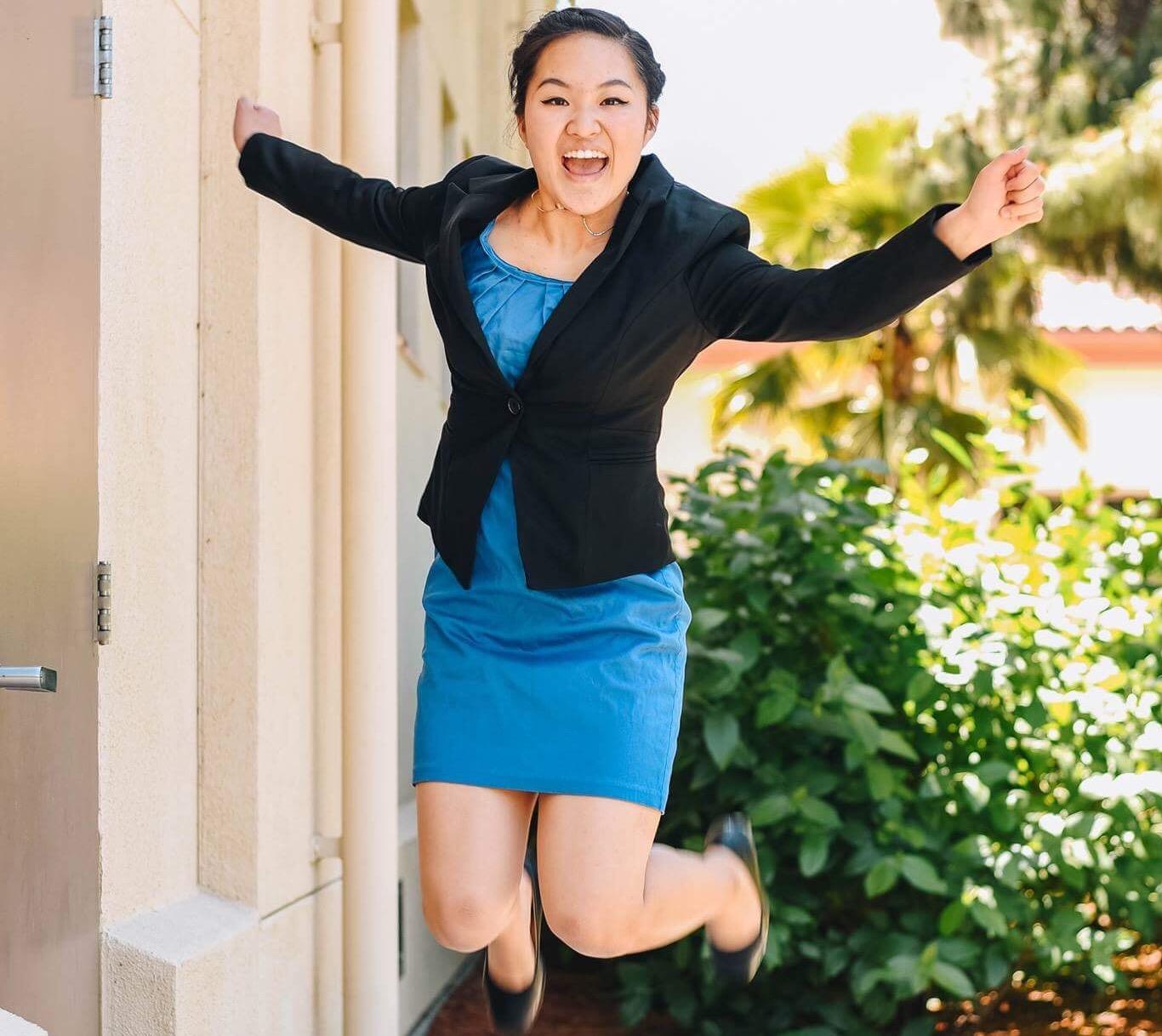 How I Learned to Speak

My very first debate tournament did not go well.

Picture this: a smallish, Asian girl with piercing, smoldering eyes, hair slung back, white cork heels clicking as she gracefully glides across the classroom linoleum floor to a wooden podium and delivers a dazzling argument that leaves her opponent speechless and judge amazed.

That goddess-like, terrifying sex symbol was what freshman me aspired to be.

Now picture this: a smallish, Asian girl with childishly unplucked eyebrows, mascara smudged around her eyes like a racoon and her blazer collar flipped up. She’s trying not to cry from nervousness as she takes a sip of the tea her father made for her that morning but then accidentally spilling it down her blazer.

Yep. That’s what I actually looked like. And that was the day I figured out I wasn’t exactly cut out for debate. 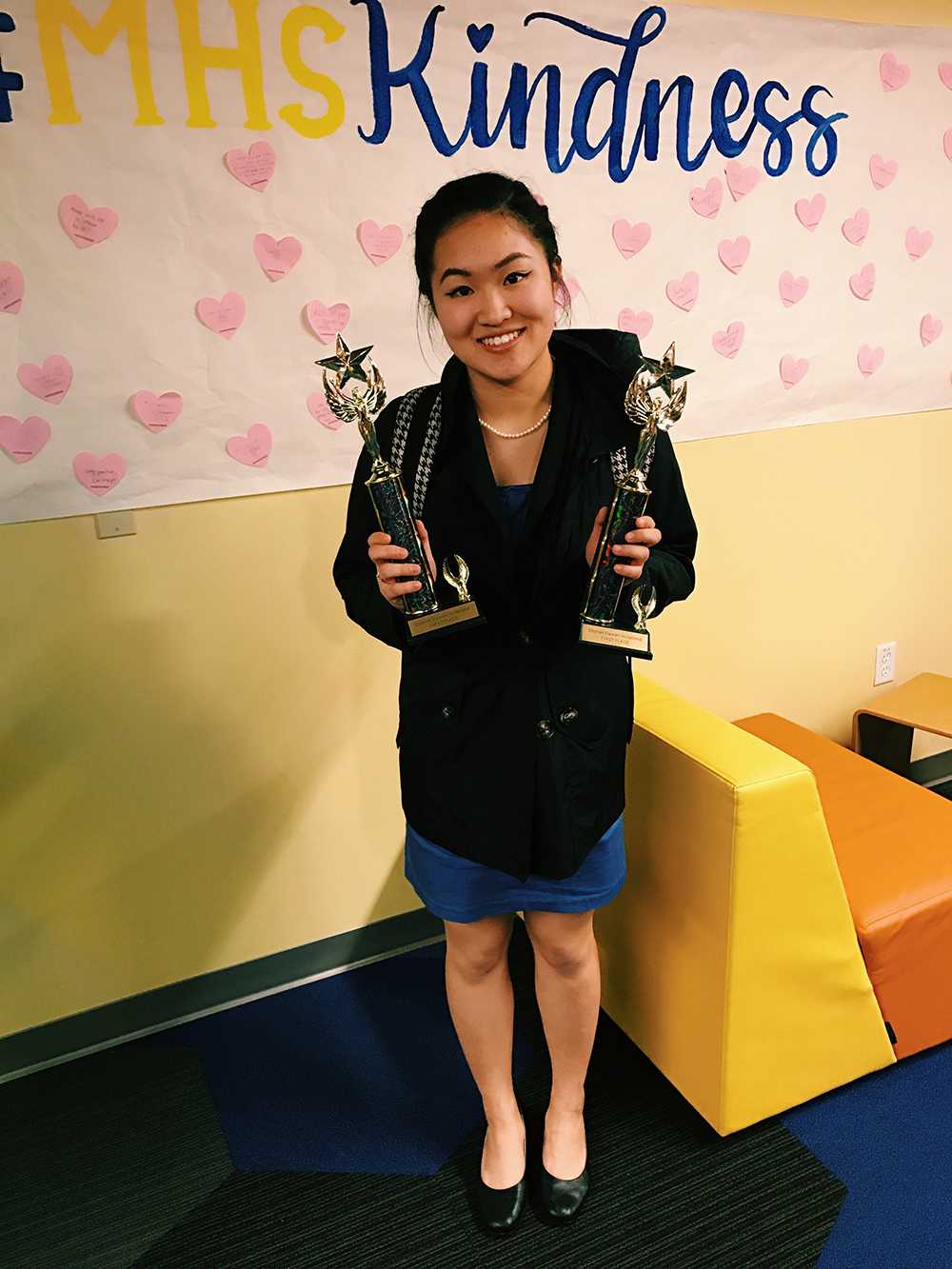 Me, standing with two first-place trophies I won at the Stephen Silvers tournament at Milpitas High School. If you showed freshman me this photo, I would’ve first noticed how attractive I look, and then proceeded to gawk over the awards.

Looking back at it, I’m a bit surprised at myself. I was the kid in middle school who hated school presentations. I had a particularly bad incident in eighth grade where I spent the 20 minutes before my presentation shaking in my own pool of cold sweat. If you had told me then that in high school, I would be the captain of my speech team, I would’ve laughed.

Back then, my comfort zone extended about a foot beyond me. Simply talking to other people was a breach of my little comfort bubble. I would observe and listen to other people talk, but I would not jump into the conversation. Usually it was because I was scared I would say something that would make everyone hate me — something that was quite possible, considering the fact that I’m more conservative than the average Palo Altan.

So when I joined speech and debate and attended a tournament, I didn’t just take a step out of my comfort zone: I built a rocket ship and blasted out of it. And after I found out that bitterly arguing with bitter people about Kantian ethics and other philosophical approaches wasn’t my forté, I tried out interpretive speech, or competitive acting. So instead of shaking in a pool of cold sweat before I stumbled up to speak in front of a room of people, I got to shake and cry in front of an audience while speaking — and win awards for it!

Although the most important thing speech and debate taught me was how to speak up, it’s also shown me how much my family means to me.

I’ll be frank about this: I never realized what superheroes both my parents were until I saw how much they do for me just so I could compete in speech. My dad is willing wake to up early on a Saturday to drive a nerd like me to speech tournaments at other schools all over the Bay. He’ll make me warm breakfast and tea to ensure I’m nourished for a day of crying at people. When my dad judges at tournaments, he’ll pour his entire heart out into the activity. Both my parents are always there to pick me up from my tournaments and comfort me if I’m feeling bitter about my performance. And most importantly, they laugh at all the jokes I’ve written for my speech — even the ones that are so bad they’ll make onions cry.

It’s hard to imagine sometimes that an after-school program would have such a big impact on my life. It’s taught me so much about myself and the care my parents put into making sure I can keep doing what I love. And perhaps most importantly, it’s taught me how good it is to take a flying leap out of my comfort zone — something that’s left me speechless on so many accounts.