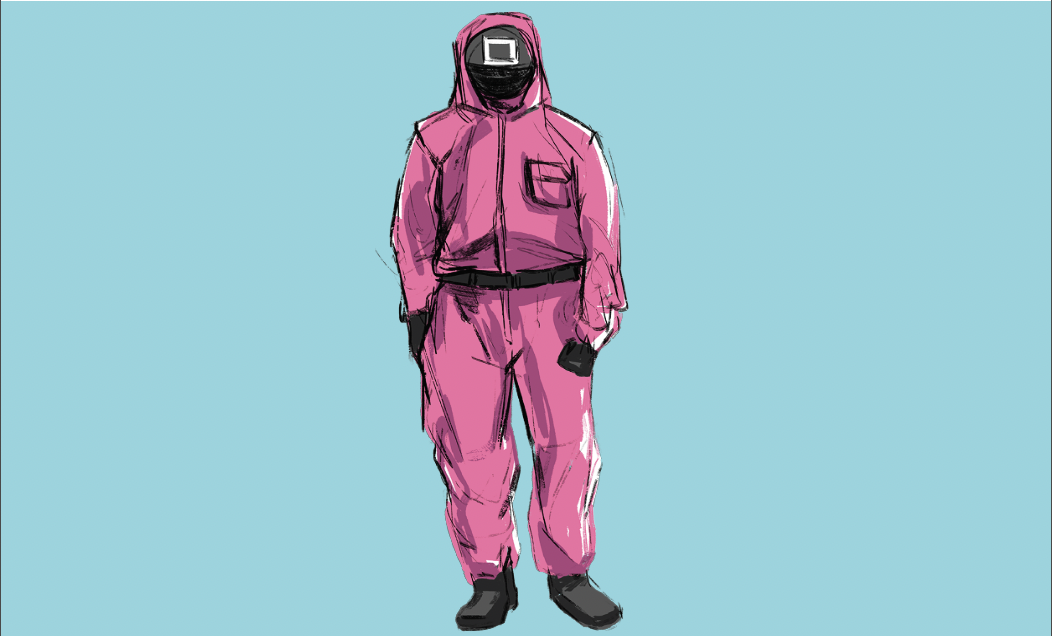 “Thank you for playing with me.”

Crimson blood splatters stain the dirt of a dingy alleyway, contrasted sharply by the deep, golden-orange light that casts the dusty path in a soft glow. In the middle of the road are two blue-jumpsuit-clad women, sitting on a stairwell as they share what very well may be the last conversation of their lives.

All around them, gunshots echo through the streets, the taste of violence imminent in the air. You’d think the constant reminders of death would give the scene a terrifying tinge, but instead, it is oddly poignant, a small glimpse of hope in an otherwise bitter and violent show. 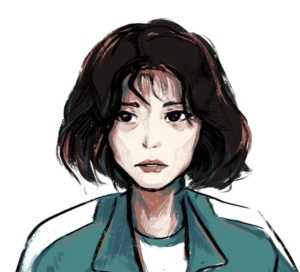 Such juxtaposition of false innocence and garish violence is the lifeblood of “Squid Game,” a 2021 South Korean drama produced by Netflix. The series has become a smash hit in the United States, becoming the streaming service’s most-watched original show, racking up 111 million viewers during its first 17 days on the platform.

The premise of the show is horrifyingly dark: hundreds of people, all in varying states of debt or destitution, are invited to participate in a series of children’s games in order to win enough money to pay back their debts. The catch? In the Squid Game, losing means death, and the players must decide whether or not the cash prize is worth the risk.

Seong Gi-hun, the show’s protagonist, is a divorced father who struggles to make ends meet and provide for his daughter and injured mother — his efforts consistently inhibited by a tumultuous gambling addiction. Invited to participate in the Squid Game, his unwavering optimism and kind heart make him an unlikely success, and he slowly gathers a small rag-tag group of friends to help him through the various challenges. However, in these twisted games, people are never what they seem, and Gi-hun soon finds that there’s treachery in everyone — even within himself.

“Squid Game” is a surprisingly emotional depiction of human nature and a sharp criticism of the evils of spectatorship and social stratification. While still sticking to its brutal, dystopian plotlines, the show manages to touch on multiple social issues via its deep, complex characters, one of the many reasons that Paly students and people across the country are drawn to it.

Although at first glance “Squid Game” seems like any other dystopian drama, director Hwang Dong-hyuk has described it as an “allegory for modern capitalist society.” The Squid Game is presented as an extreme competition, comparable in some ways to the extreme competitiveness we often find in our own economy and job markets, and the mentality of worker vs. worker — shown by the contention and backstabbing between the players — only serves to benefit the people in charge.

Human life is treated as meaningless in the Squid Game, and the garish disregard for the lives of the players reflects the deeply flawed and unshakeable hierarchy that is the root of this society, the worth of a man determined solely by how much money he has. It’s this desire for wealth that defines the Squid Game and the people who are a part of it. Ultimately, it speaks to the deeply ingrained human tendency to prioritize our own success over the success of others, only in “Squid Game,” there is a much deadlier result.

The world of “Squid Game” also reflects aspects of South Korea’s social and political climate, including the extreme rate of elder poverty that is present in the country. Even Gi-hun, our charming, kind-hearted protagonist, steals money from his aging mother in order to support his gambling addiction. When she is hospitalized due to an injury from over-working, her healthcare costs begin to rapidly increase, providing yet another motivation for Gi-hun to win the Squid Game. 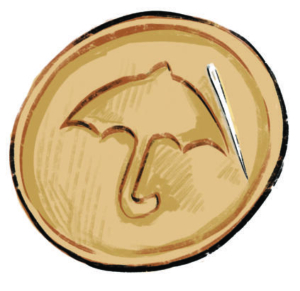 The harsh brutality shown almost garishly in “Squid Game” speaks to another evil — that of spectatorship to violence in both real life and film. In Episode 7, “VIPs,” rich sponsors of the Squid Game are invited to witness one of the many deadly events, providing an extreme example of viewing gore and brutality as a form of entertainment. However, this causes the audience to question their own position as viewers, and to wonder: does “Squid Game” glorify the very violence it warns against?

Palo Alto High School senior Grace Muma says that the social commentary made by Squid Game sparked her to think deeper about the show.

“I think that the show did a really good job of showing how horrifying capitalism can be and how money really changes people,” Muma said. “I also thought it was interesting to think about how we as viewers overlap with the VIPs in the show by watching the players fight for money and for their lives.”

Just as “Squid Game” captivated the nation, the show has become popular with Palo Alto High School students and staff. Sophomore Sophie Vargha said her favorite aspect of the show is the complexity of its characters.

“What made Squid Game so compelling was the rawness of the characters,” Vargha said. “I was surprised how realistic the characters were. Even though they were in the strange situation of these games, they were very real.”

On one side of the spectrum, we witness players like Kang Sae-byeok, a self-proclaimed defector from North Korea whose desire is to win for her mother and younger brother, a seemingly selfless motive that propels her to be one of the game’s most reclusive and secretive players.

“People can relate to the characters’ situations outside of the game, and see themselves in their decisions.”

On the other hand, a foil to protagonist Gi-hun’s positive and kind approach, businessman and child genius Cho Sang-woo is motivated solely by his own survival. His calculating personality and compulsion to win, no matter the cost, prove just how evil people can be when they’re desperate.

Vargha said she believes that these relatable characters are a large contributor to its popularity. 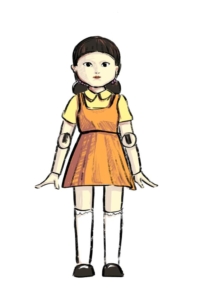 “I think the show was so popular in the US not only because of the amazing writing and acting, but because of the amount of poverty in this country,” Vargha said. “People can relate to the characters’ situations outside of the game, and see themselves in their decisions.”

“I think that it definitely deserves its popularity for how interesting the concept is and how well it was executed,” Muma said. “All of the main characters were so well written and believable.”

Through the eyes of the players, “Squid Game” gives us a vivid, unflinching look at what drives us as humans, and how that relates to our relationships with others when our lives are on the line. We may want to relate more to the upstanding Gi-hun, but if we were truly facing death, how many of us would match more with Sang-woo’s approach of calculating betrayal?

“If you take a closer look, you’ll see how horrific the implications really are.”

In the end, “Squid Game” leaves us with more questions than answers about ourselves and others, and sparks reflection in its viewers. There is a character for each of us to relate to, whether that is the elusive Sae-byeok, the clever Mi-nyeo, or the brutal and violent Deok-su.

With its sharp dialogue, eerie musical score, and stunning visuals, “Squid Game” hits all its bases with harsh intensity, and it’s no surprise that its deep themes have resonated with people all over the world.

“At first glance, ‘Squid Game’ looks like it could be straight out of a child’s imagination,” Muma said. “But if you take a closer look, you’ll see how horrific the implications really are.”