Guardians of the Rail

From the Churchill Intersection, Train Security Guards Watch the World Go By

Mike Haight has worked a lot of jobs — from landscaper to bowling alley clerk — but none of them are quite like this one. For the first time he feels pride in what he does, a strange sense of satisfaction during his arduous $9-an-hour shifts, which sometimes go for as long as 4 a.m. to 4 p.m. He relies on his pride to keep him going when the exhaustion takes hold in the dawn hours and his eyes start drooping after staring at nothing  for so long and his legs get heavy from standing all day and he has to remind himself of why he must stay awake. Some people working minimum wage jobs flip burgers, others sweep floors, but Haight has found himself carrying a heavy burden, responsible for keeping the tracks safe in a time when they seem most threatening to the Palo Alto community.

Haight is the sort of man who likes to bully bullies and has so many tattoos on his neck — including the names of his wife and two sons — that he jokes he doesn’t have room for any more. He is also one of the crossing guards who monitors the train tracks at the Churchill and Alma intersection, right next to Palo Alto High School, where he graduated in the Class of 1996.

The train guards work for Val Security, a private security firm commissioned by the City of Palo Alto to watch over the tracks since 2011. So far, the city manager has spent $133,000 on an emergency contingent of train guards this year. In April,  the city council earmarked $175,000 to effectively continue the guards’ presence into the summer months, though the longevity of this arrangment remains to be seen.

The city has started to experiment with intrusion detection systems — motion sensor cameras which alert police in the event of unauthorized movements around the tracks.

“Guards are one thread of the safety net,” says Kenneth Dueker, of Palo Alto Emergency Services. “We don’t know how long we’ll continue with them. As technology improves, they may become less important and we may phase them out.”

Yet, as Haight’s colleague Prentiss McKnight points out, “I truly believe that a person’s presence can change the atmosphere of a situation.” Machines might be more efficient, but a person can provide a unique sense of assurance and empathy that a camera cannot.

One afternoon toward the end of McKnight’s shift, a minivan pulls up at a red light and a woman sticks her head out the window. “Thank you for everything,” she says, and hands him a pink bag of muffins. “You’re a sweetheart,” he tells her, smiling.

Little instances of gratitude like this one make the job worth doing for McKnight, despite the fact that it has caused him to cry more in the past few months than in the last 20 years. For the city, the physical presence of people seems to provide a sustainable sense of visible protection against the suicide cluster that has plagued Palo Alto this past year.

“This [the guards] is the last resort,” Palo Alto school board member Terry Godfrey says. “It’s the point where you’ve got nothing. It’s desperation. You’re putting these people out there as the last line of defense.”

After the original suicide cluster of 2009-2010, a group of concerned Palo Alto community members began to stand along the railroad to serve as a deterrent. They were all volunteers, but they felt strongly about the importance of maintaining an active presence. The organization became known as Track Watch.

“A suicide contagion is a strange phenomenon,” says Godfrey, who often worked the Friday morning shift for Track Watch. “It’s sort of like with yawns  — there is no reason for yawning to be contagious and yet it is. We don’t understand it [the suicide cluster], but we just want to do what we can to stop it from spreading.”

When the imminent threat of suicides began to subside, fewer and fewer people signed up to volunteer to stand by the tracks, leading the city to hire private security guards, who worked the evening hours at the two busiest locations. Now, in light of the city’s risk assessment, guards are stationed at all times on every single intersection of the Caltrain tracks. 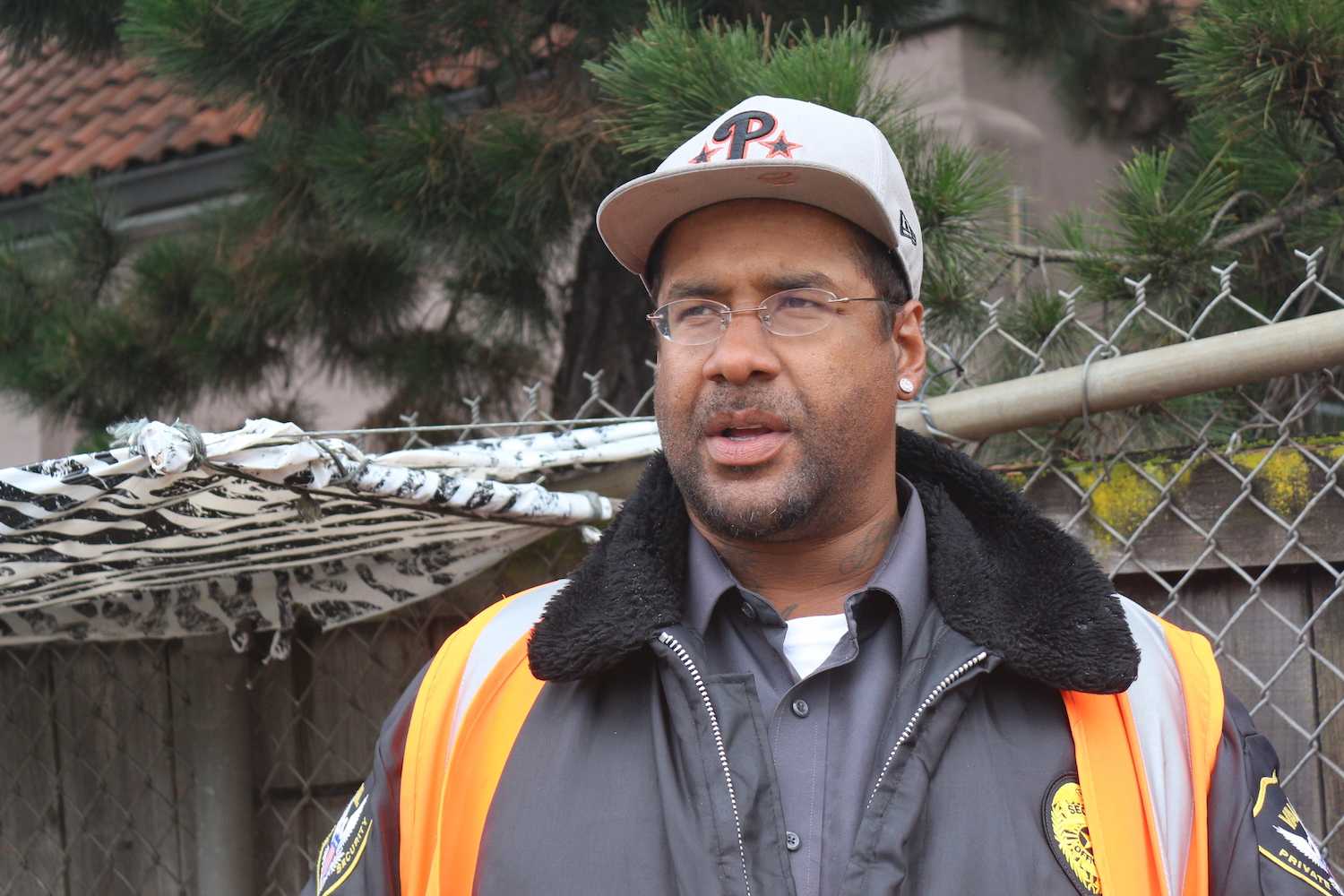 RAIN OR SHINE Mike Haight stands beside the makeshift shelter the guards have constructed to protect them from the rain. Photo by Ana Sofía Amieva Wang

The Moments That Save Lives

It’s nearly impossible to measure, tangibly, the impact of Haight’s job. He watches hundreds of pedestrians cross the tracks each day, along with thousands of cars, and for all but an infinitesimal amount of them the tracks are merely a passing point and not the final destination. Still, numerous studies have shown that creating noticeable suicide barriers does indeed prevent suicides.

Only one suicide occurred in the five years after the Duke Ellington Memorial Bridge, in Washington, D.C., added a prevention barrier. Even more telling, there was no increase in suicides from the nearby Taft bridge. However, in the seven years before the construction of the barrier, 24 people died by suicide. To Project Safety Net, the organization which originally speerheaded the implementation of guards, case studies like that of the Duke Ellington are enough to justify the expensive cost of maintaining private security alongside the tracks in Palo Alto.

“It’s like training for an earthquake. Nothing prepares you for it when it actually happens” — Mike Haight

And then there are the moments the guards themselves remember. Haight has only been on the job for two months — he didn’t know about the suicides in Palo Alto until a passerby told him — but even he has had his share of trouble.

It was well past midnight and Haight noticed a drunk man standing on the edge of the rails. Lingering.

“Is anything wrong?” Haight asked.

Haight wondered whether he should call the Palo Alto Police Department dispatch, which in turn will notify Caltrain.

No one else was around. Haight got ready to make the phone call. Finally, before the next train came, the man stumbled away and didn’t return. The rest of the night passed in silence, punctuated only by shrill blasts from the horns of passing trains.

Haight has no preparation for these moments — few jobs come with such a steep learning curve. “It’s like training for an earthquake,” Haight says. “Nothing prepares you for it when it actually happens.”

One security guard, on his first day on the job, says that his training lasted seven minutes: the seven minutes before his shift began, when he listened to the guard before him explain what to do. “Be alert” is the only thing he says his supervisor told him before he started.

All Haight really has are his own words. He doesn’t practice what he would say because he wants to sound genuine, not rehearsed, if he ever needs to talk someone out of something. He is not even supposed to leave the little yellow box where he stands, but Haight believes he would never be able to stand by and watch someone die.

“You know how most people are born with that fight or flee instinct,” he says. “I’m missing the flee part.”

One time, Rodriguez noticed a kid loitering by the tracks late at night, who admitted, when pressed, that he had recently gone through a family dispute.

Later, the kid passed by with his friends and didn’t say a word to Rodriguez. He came back alone and tapped Rodriguez on the shoulder and said, “Thank you.” Rodriguez nodded. And then the kid left.

But these moments are the exceptions. Mostly, the hours are long and boring, and the prospect of staring down the tracks lacks any real stimulation. Still, Haight has come to learn some things about the job.

He has learned the grueling nature of a 10-hour shift and has coped by relying on a zebra-patterned plastic tarp propped up with sticks to create a makeshift shelter from the rain and sun.

He has learned to spend his time squinting left and right down the tracks, checking for the three points of motion, an old trick to detect a person. “The arms, the legs, the head,” Haight says. “One of them will move if you wait long enough.”

He has learned to enjoy the trains because they break up the monotony. When they pass, he makes a jot on his clipboard, noting their time and direction. He’ll watch as many as 50 trains over the course of his shift and he always raises a hand to acknowledge the conductor.

But most of all, Haight says he has learned that there is a sense of community in Palo Alto, and he appreciates that. Police officers wave to him, old ladies clasp his hands and whisper, ‘Thank you’ into his ear, and every now and then someone comes along to quietly pay homage to a lost friend. He lets them stand nearby.

He wants to “start a dialogue with others” about the deep-seeded issues at hand,  the things that are troubling Palo Alto teens, and he always welcomes the chance to do so. He recognizes the limitations of his job, but understands the larger purpose.

“Ninety-nine point nine percent of the time I’m here nothing will happen,” Haight says. “But that point one percent makes a huge difference in the world.”

Are you feeling depressed? Need Help?

Do you know someone who is experiencing a crisis? Here is what you can do to help them.