Give Us a Bow 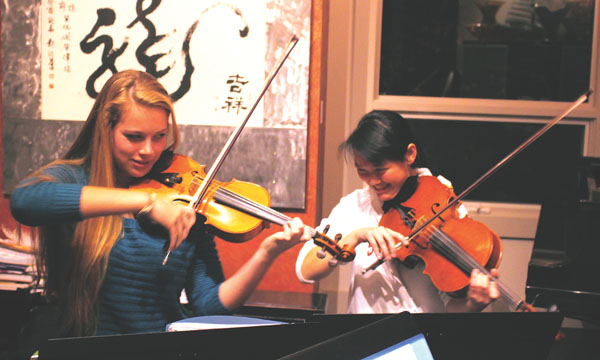 On an ordinary Wednesday night, a duet of string music can be heard spilling over the high wooden fence around the Chin family’s home in Palo Alto. The strings spin velvet melodies and the occasional burst of laughter rolls out onto the sidewalk. Palo Alto High School seniors Tessera Chin and Megan Rohrer, are practicing their instruments together.

In the music room of Chin’s house, the girls furrow their brows a little as they focus on Handel’s “Passacaglia.” Sweet, complicated music flows from their bows and through the room, bouncing off the walls. Their thin fingers dance on the violin and viola, their other arm directing wooden bows swiftly across the strings. Occasionally, they peer at each other and giggle. But they never stop playing.

Rehearsals like this are common, because both Chin and Rohrer are diligent musicians and practice often. They are both in the Palo Alto Chamber Orchestra, or PACO, a prestigious musical community of the Bay Area’s most talented musicians. Rohrer is an advanced violinist and Chin plays both the violin and the viola.

PACO holds four concerts every season and three to four hours of rehearsal weekly, but Chin and Rohrer still make time for quartet performances at such venues as the Stanford Shopping Center, Neiman Marcus and the American Heart Association. The events they play at include weddings, funerals, open houses and fundraisers. Chin and Rohrer say that they’ve done more than 50 gigs thus far and, because they are good friends, they do most of their gigs together. 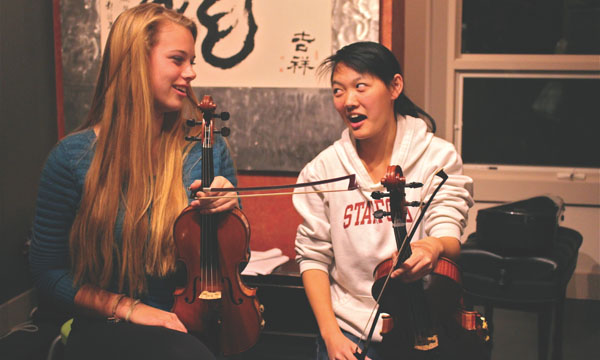 Chin’s love of music is steeped in tradition. Her grandmother taught her to sing Chinese operas; her father started her on violin when she was in first grade; her older brother majored in music at the University of Southern California and her sister plays the cello; and both siblings are pianists. Music is in Chin’s blood.

“I honestly can’t remember a time when music wasn’t part of my life,” she says.

Chin joined the Palo Alto Chamber Orchestra in 4th grade. Starting from Superstrings, the most juvenile among the five orchestras in the organization, she worked her way up to higher level orchestras. Orchestra has remained her major extra-curricular activity throughout the years, and she says that she spends about 10 hours total practicing each week.

“My family is pretty dedicated to music,” she says.

Chin’s house has become a center for rehearsals, as her father teaches group music classes. When her parents remodeled the house in 2001, they designed the music room just for the kids to practice in, Chin says.

Rohrer’s earliest forays into music were very different. She grew up in New Mexico, where she was in the Albuquerque Youth Symphony, moving to California just before her freshman year.

“I was scared to leave because I had an orchestra that I really liked there,” Rohrer says. “It was pretty much the only one in New Mexico…I was one of the best violinists my age. I was in a quartet, but it wasn’t very serious. The music community was just so much smaller.” 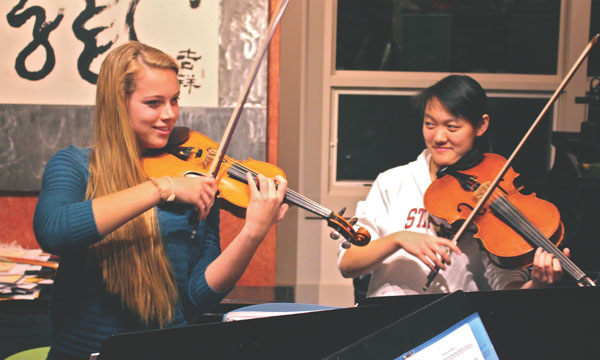 The two joined in 2011 when Rohrer had just moved from New Mexico. In the Santa Cruz mountains, Rohrer met Chin at the Summer Chamber Orchestra Workshop, or PACO camp. Together, they faced one week of intense rehearsals.

“I was really intimidated because the music world was so much bigger, and it seemed like everyone played at a higher level and there were so many people who were so much better than me,” Rohrer says.

Ben Simon, the director of PACO, says that Rohrer seemed “extremely nervous when she first started,” but that it was clear that PACO was the perfect fit for her. She was quick to befriend bright, talented girls like Chin and her sister, Delenn Chin.

Rohrer says that playing with many talented musicians pushed her to try harder and improve.

Even though there are many talented and dedicated students at PACO, the environment is by all accounts competitivity free.

“It’s a community to belong,” Chin says. “Most of my friends are from PACO… We’re all comfortable around each other and confident in the music that we’re able to produce together.”

Other than focusing on improving their own musicianship, the girls also teach other, less experienced children every Monday after school at Willow Oaks Elementary School’s after-school music classes. For two hours the girls help out by putting on tapes and fastening shoulder pads, straightening backs and pointing out notes on the staff.

“Even though sometimes it feels impossible to get them [the kids] to listen or understand, I always feel kind of rewarded afterwards because I know that we’re helping them develop one of the most important skills ever,” Rohrer says. “The results aren’t immediate, but it’s really amazing to be able to help and watch the kids grow over time.”

This summer, Chin and Rohrer are going to the PACO camp as “Chamber Music Fellows” chosen by Director Ben Simon to coach kids in the program.

At this point, they are both accomplished senior musicians who stayed in Senior PACO for three years each. Chin is the orchestra’s first viola, leader of her section.

“Tessera is the best viola in the world,” Rohrer says, grinning at Chin.

Rohrer is the first violinist and the concertmaster, chosen by Simon, for the concert coming up this March.

“She holds lots of responsibility,” Simon says, “She is one of the strongest violinists this year and she deserves the promotion.”

The girls have also gained recognition from their fellow musicians at PACO.

“Megan and Tessera are both very talented, accomplished, and hardworking people in and outside of orchestra,” says Claire Chevallier, Paly junior and PACO musician. “It’s easy to tell how dedicated and passionate they are about music when you hear them play.”

Rohrer plans to major in violin performance at Northwestern University’s Bienen School of Music this fall, and she also wants to sing in the school’s choir program. Chin, who is majoring in computer science at Stanford University, says she will “continue to play music no matter what.”

When looking back at all these years at PACO, the girls feel that they’ve acquired skills beyond the music world.

“The best thing about PACO is that it teaches you about life,” Chin says. “To teach, to cooperate, to follow and to lead.” 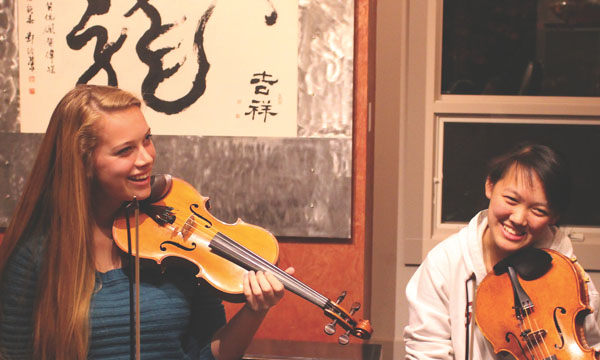