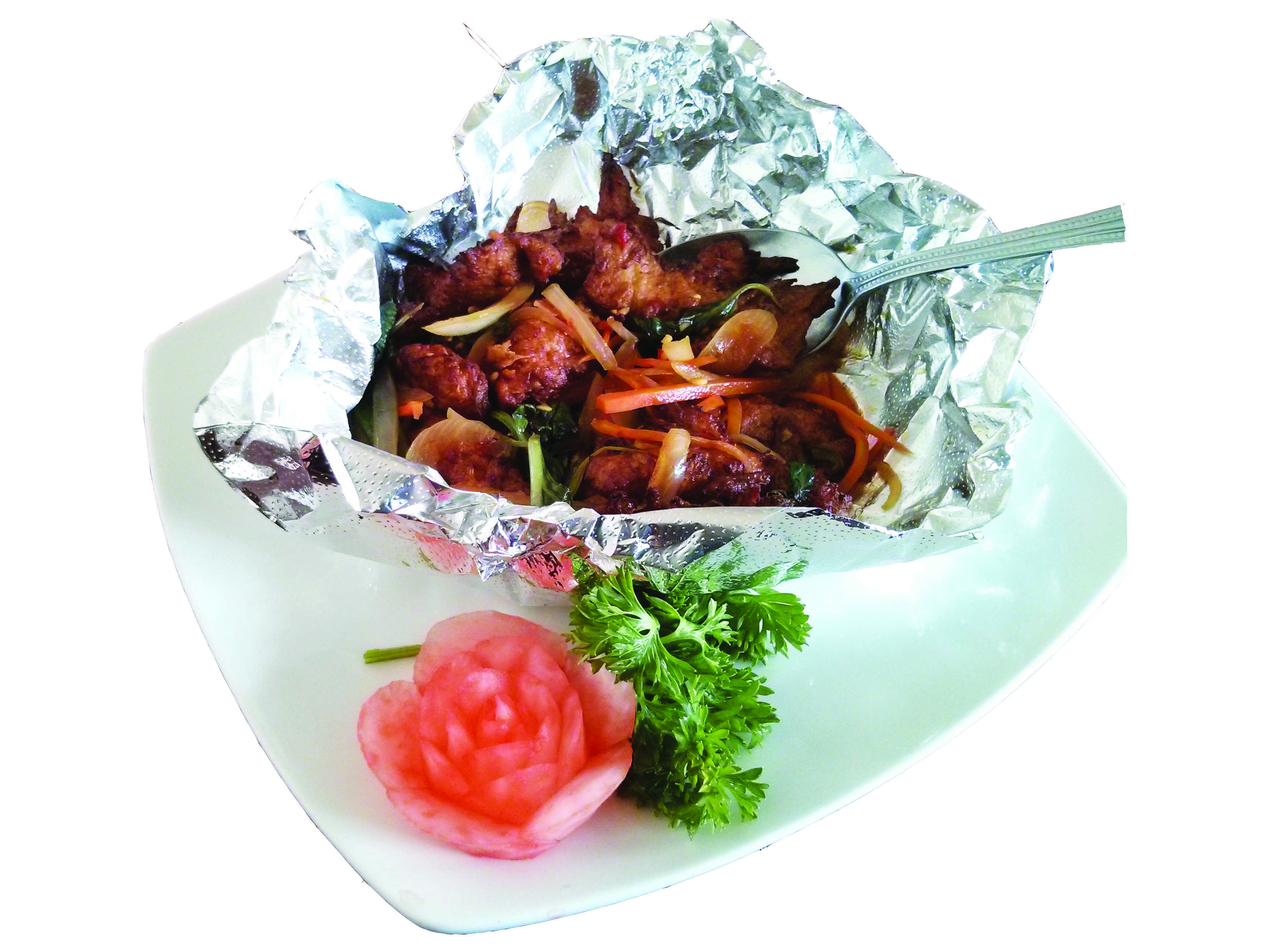 From the outside, mot much makes Garden Fresh (460 Ramona St.) different from a typical Chinese restaurant. Flyers in Mandarin cover the side windows and large windows draw attention to the storefront, as chatty customers sit inside, enjoying their meals. Modern art decorates the walls and a tiny, wooden, electrical fan at the front of the room spreads the smell of Chinese spices throughout the tiny restaurant. Outside, a small sign advertises an interesting detail: Garden Fresh is a vegan Chinese restaurant. Forget vegan cuisine; finding vegetarian food itself is incredibly difficult in Palo Alto, even though Palo Alto offers more food diversity than many other cities in California.

My family is vegetarian, and we have always loved Asian food. But before we knew about Garden Fresh, finding vegetarian Chinese takeout was a bit of a nightmare. Whenever we decided to order takeout, it was always an arduous process involving multiple menus, a lot of driving and possibly more energy than it would have taken to simply cook at home. While many Asian restaurants do have vegetarian dishes, the definition of vegetarian varies from place to place; some restaurants don’t consider fish to be meat, while others cook their food in chicken stock but didn’t think that makes the food non-vegetarian.

Garden Fresh offers two important considerations — there is no fear of accidentally encountering meat in an unassuming dumpling, and their food is not cooked in a pan that had just been used to cook meat, because they simply don’t cook meat in the restaurant at all.

More vegan restaurants have recently sprung up in Palo Alto, but most people’s approach to vegan food tends to be to take a regular meat dish, and then systematically remove all the meat. I don’t want to eat a burger that just has lettuce and a tomato slice — that’s not appetizing from anyone’s perspective. I choose to be a vegetarian because it feels wrong to me to eat the meat of an animal that has been systematically taken advantage of at every stage of its life. Yet, it isn’t difficult to cook good, filling food that’s vegan or vegetarian. Garden Fresh recognizes this and provides a welcoming option for the small but growing vegan community. 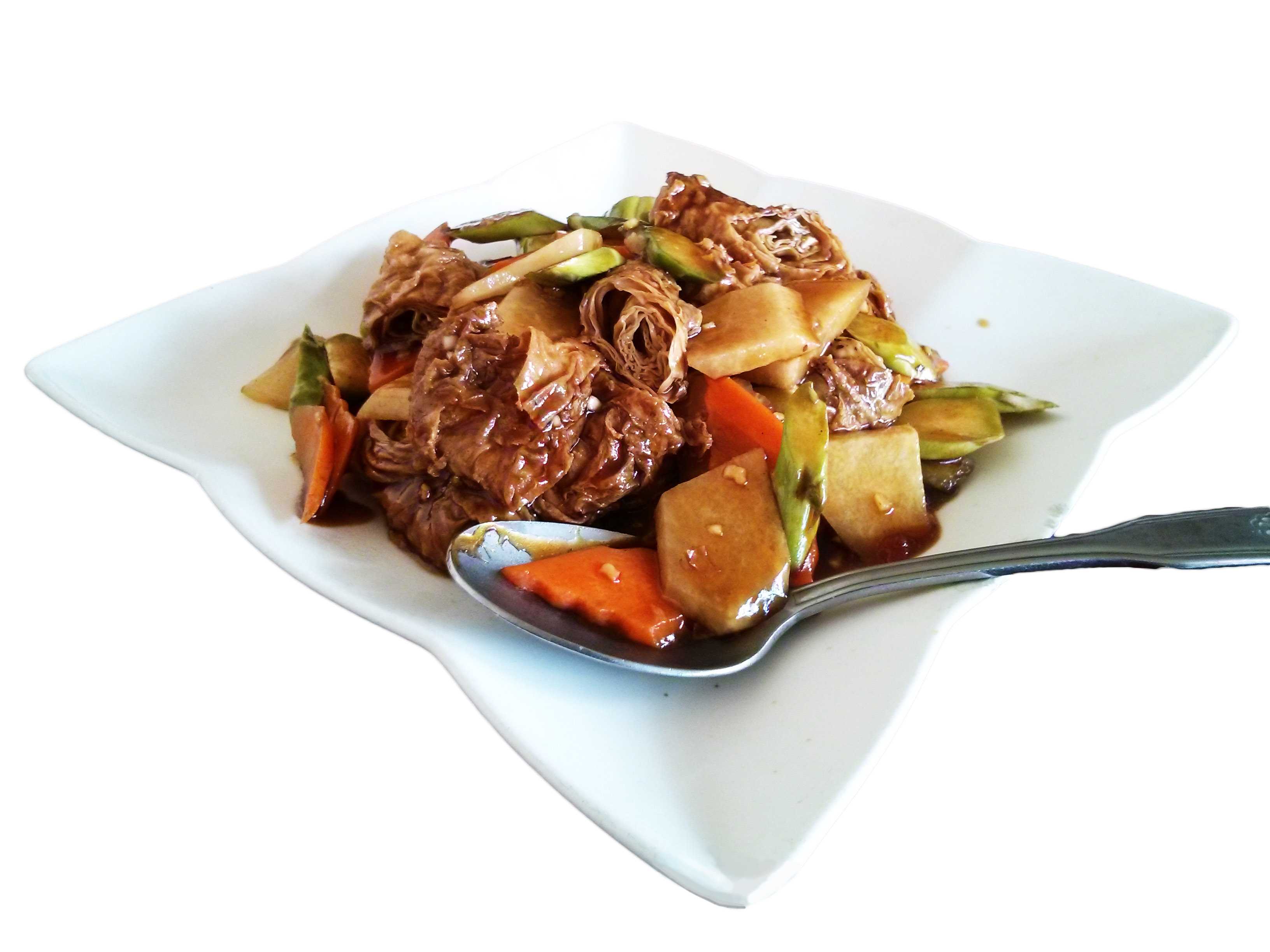 Though this dish had simple presentation, it exceeded expectation. The vivid greens and the intense oranges of the vegetables stood out against the crisp white plate. The sauce was tangy and salty and left a lingering taste of spice, by far the punchiest thing on the plate. It gave off the scent of soy; paired with the fresh, earthy scent of rice, it created a unique signature smell. The tofu skin which was rolled to soak up the sauce, providing an interesting new texture —  chewier than normal, with a smooth yet textured surface. I highly recommend trying this dish. 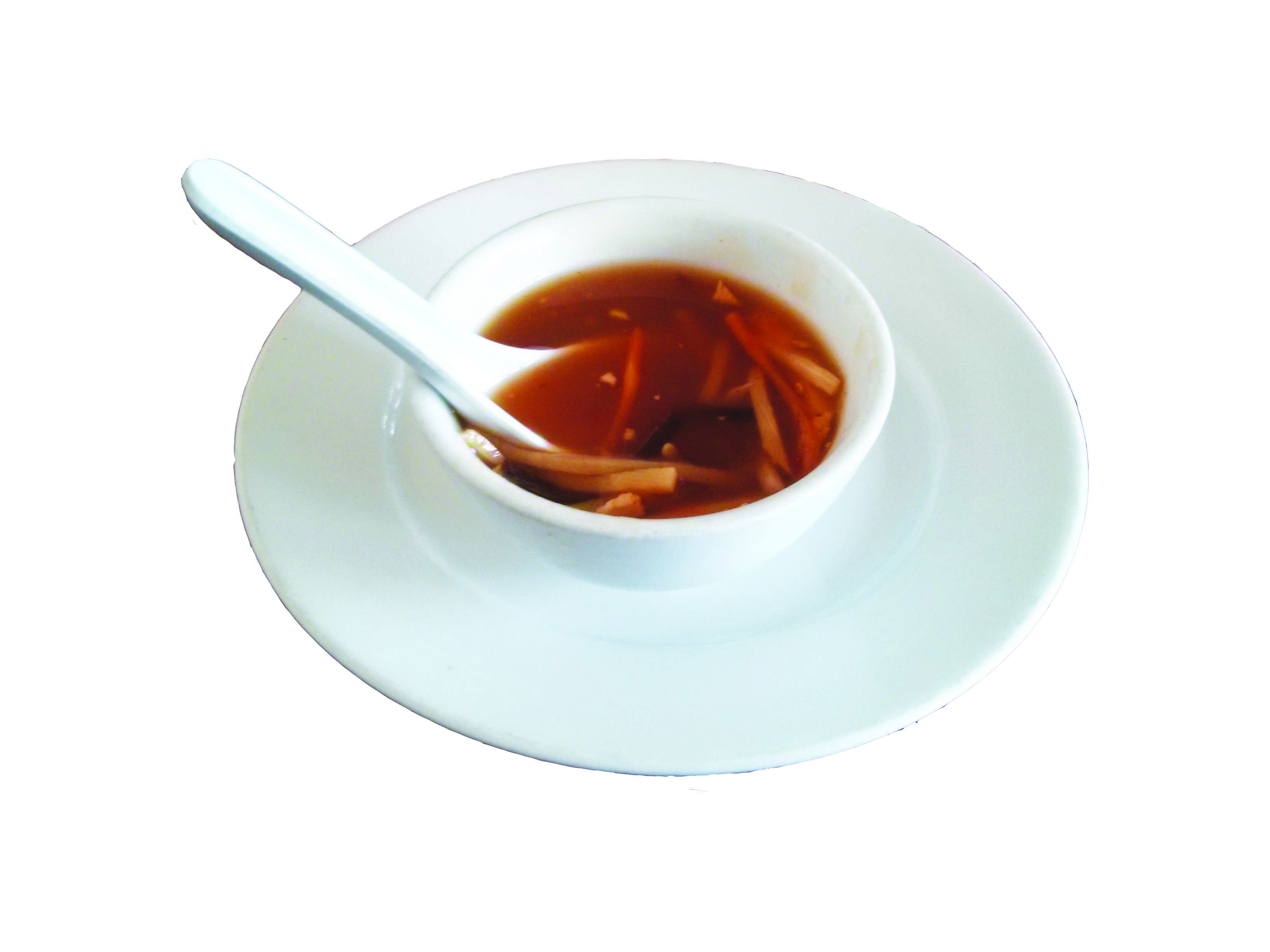 The hot and sour soup came out with a simple presentation. The dish was a deep nut-brown broth steaming in a clean white bowl, with thin slices of tofu swirling around, mixed with pieces of carrot and ribbons of caramelized onion. Giving off a scent of soy and chilis, the smell singed my nose even before I ate it. True to its name, the dish was very spicy, even though we asked for mild, I still found myself drinking water in between every two or three sips. The spice added more depth of flavor, and gave a salty tang. The carrots and tofu pieces were overwhelmed by the soup — their main purpose was to change up the soup’s texture rather than add a unique taste. While most soups rely on meat to add an extra depth of flavor — serving a vegan soup clearly required the chef to create that same depth of flavor in a different, more creative way.

The basil tempura, consisting of soy chicken and assorted vegetables with a light sauce, was presented in aluminum foil, making the dish look amateur. The brown of the caramelized onions combined with the brown of the mock chicken overwhelmed any other color on the plate. When I opened up the foil, I was hit in the face with the smell of meat — if I hadn’t looked at the dish, I wouldn’t have been able to tell there were any vegetables at all. The soy chicken was hard, chewy and meaty, overwhelming the taste of any basil or other vegetable. One of the few elements I liked was the sauce — it was tangy and spicy, and added an extra level to the otherwise basic dish. If a dish is going to be vegan, it should be vegan in a creative way. Taking a common meat dish and turning it into a soy meat dish isn’t intriguing.