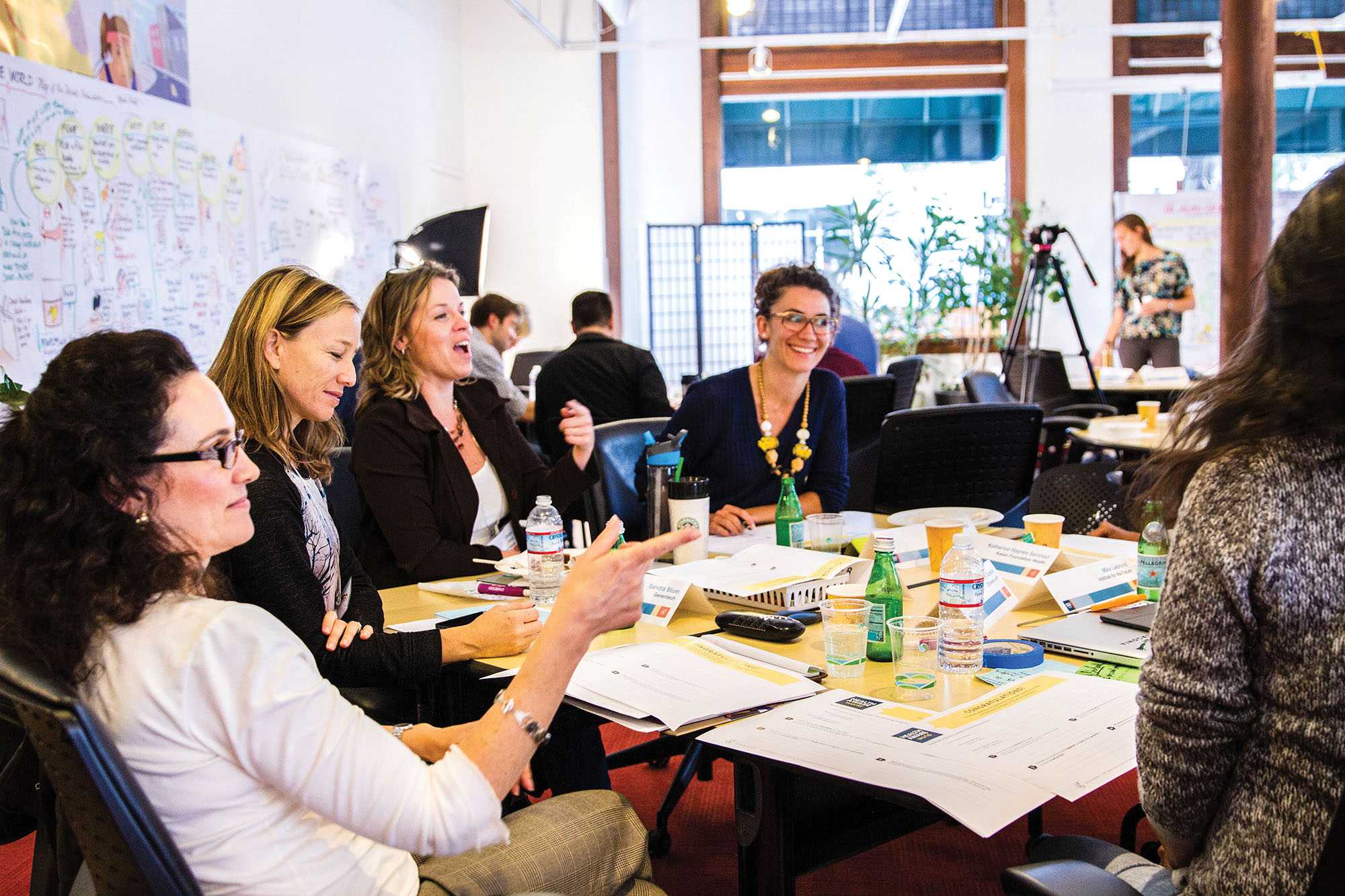 Gizmos and gadgets hang floor-to-ceiling, towering over displays of genetically modified fluorescent fish, test tubes and drones. Forget Trader Joe’s — this is Trader Gene’s: a quaint pharmacy-like shop that sells “46 and We” biological compatibility tests and pills that change your sex for a day. Well, it’s a possible scenario of the future, at least.

Housed in a sunset-orange building on the corner of Hamilton Avenue and Emerson Street, the Institute for the Future is a non-profit think tank that works to provide organizations with foresight for their changing industries. With a team of professionals in the social sciences, public policy, technology and design, IFTF scouts out and researches the newest innovations, or “signals,” from around the globe. These signals are then developed into maps of alternative scenarios, 10-year forecasts, and ultimately, a deeper understanding of how present-day decisions trigger long-term consequences. 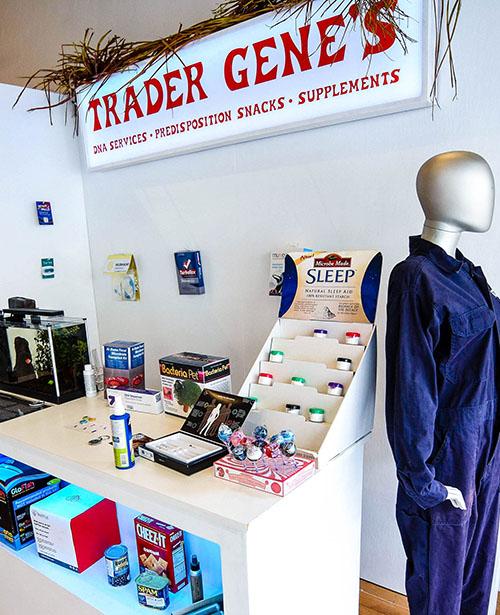 Trader Gene’s, a mock-up of grocery chain Trader Joe’s, is an IFTF display that simulates what an in-store shopping experience could evolve to in a few years. Photo by James Poe.

Displays like Trader Gene’s, for example, explore the consequences of knowing too much. In a futuristic world of being able to identify every health issue you’re possibly at risk for, there emerges an idea of “prehab,” or checking yourself into a rehab facility before even experiencing any actual problems.

“Our goal is to get everyone thinking about the future and to be more proactive rather than reactionary,” says program manager Andrew Keller.

Building upon a large database of information, the institute utilizes community surveys, expert gatherings and interviews to identify trends in areas such as politics, cuisine, agriculture, education and journalism. After almost 50 years of doing this type of research in Middletown, Connecticut, IFTF moved its headquarters to Palo Alto in 2014 with the hopes of becoming more cognizant to the public. Quirky indoor displays are just one manifestation of this, acting as a means to immerse visitors into potential scenarios of what the future may hold in store.

“The easiest way to get someone to imagine what the future looks like it to visualize it through art and storytelling,” says executive producer Jean Hagan.

Other efforts consist of hosting events such as book talks, conferences and gallery tours.

“Part of our mission is we want to engage with the public more,” Keller says.

But despite efforts to increase outreach, big companies remain IFTF’s main audience. In 2016, for example, they partnered with the ACT Foundation to help them gather insight on the future of test-taking.

“They understood that in the future, their testing metric may go away, so they came to us to help them think about that long-term future,” Hagan says.

Learning is Earning, the brainchild of their operations, is a simulation game in which players navigate life in the year 2026. In this imaginary world (which may be more realistic than we realize), learning earns you currency called “edublocks” which are tracked and traded through a platform known as “The Ledger.” These edublocks are not only traded in exchange for services, but also indicate skill levels that employers analyze when looking to hire. 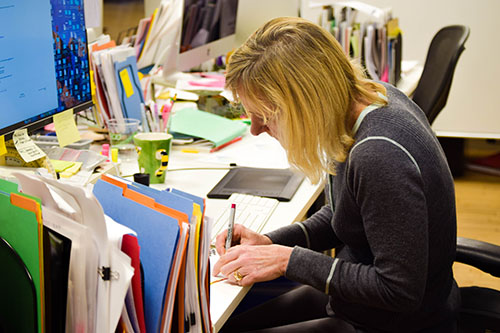 Art director Robin Bogott writes a reminder to herself at the end of a long work-day. Photo by Ashley Hitchings.

Players are also able to employ “positive imagination” and “shadow imagination” cards, allowing people from around the world to input what benefits and consequences they think might result from a futuristic scenario like this. Kind of like sci-fi role-playing.

Other projects include collaborations with the city of Palo Alto. In order to draw more attention to the constantly developing world, the two groups have held urban interventions in which artists gather and revitalize dilapidated alleyways with artwork, LED lights and interactive displays.

“Artists are futurists,” Hagan says. “Art is a vision of what could be. There has to be creativity about the future.”

But IFTF isn’t doing all of this research to predict the future. No one can. And they’re not planning on developing any applications for consumerism either. Instead, their tangled spider web of scenarios is meant to guide companies in plotting out long-term plans. This means determining how companies can adapt to, utilize or even avoid potential scenarios that may arise from the rapid advancement of technology.

“A lot of people feel organizations and government steer where things are going and feel powerless to change, like a little piece in a big puzzle,” says Susanne Forchheimer, IFTF engagement manager. “Being aware is the most important thing. Change happens when even single individuals take action. We provide them with the tools to really think about the future.”

Aiding companies while empowering individuals to forge a better future – that is the mission of the Institute.

“We’re going into this future together,” says Forchheimer. “How can we make it better?”