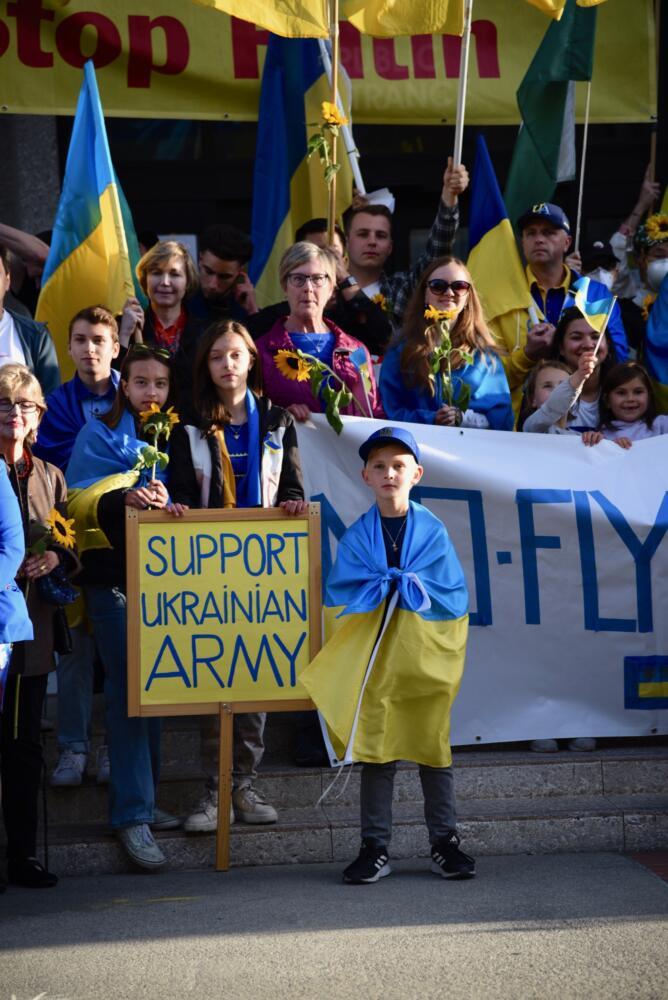 PROTESTORS FOR PEACE –– Protestors at a rally in Redwood City pose for a group photo. Diana Lutska, who is Ukrainian and can be seen holding the wooden sign, spoke at the gathering. "This will change the course of history," Lutska said. "And I think that we should all try to make an impact. We can just talk to our friends, talk to our family, inform people of the actual news, not the fake news that Russia is spreading. We need to spread awareness and support Ukrainians support Ukraine. You can send money, speak out." Photo: Sebastian Bonnard

“I didn’t go outside, apart from school. I was just stuck in the news. The whole time.”

Palo Alto High School senior Dmytro Krayilo takes a short, sharp breath as he recounts his whereabouts on Feb. 24, the day he learned that Russia was invading his homeland Ukraine.

“I found out at 7:40 p.m. It was on a Wednesday. I was finishing up homework, and I was going to go to the gym,” Krayilo said. “I found out and … for a solid four days I couldn’t do any homework.”

On the eve of the invasion, a high-precision missile struck an airfield in Ivano-Frankivsk, as confirmed by The Guardian. Videos of the attack were soon widely circulated on social media, and became the first of countless that Krayilo would watch. He said he felt an instant fear for his aunt, who lives in Ivano-Frankivsk, but also for what was in store for the future of his homeland.

“I wasn’t sure whether the city was getting bombed or … what was happening,” Krayilo said. “That was worrying.”

After a decade of tension following conflicts in Crimea and the Donbas, Russia invaded Ukraine, a Eastern-European country of 44 million, on Feb. 24 –– an invasion labeled a “special military operation” by Russian President Vladimir Putin.

Soon after, high-powered missiles struck Kyiv, Kharkiv, Odessa and other cities as Russian troops cascaded into Ukraine from the Russian and Belarussian borders. With the world stunned by the escalation that brought war to Europe for the first time in 70 years, many looked for answers for the brazen invasion that many experts regard as an act of Russian irredentism.

“It’s about Ukraine attempting to transition to liberal democratic values when Putin wants the states around Russia to be autocratic,” Kathryn Stoner, a senior fellow at the Freeman Spogli Institute and political science professor at Stanford, said. “Putin is pulling down an iron curtain in Europe again.”

Ever since the dissolution of the Soviet Union in 1991, Ukrainians have valued their sovereignty and democracy, resisting Kremlin influence and growing increasingly pro-West.

“Ukraine continues to look to the west for its future, not to Russia,” Stoner said. “That also includes a pretty robust … democracy in Ukraine, and there’s a demonstration effect.”

Spearheaded by defiant President Volodymyr Zelenskyy, and with martial law prohibiting males of ages 18-60 from leaving the country, Ukrainians have volunteered to defend their country en masse.

The images of missile-battered cities and fleeing Ukrainians sparked protests around the globe, reaching the Bay Area with demonstrations in Palo Alto, San Francisco and San Jose.

For Ukrainians in the Silicon Valley, the conflict in their home country has affected them beyond rising commodity prices: fearing for relatives and friends as well as Ukraine’s independence, the uncertainty of the war takes its toll.

“Looking at the map, and what’s been taken, Russia has already lost the war,” Krayilo said. “They can’t win. They can at most get the dead cities that have been bombed into ashes. That is their best outcome. Ukrainians still haven’t won the war, but from my perspective, it seems like that’s where they’re heading … They are putting up an insane resistance.” 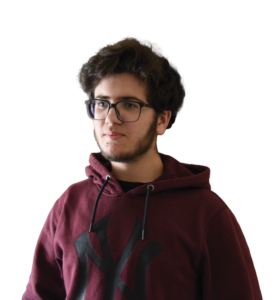 While visiting family in western Ukraine in April 2021, Krayilo attended school in Lviv for eight months when the borders closed due to the coronavirus pandemic. Though he returned to Palo Alto in January of 2021, all of his extended family still lives in Ukraine.

“They are serving in the outposts to control people coming in and out of the city. So they didn’t go full-on fight[ing],” Krayilo said. “If the war ends up going to Lviv, they are going to be there with guns.”

Like many Ukrainians, Krayilo said he believes NATO should do more to help the Ukrainian resistance but understands their limitations.

“Yesterday alone, a maternity hospital was bombed,” Krayilo said. “They [Russian army] just killed the next generation of the people of a nation.” 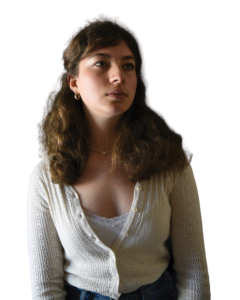 For many Ukrainian-Americans like senior Madison Abbassi, maintaining optimism has been difficult. However, Ukraine’s president has provided hope by staying in Ukraine and leading his country’s resistance to the Russian invasion.

“Zelensky is incredible,” Abbassi said. “He had the opportunity to leave Ukraine but said, ‘I don’t need a ride, I need more ammunition.’ He’s been the perfect symbol of resistance.”

To Abbassi and her family, the conflict between the two countries was unexpected, since ethnic Russians and Ukrainians often live alongside each other in Ukraine — 18% of the Ukrainian population is ethnically Russian, according to the CIA.

“There’s a very unique relationship between Russia and Ukraine,” Abbassi said. “It’s very much like sisters and brothers, cousins, wives and husbands.” 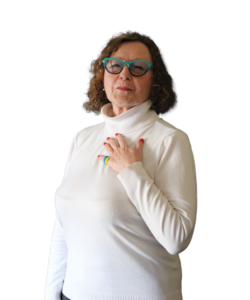 Paly grandmother Natalie Shinsky, who was born in Donetsk — a territory now controlled by Russian-separatists — said she was surprised by Putin’s invasion.

“[Though] members of my immediate family since who have been in the US since Putin’s invasion of Donetsk in 2014 were worried, my distant relatives in Kyiv were pretty calm, and believed that Putin was just bluffing,” Shinsky said.”

Shinsky said though her family has been fortunate to escape Ukraine earlier this year, many others have not been so lucky.

“Thank God, they were able to escape from Kyiv first to the Mukachevo, [a] small town on the West border of Ukraine with Hungary, then to Hungary, and Austria, where they have some friends,” Shinsky said. “Not everybody has this opportunity.”

Despite a united front, fear of Russia’s manpower has made Ukrainians uncertain of where Putin will stop.

“I know that nobody wants World War III, but I’m afraid we are already in it,” Shinsky said. “I don’t see Putin stopping at Ukraine.”

“‘Glory to Ukraine and its people!’ My older sister …  told me today with tears in her voice, that she didn’t know she loves Ukraine that much. Putin’s invasions really united Ukrainians as a nation.”

Junior Natalia Trounce has distant relatives and many friends in Ukraine and Russia, and though some have managed to get out of Ukraine, others have not left.

“When the news first went out my mom, my grandma and my grandpa were all calling them [Ukrainians] and asking ‘Can we send you money? … come here, we’ll help you,’” Trounce said.

Trounce knows of a Ukrainian family that was able to cross into Slovakia right before Putin launched a full-scale invasion of Ukraine.

“I think it [the war] began at 5 a.m. And one family that we know got out at 4 a.m.,” Trounce said. “They probably know people high up … and got the heads-up that something was going to happen. ”

Trounce and her family, including her Russian grandparents who reside in Palo Alto, have felt the effects of a war thousands of miles away, and have been anxious ever since the conflict began.

Explaining that many Russians have homes in both the city and country, Trounce recalled a saying about strife, betrayal and resilience.

“When times get rough, Russians just go to their villages and plant potatoes,” Trounce said. “Because they know that [at least] the … ground will never turn against them.”

“It’s definitely scary because you hear all about these wars like [in] Afghanistan but you don’t really feel connected to them because you don’t know anyone. But now it’s closer to home.”

“Before the war, we were helping orphans, street children, refugees, because the war has been going on for many since the 2014 invasion of the Donbas,” Kiessling said. “And when the recent war started, we had to let go of our long-term programs and help children more urgently in Ukraine.”

The sudden outbreak of war forced orphans in Kyiv to hide in cellars during Russian shelling raids, according to Kiessling. With the help of SafeUkraine, an organization dedicated to helping Ukrainian refugees, the children were able to evacuate the capital after a week of hiding.

“At that time they heard sirens upon sirens, got on the train, and made it to Austria with their guardians,” Kiessling said.

To mobilize help from the local community, Kiessling organized a collaboration between kleine herzen and Neighbors Abroad, the latter of which she is the vice president. The two organizations have since been raising funds to provide food and necessities to Ukrainians in Odessa and Kyiv.

“As we saw the war unfold, we were completely shocked and immediately wanted to start this partnership, which has to the day brought in $54,000,” Kiessling said.

Nova Ukraine, a non-profit based in Palo Alto and created by a group of Silicon Valley expatriates in 2014, provides humanitarian aid to those in Ukraine. Since the start of the war, Nova Ukraine has quickly gathered donations to send emergency supplies to its distribution center in Lviv.

“We collect money here, buy medical supplies, and as a tech company, we try to do it smart,” social media lead Olena Tomkiv said. “We have a group of volunteers that go across Ukraine and they deliver these medical supplies directly to affected areas.”

Hromada, a nonprofit that publishes a monthly, eponymous Ukrainian newspaper, has a network of distributors in the U.S. and Ukraine that provide relief funded by donations, according to co-founder Nataliya Anon.

“Since the [war] started, we really figured out that our charitable component is the most important now,” Anon said.

Though charitable work helps many Ukrainians, Anon said she would like to see more urgency in U.S.’s political response.

“Please remember that Ukrainians cannot win this war alone,” Anon said. “All Ukrainians and the U.S. should be shouting, demanding, chanting, pleading for [safe] Ukrainians skies because they are indiscriminately bombing Ukrainian children and civilians, and there’s no place for that in our day and time.”