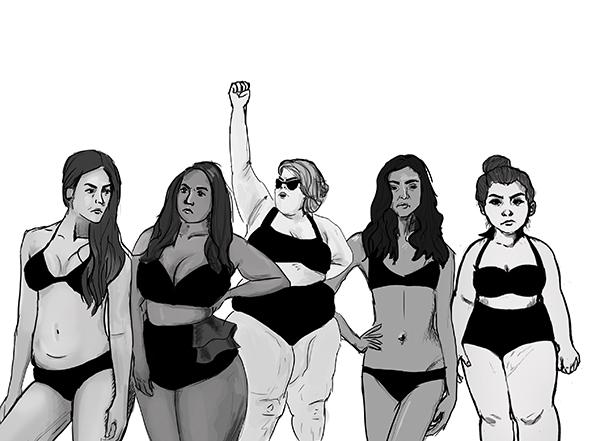 Every Body is a Bikini Body: Being “healthy” is not a pre-requisite for self-love

As summer nears, I, like many other girls, begin to ready myself for bikini season. Some of the aspects of my preparation are similar to the average girl’s: I break out my razor from hibernation, find my bikini underneath a pile of forgotten summer clothes and whip out my SPF foundation.

But that’s honestly where the similarity ends. While other girls are doing five minute workouts, drinking kale smoothies or trying out the newest diet, I’m bracing myself for what’s to come. Because if you’re a fat girl in a bikini, you’re in for a lot of crap.

On the beaches, on the pool deck, near other bodies of water, people won’t hesitate to tell you that you “don’t necessarily have a bikini body.” Because according to them, in order to wear a functional piece of swimwear, you have to fit a certain image.

But society’s obsession with the thin and sexy stretches far past bikini season. According to a study by the Schools Health Education Unit in 2013, girls begin to worry about their weight starting at age 10. I’m one of those millions of girls.

It has been a struggle for me to love my body. That journey was hard, but what comes next is harder. Because being fat with self-love? Society is not OK with that.

So here we are. I’m fat, I’m pissed and I have a really cool bikini. Regardless of what the scale says, regardless of the doctors and regardless of the thinspiration blogs, you don’t have to be in perfect “shape” all the time. Being in shape is not a prerequisite for not hating yourself. If you love your body and wear what makes you happy, then you’re healthy. Because hating yourself? That’s definitely not healthy. If you also want to lose weight, that’s OK too.

I’m fat ­­— not just curvy in the right places — and in today’s day and age, fat isn’t beautiful. To me, fat is just a way to describe my body and my weight. It doesn’t mean I’m ugly, it doesn’t mean I’m out of shape; it means I’m overweight, and that descriptive fact should not be derogatory.

I love my body, but that fact is the issue that causes the most contention. When I tell people that I’m OK with the way that I look, they’re shocked. They try to talk me out of it. Because while people may spout  “self love,” they still do not like fat.

Oftentimes, people’s unwillingness to accept overweight people comes from concern about their health. People think that if a fat person hates their appearance, they’ll be more motivated to lose weight.

And while fat women may be more likely to have certain health risks, those risks are exacerbated by society’s prejudice against fat people. According to an article published by CNN in 2010, studies show that women get lesser quality medical care if they are 20 or more pounds overweight. And when 70 million American women are overweight, it’s a big problem.

For example, researchers at Rice University and the University of Texas found that as a patient’s weight increased, doctors reported wanting to help their patient less.

“Our culture has … negativity toward overweight people, and doctors aren’t immune,” Harvard Professor Jerome Groopman says to CNN. “If doctors have negative feelings toward patients, they’re dismissive … and it can cloud their judgment.”

It is plain and simple: society needs to stop telling fat women to hate themselves. The inherent health risks that people seem so concerned about when I tell them I like my body don’t come from my acceptance of myself, but from the fact that others can’t seem to accept me. And sure, maybe I do have a higher risk of getting diabetes, but that doesn’t justify body shaming.

This summer, when I’m spending time at the beach, I’ll wear my bikini with pride. Once you accept your body and love yourself, the rest will fall into place.