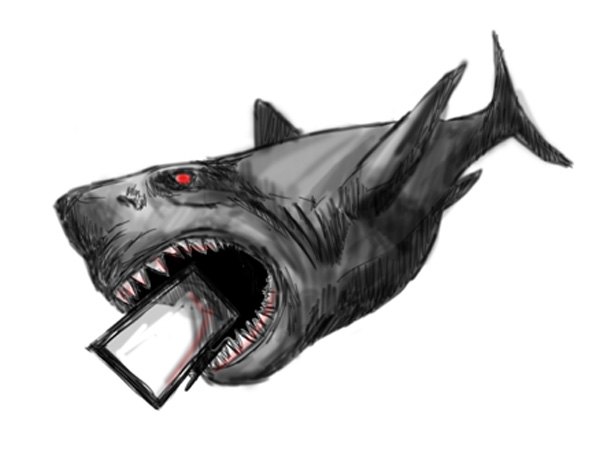 Educational television must stick to its claimed purpose

The Discovery Channel betrayed audiences when it aired a program claiming that Megalodon, a shark that has been extinct for 1.5 million years, may still exist. Art by Anthony Liu.

Imagine a 60-foot-long, 60-ton, whale-killing monster with 9-foot-tall jaws more than 10 times stronger than those of an alligator.

This horrific creature, a monstrous prehistoric shark named Megalodon (literally meaning “giant tooth” in Latin), has been extinct for 1.5 million years and has inspired awe and fear through findings of its fossilized hand-size teeth. Although this beast is awesome to envision, virtually all scientists accept Megalodon’s extinction as an irrefutable scientific fact.

However, the Discovery Channel abused this reality when it aired a “documentary” on the increasing “evidence” that this long-lost shark still lurks in the ocean, even though no actual scientific proof exists to support this ridiculous claim.

The special, titled “Megalodon: The Monster Shark That Lives,” kicked off the channel’s popular August week of programming dedicated to sharks, dubbed “Shark Week.” It claimed to follow marine biologists on a hunt for the extinct shark, using CGI graphics and actors that fooled audiences into believing the hoax.

The documentary betrayed the educational credibility of the Discovery Channel. Its slogan, “The World is Just Awesome,” seems to suggest that the channel provides entertaining content that teaches about the wonders of the world. A show about Megalodon would fit this claim, but the false way that the channel presented the material abandoned any educational purpose.

The Discovery Channel’s audiences trust that it is a source for quality educational material, so when the channel betrays that trust it loses itself valuable viewers.

Adding to its offense, the Discovery Channel did not even warn viewers of the documentary’s fictional nature until after the two-hour show ended. A brief disclaimer flashed across the screen: “Though certain events and characters in this film have been dramatized, sightings of ‘Submarine’ [Megalodon] continue to this day. Megalodon was a real shark. Legends of giant sharks persist all over the world. There is still debate about what they might be,” the disclaimer stated.

Not only does this disclaimer not directly admit that the documentary bases itself on falsehoods, but the placement of the disclaimer at the end of the show put viewers in the position to be duped by the lies.

Christie Wilcox, a PhD candidate in cell and molecular biology at the University of Hawaii who has written posts addressing this issue on her blog, Science Sushi, lost all trust in the Discovery Channel after this fake documentary.

“They didn’t let their audience in on the joke,” Wilcox says.

To make matters worse, the Megalodon episode received the highest ratings ever for a Shark Week special and succeeded in convincing over 70 percent of voters in a poll on the Discovery Channel’s website to vote, “YES! The evidence for Megalodon can’t be ignored. This monster shark lives.”

Unfortunately, it appears that the Discovery Channel feels that lies and deception will  increase its viewership when it should entertain and hold audiences with legitimate and scientific material. Portraying science in a false and deceitful manner does it an injustice.

So-called “mockumentaries,” intentional depictions of legends in a creative light, can be okay if they warn audiences of their fictional nature beforehand. When a channel that claims to provide viewers with scientific fact airs a program that abandons science and truth, the fun goes too far.

“We hold our educational channels to a higher standard because we know that they’re supposed to be telling us the truth,” Wilcox says. “If we found out our news programs were lying to us, we’d be really pissed.”

Sadly, this issue of an “educational” network airing misleading material has turned into a trend that extends far beyond the Discovery Channel.

Other channels owned by Discovery Communications such as TLC, the History Channel and Animal Planet, have received criticism from scientists, educators and general audiences for airing false or misleading information.

TLC originally stood for “The Learning Channel” and was sponsored by the government in an effort to increase educational content shown on television. Now, most know the network for its ditzy reality shows like their runaway success “Here Comes Honey Boo Boo.”

Last year, Animal Planet aired a documentary claiming the potential existence of mermaids. Last Spring, the channel aired a follow-up show titled “Mermaids: The New Evidence.” Though the series had disclaimers, it still managed to convince some viewers.

This transition to non-educational material in recent years likely stems from increased competition between commercial channels. Unfortunately, educational channels often find it difficult to compete with the more than 1,700 television channels in the USA.

It is crucial for educational television to survive because it is the modern media. It provides easy access to factual information displayed in an appealing manner. It allows those without extensive educational backgrounds to learn about the world.

For children, watching television can be one of their first educational experiences.

“Educational channels have an important role, especially for children, as a source of wholesome, quality content that the kids can watch and get really inspired about the world around them,” Wilcox says.

A channel publically funded as educational holds an obligation to its funders to stay consistent. For a privately-funded channel, the rules loosen up. Still, viewers deserve clarity on where a channel stands between fact and fiction.

“People just need to be more aware that not everything they’re seeing on TV — just like the Internet — can be trusted,” Olah says.

Thankfully, Discovery Communications is not getting let off the hook. According to Wilcox, many of her colleague scientists have been turning down offers to work with the Discovery Channel.

“People are saying … ‘We don’t want to work with you because we don’t know what you’re going to do with it [any scientific information we provide],’” Wilcox says.

In addition, the Discovery Channel’s Facebook page overflowed with negative and accusational comments in an immediate response to the Megalodon scandal.

We consume educational information every day, and for many of us much of that information comes on a screen. We deserve to know the factuality of what we watch. The future of scientific television must not follow the precedent set by gag shows like “Megalodon.”

People must stay aware of what constitutes fiction and what they can trust. We all love to indulge in reality show drama, but educational television must keep its credibility and not allow these guilty pleasure shows to spill into their realm.

Many legitimate educational channels do still exist, including Public Broadcasting Service, National Geographic and the Science Channel. Hopefully, by choosing to watch the channels that do education right and avoiding the ones that don’t, audiences can pressure the unfaithful channels to work towards regaining their educational value and trustworthiness.

Until then, you won’t find me wasting my time watching programming that disrespects science and education.