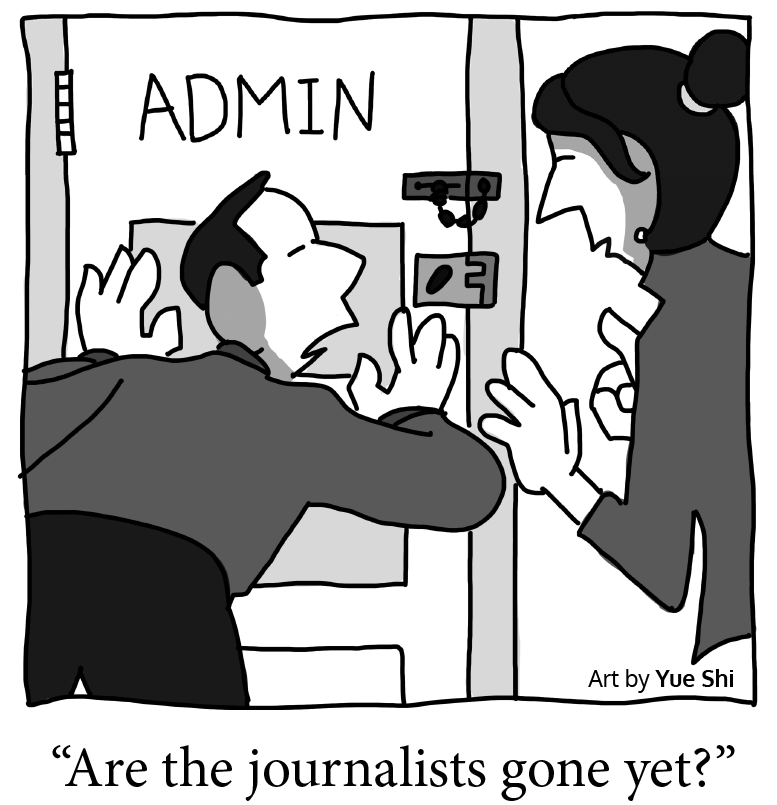 As a magazine that focuses on school issues, our staff often finds it necessary to reach out to the administration of Palo Alto High School and the Palo Alto Unified School District to attain information, often in a hurry. However, over the past year, we have found that administrators evade, postpone or do not answer our questions.

Many times, our staff members have sent emails to administrators, only to receive a reply from an assistant or no reply at all, while previous administrators went out of their way to speak to students.

This experience is not only limited to Verde Magazine staffers. Student journalists from The Paly Voice and The Campanile and other Paly publications have also had difficulty reaching the administration for their reporting.

However, over the past year, we have found that administrators evade, postpone or do not answer our questions.

“We would have a lot of trouble contacting certain administrators and we would have to chase them down for a bit,” former Editor-in-Chief Ethan Nissim said. “It would take a really long time and we would often end up having a bunch of people sit down with them at once wherever we could get them and just doing three to four interviews right then.”

The difficulty faced by journalists in interviewing administrators is also exemplified by our attempts to contact the administration regarding this editorial. We emailed Principal Adam Paulson and each of the assistant principals asking for interviews.

While three of the assistant principals did not respond, Assistant Principal Berkson and Paulson both replied the same day. Berkson was unavailable and Paulson asked us to schedule the interview with his assistant, stating “I will make time for you.” However, his assistant was out of the office. Verde then wrote to Paulson again, asking to schedule the interview directly with him.

Six days later at the end of our production cycle, we had received no response from either Paulson or his assistant.

Another issue student journalists have faced is the 24-hour policy which was enacted first semester. Many staff members have been told that administrators will not respond to their emails within 24 hours of receiving them. When it comes to breaking news stories, this policy delays our publication and prevents us from doing our jobs.

When emails do receive replies, administrators usually ask for our questions in advance. Although it may not be immediately evident, this policy can also have a detrimental effect.

If we have to stick to only the questions we have prepared, we lose the opportunity to ask follow-up questions or follow a lead we had not previously known about. Sending the questions in advance also allows administrators to prepare answers ahead of time. This policy also does not establish an explicit climate of trust and transparency.

We have also noticed that administrators are more likely to accept interviews about topics not directly related to themselves or that are not controversial.

However, they are less likely to respond when the story regards a controversial subject that may not paint the administration in the most positive light.

We recognize that, in such a large high school, it can be difficult for administrators to find the time to participate in interviews. We commend the administrators for providing robust interviews when they do make time for them.

For example, recently, Paulson gave us a lengthy interview for stories regarding changes to the bell schedule and the hiring of new administrators. Berkson is also generally prompt to reply to journalists’ emails. The administration has also become more accommodating throughout the year but serious problems still linger.

As student journalists, we try to adhere to the National Student Press Association’s Code of Ethics for High School Journalists, the seven principles of which are listed on the Verde Magazine Website. Three of those are “Be Honest,” “Be Fair” and “Be Accountable.” To succeed in all of these endeavors, the ability to speak openly with administrators is vital. We attempt to get opinions from all sides of issues and facts from those who are directly involved in the topics we report on. An inaccessible administration prevents us from successfully doing this.

We attempt to get opinions from all sides of issues and facts from those who are directly involved in the topics we report on. An inaccessible administration prevents us from successfully doing this.

Therefore, we ask that administrators reconsider their attitudes regarding student journalists. We believe we all have the same goals to keep the student body informed, and we must work together to provide students and the community with the highest quality information possible.