Dreaming of a bright Christmas: The community behind Christmas Tree Lane

Every year on the second Saturday of December, the smell of hot chocolate and baked goods waft out of the homes of Fulton Street as residents gather together to unravel lights, inflatables and decorations of every sort.

Fulton St., informally known around this time of year as “Christmas Tree Lane,” has been an establishment in Palo Alto since 1940. Every year without fail, eager Palo Altans and carolers flood the street, admiring and taking photos and videos of each display. 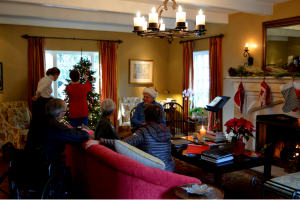 Residents of Christmas tree lane gather on the second Saturday of December to chat, enjoy brunch, and kick off decorating as is tradition.

“We get several people thanking us every year for the street, because it’s a part of their family tradition to come down here,” says Jon Ward, who has been a resident of the lane for over 20 years.

Despite the large audience the street attracts, little is known about the behind the scenes effort that goes into creating unique displays for each house. Colleen Backstrand, another longtime resident, has been participating in the extensive decorating tradition for a long time.

“The idea is that every year… everyone has their own themes and their own decoration,” Backstrand says.

However, Backstrand says that with each new family, new ideas and vibrancy are added to the street.

“Typically when you buy the house, you inherit the decorations that came with the house, but sometimes they’re older and sometimes you want to do something fresh,” he says.

This year, Jay Backstrand was working to set up the house with his 12 year old son William Backstrand, friend Bruce Nap, and his father, trying to cater to the theme of reindeer and skiing. This multigenerational scene is not uncommon, as families come together to help each other decorate their houses in a day.  William, eagerly helping in setting up the wires for the holiday lights, explains how the street tries to set up decorations as fast as possible.

“Everyone’s supposed to do it the day of [the second saturday]” William says. “So that no one drives by on Friday and it’s [only partly decorated].”

William has been helping decorate the house since he was young, and aims to continue to do so well into the future. Over the past few years, his family has been working to make their house interactive as well. 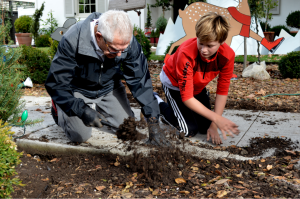 “Last year, we made a Christmas Tree where people could come hang up ornaments,” William says.

This creates an interactive aspect to the street, so citizens can not only walk around and take photos, but become immersed in the displays themselves.

One house in particular engages the audience, and has a special meaning for its owner, Judy Koch. Her decorations are inspired by the book The Night Before Christmas, and are custom-made by a set designer. As children approach, they can sit in the wooden sleigh and listen to the book being read aloud.

“Because I want children to learn to love books and love to read,” Koch says. “I love the idea of using themes of books to remind children.”

Despite the deep planning that goes into creating the extensive decorations of the street, most residents’ favorite part of this yearly tradition is simply just spending time with one another, as young adults fly back from college and adults fly back from their jobs to help their families maintain these customs, according to Backstrand.

“On the street, you really know everyone,” Backstrand says. “There’s this camaraderie and multi-generational community.”