Down in the Dumps Litter-ally: What Happens to Our Trash 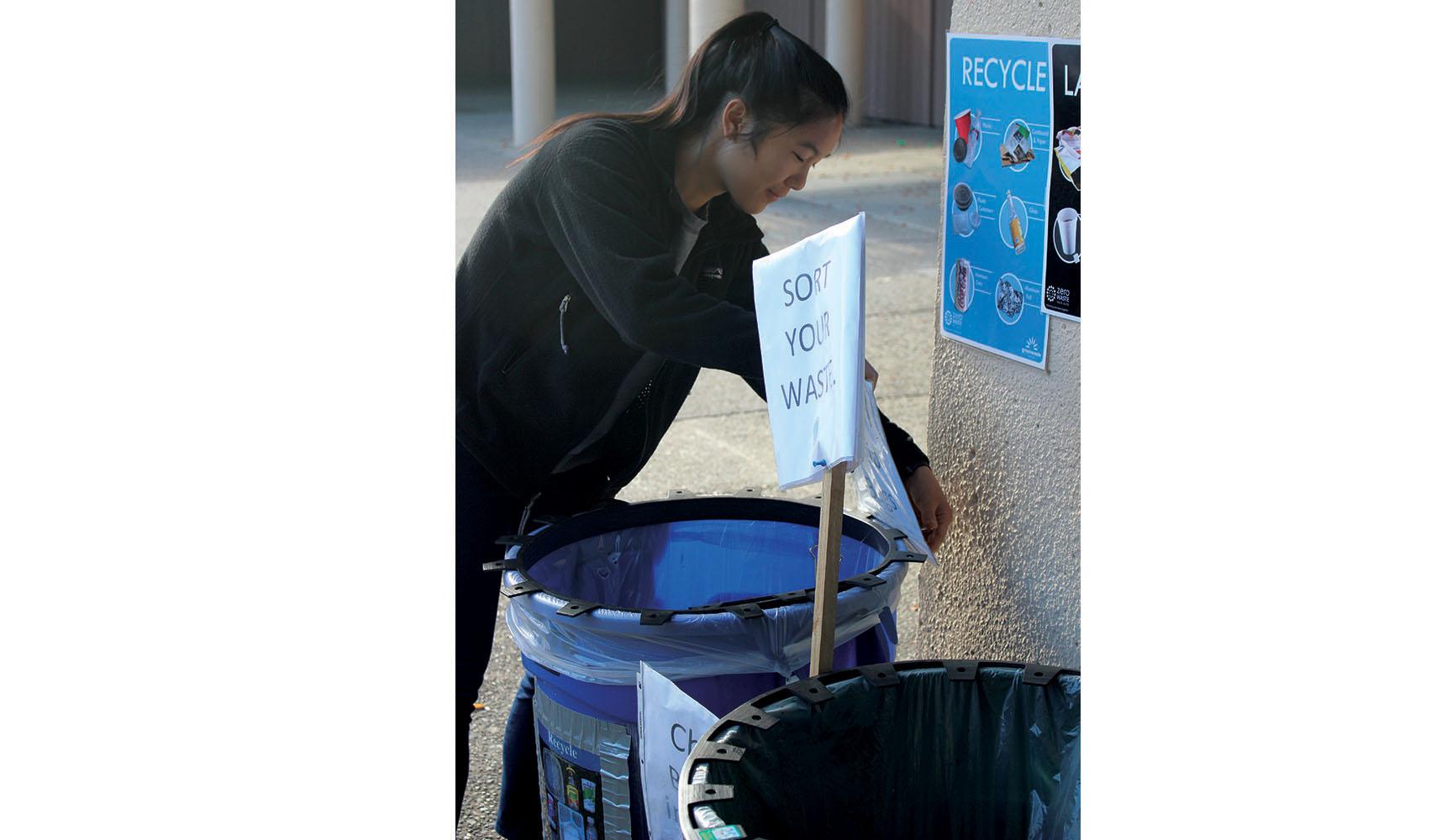 It’s lunchtime at Palo Alto High School and students are rushing back from Town and Country, arms laden with take-out boxes and soda cans. After finishing their meals, their waste is tossed into the nearest bin — if there’s one in sight.  Otherwise, some leave the remains of their lunches on the ground. The contents of the blue, green and black bins are indistinguishable: the recycling bin, full of chip bags, might as well be the trash bin. But who cares — it will all get sorted later, right? In reality, many mis-sorted items never find their proper homes. According to Paly custodian Regina Buckner, the custodians bagging up waste classify a bag as recycling, compost, or landfill based on what it contains the most of.

“If we have more compost in a [recycling] bag than recycle, we put it in the compost bin,” Buckner says.

“As soon as one person messes up and puts a chip bag in the compost bin, it’s like a sign that it’s OK for everyone else to do it,” says senior Olivia D’Arezzo, board member of Paly’s Zero Waste Club.

“As soon as one person messes up and puts a chip bag in the compost bin, it’s like a sign that it’s OK for everyone else to do it.”

“There is some sorting [at the facility], but not enough,” says Christy Resinger, Paly Zero Waste Champion and French teacher.

From 2007 to 2011, the Palo Alto Unified School District implemented Green Teams at schools to regulate the sorting of waste, and began to use the three-bin sort system in 2010.

“The Zero Waste Champion program was … started by the City of Palo Alto as a way to implement the new ordinance … that [states] we must sort our waste,” Resinger says.

The goal of the program, which began three years ago, is to reduce the amount of waste in schools throughout PAUSD to the point where waste will be negligible on campuses by the year 2021.

“[The] program is at each school, and the champion is a teacher or some type of staff … and they’re given a yearly stipend,” says senior Leila Tjiang, board member of Paly’s Zero Waste club. “Using that money, they’re also supposed to recruit students to help them … carry out projects that reduce waste on their campus.”

Resinger created the Paly Zero Waste club to help implement some of these goals. For the 2017-18 school year, the Zero Waste club hopes to educate students on how to better sort their waste. The club has been making waste stations with all three bins easily accessible throughout campus since spring of 2017.

“Wherever you see a trash can, there’s always a recycling and compost bin right next to it,” D’Arezzo says. “They’re connected, so there’s no situation [where] if you have a banana peel to throw away, you won’t just throw it in the closest bin, because they’re all equally close.”

Zero Waste Club sees a limited amount of positive outcomes resulting from the addition of signs at the waste stations.

“I think in order to really actually change anything, it would take … years, if not decades, to actually completely change people’s mindsets,” Tjiang says. “It’s one thing to educate people, but it’s another thing to get people to care about it.”

On April 1, 2016, the City of Palo Alto implemented the first phase of a three-phase recycling and composting ordinance.

The first phase affected the largest garbage producers, including hospitals and restaurants. The second phase, which was implemented on June 1, 2017, affected medium-scale waste producers such as office buildings. The final phase will take effect on Jan. 1, 2018, and will affect everyone including homeowners.

To enforce the ordinance, GreenWaste conducts Zero Waste audits at schools and businesses.

Since the ordinance was created, the amount of waste diverted from landfills to recycling and compost has increased.

“Palo Alto is at about 85 percent diversion right now, which is … really good for most cities.”

“Palo Alto is at about 85 percent diversion right now, which is … really good for most cities,” Cissna says.

He says the city’s new goal is to have 95 percent diversion by the year 2030.

It may be hard to believe, but younger students in Palo Alto appear to be better at sorting waste than most high schoolers.

According to PAUSD’s sustainability manager Rebecca Navarro, elementary schools have an advantage at sorting waste.

“Weaving waste sorting and not littering into the language that teachers are using is pretty natural at that age,” Navarro says. “They’re also young enough that they need constant supervision, so they’re never without an adult watching them and guiding their decision-making.”

Audits implemented at schools give green, yellow or red tags based on the amount of contamination in the bins. 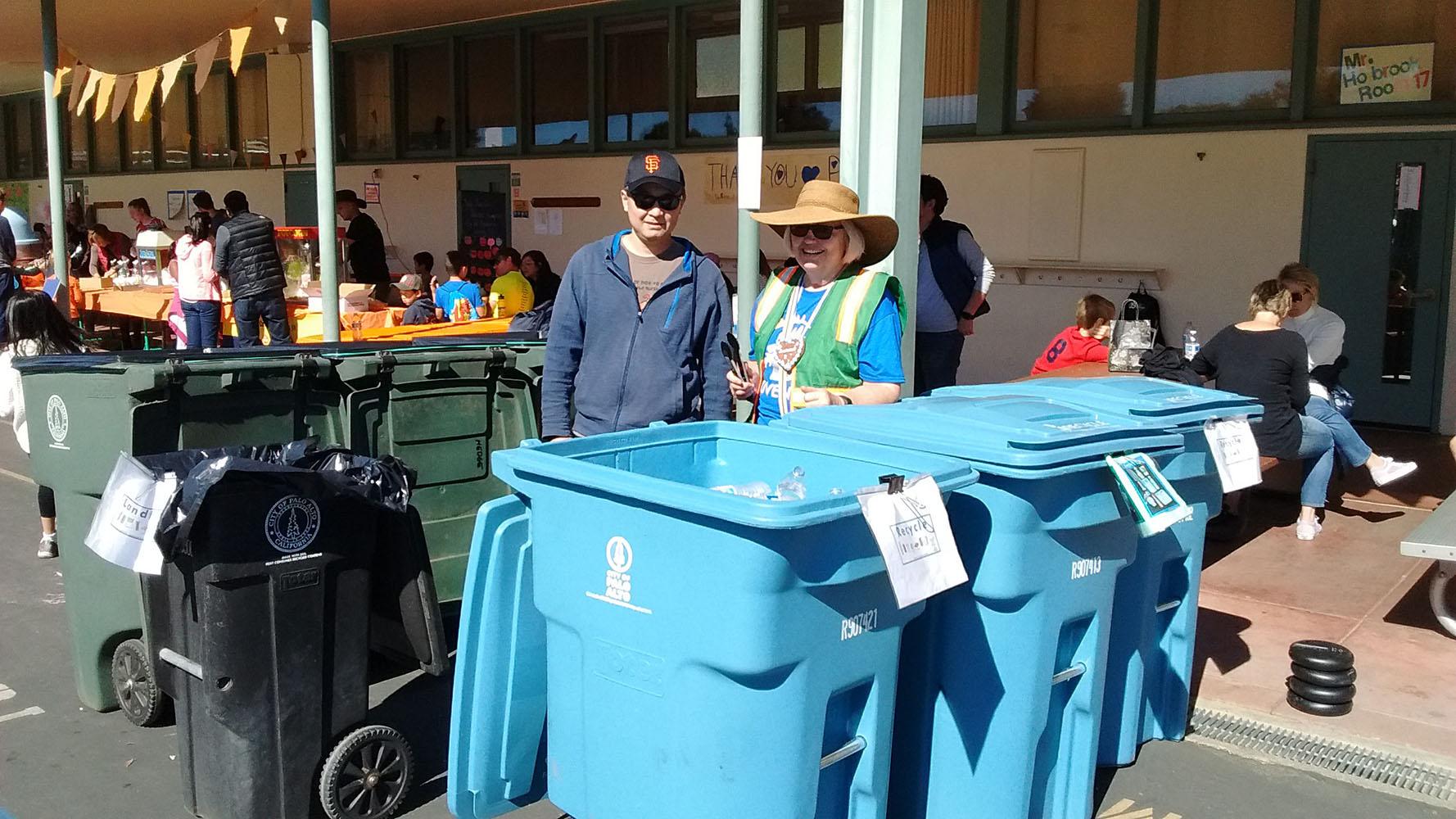 TALKING TRASH Zero Waste Champion Margaret Row helps people sort their waste at Duveneck’s Harvest Carnival in October. “At the end of the carnival [last year], there was just trash everywhere. … It was just a disaster. So this year [at] every big event we’ve had, I’ve run a station like this,” Row says. Photo by Maggie Cheung.

If a school obtains four red tags, it will be fined. The city hasn’t fined anyone so far, and the only school to get a green tag was El Carmelo Elementary School. Paly received a yellow tag.

According to Navarro, it is more difficult to enforce proper waste sorting at the high schools due to the sheer volume of people on campus every day.

Where our landfill goes

Garbage is sent to the Sunnyvale Materials Recovery and Transfer (SMaRT) Station. When it arrives, workers quickly pull out some recyclable and compostable items from a conveyer belt. The remaining garbage goes to a landfill in Morgan Hill.

Cissna emphasizes that sending waste to the landfill should be avoided whenever possible because of its harmful environmental effects.

Journey of the recyclables

Santa Clara County’s recycling goes to the Material Recovery Facility in San Jose, where 45 tons of materials are recycled every hour. 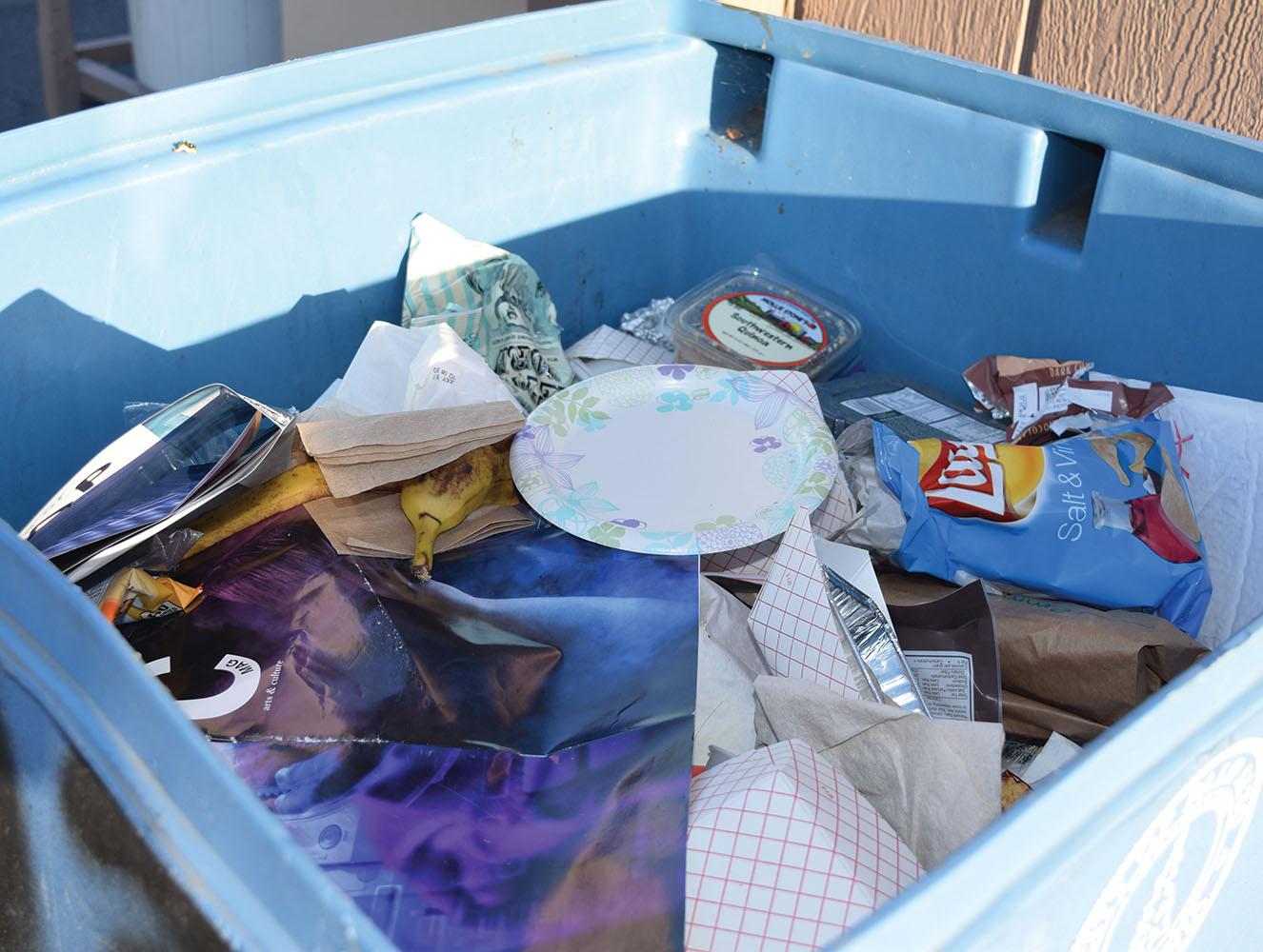 WASTEFUL SORTING A recycling bin on the Paly quad reveals compost and landfill waste mixed in with recycling. According to custodian Regina Buckner, recycling bins often have the most contamination. Photo by Cecilia Ward.

“It [recycling] goes to this bag breaker that has these spinning blades, and they rip open the bags,” Cissna says. “All those recyclables fall out, and then it continues on the conveyer belt, [where] there are some human sorters that are pulling out bulky items that might damage the machine.”

Following the initial separation, a machine removes cardboard from the flow.

“It [the machine] has these spinning discs that are calibrated to separate the cardboard. It [cardboard] just floats on top while everything else falls down below,” Cissna says.

The machines that separate glass and paper operate similarly.

Additionally, metals are picked up by large magnets spinning over conveyer belts.

Plastics pass through three machines that use lasers to separate various kinds of plastic.

“Depending on how much light comes out the other side of the plastic, it will either recognize it as plastic it wants to separate, or it won’t,” Cissna says. “If it recognizes it, it shoots a puff of air, and then that piece of plastic gets flung into a separate area.”

After separation, the recyclables are compacted into rectangular bales and sold to a company for reuse.

According to Cissna, compost and yard waste from Palo Alto goes to a Zero Waste Energy Development facility in San Jose, the largest in the world.

First, the compost goes through a sifting process that screens out large items, like tree branches. Afterward, trucks push the compostable material into long, sealed tunnels.

“They [ZWED] want the inside of the tunnel to go anaerobic,” Cissna says. “The bacteria is specialized in anaerobic conditions … they spread this bacteria all over the compost, and the bacteria is used to basically eat the compost.”

According to Cissna, this process takes about 22 days. Afterwards, the material is sifted and piled into the back of a semi truck to be taken to Z-Best Composting Facility in Gilroy.

At Z-Best, the compost sits out in the open for a few months, arranged in long rows called windrows where it will continue to be broken down into fine pieces.

The final product is a nutrient-rich, certified-organic compost that can be added to crops. Palo Alto residents can pick up free bags of compost at the Sunnyvale SMaRT station.

Changing habits is always a difficult process, especially when it involves an entire community; however, it is necessary to preserve our planet.