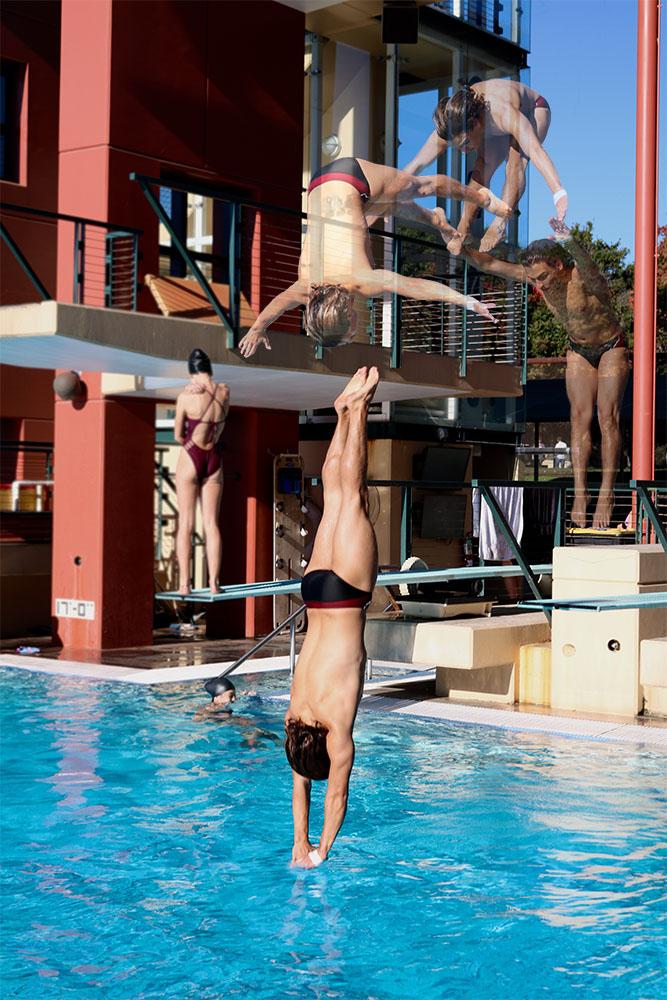 Photos by ABBY CUMMINGS and photo illustration by BEN COHEN

Diving with Ditto: one student’s journey to competitive diving

Just four years ago, senior Jeanpaul Ditto began as a novice diver and within two years of low-intensity training, he was competing at Junior Nationals, now nationally ranked 20th for dives off the one meter.

Although Ditto is considered relatively new to the sport of diving, his background in gymnastics, mainly tumbling, led him to try out for his high school diving team as a freshman in Carmel. A natural, he was able to pick up complex dives from the moment he put on his Speedo.

“I just honestly like flipping and the feeling of having that pit in my stomach where I’m scared and then after coming up from the water saying I conquered that fear,” Ditto says.

“[Flipping] is what motivates me to keep going: they really look cool and spinning fast is what I love to do.”

His passion for diving has taken Ditto as far as Atlanta for a major competition, where he competed 11 dives: six basic and five optional, harder ones.

“I went from being a high school diver … and within one year of diving with a club team at the beginning of my junior year, I was able to make it to semifinals at Junior Nationals,” Ditto says. “That is the best thing I’ve ever done.”

The journey to Ditto’s success has been challenging, however. According to Ditto, it was accompanied by obstacles prevalent in both practice and meets.

“During warmups for zones last year, I hit the board with my feet and had to warm up with hurt feet,” Ditto says. “And then this year I failed a dive at Junior Nationals off the three meter board and basically flopped into the pool.”

To avoid injuries like these, Ditto practices upwards of 12 hours per week to polish his entry into the water and general diving technique. In maintaining this rigorous training schedule, Ditto moved to Palo Alto for its proximity to Stanford Diving Club. Not only has it given him the tools to conquer complex tricks, Ditto says the club has even provided him with an upbeat environment and a valuable community.

“The local group of divers we have at Stanford Diving Club is very close knit,” Ditto says. “Many of us go to the same schools and are friends both inside and outside of the pool.”

These bonds even extend to Ditto’s coach, Ryan Wallace, who has been working with Ditto for his last two years.

“I remember an interviewer asking [Golden State Warriors coach] Steve Kerr one year the question ‘What is it like coaching Stephen Curry?’” Wallace says. “He said ‘[it is] electric and unbelievable what he does and is capable of still doing,’ and I feel the same way about [Ditto].”

With Wallace’s help, Ditto says he consistently improves with each new practice, whether he is training in a harness on dry land or falling off the 10 meter platform.

Even though Ditto had a late start in the sport, diving has still provided him with a multitude of future opportunities which include the opportunity to dive for Yale, which has a Division I diving team.

While college might seem like the end goal for some, Ditto says he looks forward to pushing himself to new limits.

“I’m certainly looking to compete at the NCAA Championships … and hoping to place first at the Ivy League Championships within my four years at Yale,” Ditto says. “[Flipping] is what motivates me to keep going: they really look cool and spinning fast is what I love to do.”